In the mid-19th century, an immigrant fleeing horrific violence arrived in America. He quickly assimilated, adopting an American-sounding name and identity, although he continued to pine for the homeland that he had to abandon. This individual’s story is either that of any number of Jewish immigrants… or Superman. 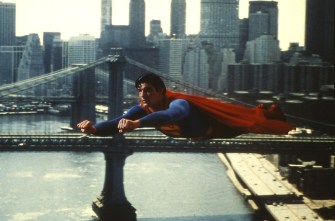 Christopher Reeve as Superman in the 1978 film of the same name. Still captured by Flicker user Rogelio A. Galaviz C.

Why Superman is the ultimate immigrant

Superman was created by Jerry Siegel and Joe Schuster, the children of Jewish immigrants who had come to North America to flee Europe’s growing anti-Semitism. Together, they crafted the platonic ideal of superheroes.

“What led me into creating Superman in the early ’30s?” said Siegel. “Hearing and reading of the oppression and slaughter of helpless, oppressed Jews in Nazi Germany… seeing movies depicting the horrors of privation suffered by the downtrodden. I had the great urge to help the downtrodden masses, somehow. How could I help them when I could barely help myself? Superman was the answer.”

Numerous aspects of Jewish history and culture are reflected in Superman’s story. When the Egyptian Pharaoh ordered all male Jews to be drowned in the Nile, Moses was saved by being placed in an ark on the riverbank. Likewise, Superman was saved from his planet’s destruction by being sent to Earth in a small, cradle-like spaceship. Superman’s name — Kal-El — can be interpreted in Hebrew as meaning “voice of God.” His abilities, too, also have a connection with Jewish folklore; in 17th-century Prague, a rabbi was said to have made a golem out of river clay. The golem possessed incredible strength and defended the Jewish community against the city’s anti-Semitic pogroms.

Like Schuster’s and Siegel’s parents and other Jewish immigrants fleeing persecution, and the later Holocaust, Superman also fled the chaos and violence that eventually overtook his home. Superman’s regret and wistfulness for Krypton mirrors the experience had by the millions of Jews fleeing their homes in Europe.

Once those Jews arrived in America, they took to assimilating as quickly as they could. Many had their own secret identities, just like Kal-El and Clark Kent. Jerry Siegel’s father was originally named Mikhel Iankel Segalovich, but he chose to adopt the more American-sounding Michael Siegel after arriving in New York in 1900. Other Jewish immigrants did the same, notably Jacob Kurtzberg, who would later become the famous comic book artist Jack Kirby.

Superman became a way for Schuster and Siegel to exercise some degree of control over the events that were transpiring in Germany. The Man of Steel wound up fighting the Nazis even before America entered World War II. In one comic, Superman lifts Hitler up by the neck and proclaims, “I’d like to land a strictly non-Aryan sock on your jaw.” In fact, Superman’s cultural heritage was so clear that even Goebbels is said to have written, “This Superman is a Jew!”

But there are reasons to be skeptical

While these parallels make it tempting to do the same as Goebbels and assert that Superman is Jewish, there are some who contest this idea. You can’t really claim a fictional character belongs to a certain faith unless that’s stated in their history, such as the X-Men villain Magneto, who did live, during his youth, in a concentration camp. Furthermore, critics of the Jewish Superman theory have also been able to poke holes in some of the pieces of evidence.

Kal-El, for instance, could be rendered in Hebrew in a number of different ways, many of which are nonsensical — which is what you would expect when translating a fictional name to another language. Superman’s flight from his doomed world Krypton only became a part of the hero’s backstory after Siegel and Schuster had stopped writing for Superman, which weakens, in some aspects, the idea of Superman’s Jewish roots. However, it may not invalidate the overall Jewish parallels in the character.

The critics have some points, and we probably have to admit that Superman doesn’t observe the Sabbath or don a yarmulke. After all, why would an alien convert to one of Earth’s religions? But the fingerprints of Jewish history are nevertheless all over Superman’s story. Even if the parallels were unintentional — this seems unlikely given their number — artists always put a bit of themselves into their creations, and it seems likely that Siegel and Schuster did too.

There is more consensus on what heaven looks like than hell.
The Past

For the first time in nearly 1500 years, fewer than half the people in England and Wales consider themselves Christian.
The Future

A vertical map might better represent a world dominated by China and determined by shipping routes across the iceless Arctic.
Up Next
Health

The maxim ‘use it or lose it’ is wrong, researchers say. Here’s why.

A new review article makes the case that you can always use it.