Deciding how to vote has taken on another meaning this year, with an unprecedented number of Americans voting by mail in hopes of avoiding the pandemic. Given the highly variable nature of voting regulations in the United States, some areas are seeing improvements in the ease of voting while others are finding out there is only one drop box for absentee ballots per county.

As part of their regular efforts to rank voting procedures, a team of researchers has listed all 50 states in order of how simple or difficult they make voting and highlighted the extreme fluctuations that some states have made over the past four years.

Political scientists Scot Schraufnagel of Northern Illinois University, Michael J. Pomante II of Jacksonville University, and Quan Li of Wuhan University in China compare the ease or difficulty of voting in each state with their “Cost of Voting Index.”

As in previous years, the research team created an index allowing them to rank each state’s laws and regulations concerning aspects of voting.

This included considerations of when voters had to register by, if felons could vote or register, if registration drives were allowed, if automatic registration policies existed, if voting was a state holiday, how many voting stations were in each state, how complex it is to request a mail-in ballot, how long polling stations are open, how many documents are needed to register and vote, and other such concerns.

Taken together, these questions consider all facets of being able to vote, from how difficult it is to register to the trouble of actually getting your ballot, either by mail or in person. Each issue was broken down into various considerations and scored. Those considerations that made voting more difficult (for example, a rule not allowing felons to register to vote while in jail) earned more points than those that made voting more accessible.

After scoring the states, the researchers organized them in a convenient list with the states where voting is most straightforward on top. 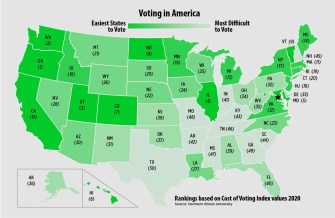 A map showing where voting is easy (low numbers) and where it is more difficult (high numbers). Northern Illinois University

As you can see from the above map, Oregon retained its top spot on the strength of its automatic voter registration policies, extensive vote by mail program, and myriad opportunities to vote early. Washington and Utah, with their similar vote by mail programs, round out the top three.

Despite lacking the same vote by mail programs as the previously mentioned states, Illinois made it to fourth place on the strength of its absentee voting policies.

The other end of the scale features Texas, Georgia, Missouri, and Mississippi. Texas earned its low score partly because of its declining number of places to vote and registration cut off 30 days before the election.

By comparing these results with those of 2016, it is no issue to see where voting is getting easier and where it is getting more difficult. Perhaps more importantly, it allows us to see what policies can cause which outcomes.

Those interested in making it easier to vote in their state can look to the reforms passed in Virginia and Michigan for inspiration. This year, Virginia’s state government passed a slew of reforms making voting more accessible, including an automatic voter registration law and the designation of election day as a holiday. This allowed the state to move up 37 spots to its current position of 12.

Michigan passed similar reforms by referendum in 2018, allowing it to move up 32 spots to 13.

They can also take heart at the authors’ references to studies showing that some of these reforms, such as online voter registration, actually reduce the administrative costs of running elections, making them very attractive for those interested in governmental efficiency. Additionally, lead author Scot Schraufnagel suggests that making it simpler to vote can increase turnout.

On the other hand, if you want to make it more difficult to vote, the index shows you how to achieve that too.

West Virginia, Missouri, and Iowa all fell 19 spots over the last four years. Co-author Michael J. Pomante explains that these declines are caused in part by the lack of “a willingness to modernize their policies to ease the difficultly of voting and stay current with election law trends we see in many other states.”

It is worth noting that this report was published on October 13and was based on information collected before that time. Some of the ratings might be slightly outdated in light of shifting rules on where and when ballots can be returned in some states. However, the report does include a separate section for changes made in response to the pandemic.

Curiously, while many states in the middle of the pack moved around dramatically in the rankings due to their responses, the top and bottom four appear to have remained the same.

How straightforward voting is in the United States is highly variable based on where you live. While some states strive to make it as easy as possible, others retain laws making participation in our democracy burdensome and time-consuming. This index provides a way to understand how our democracy evolves over time and what makes it more accessible to more people.

What will be done with that information is up to the people.

Unreasonable burdens prevent people from thriving. Eliminate them.
Up Next
Neuropsych

Finally, a podcast that addresses our crisis of meaning

How can we learn from the lessons of the past and build a better future?