The Smithsonian National Museum of American History has recently expressed interest in acquiring drawings from formerly detained migrant children. These drawings emerged after the American Academy of Pediatrics toured the detention facilities at the U.S. border.

A.A.P. members were shocked not only to discover the condition of the detention camp and lack of proper pediatric doctor access for the children, but also their melancholic drawings. Many of which featured cage and bar imagery.

A representative of the museum has confirmed that it is their intention to explore this acquisition as the museum believes that it’s important to broadcast this type of art. The Smithsonian is on record stating:

“The museum has a long commitment to telling the complex and complicated history of the United States and to documenting that history as it unfolds, such as it did following 9/11 and Hurricane Katrina, and as it does with political campaigns.” 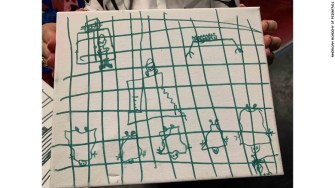 Source of the drawings

A.A.P. staff member, Dr. Sara Goza, took the pictures of the drawings at the Catholic Charities of the Rio Grande Valley Humanitarian Respite Center. This center is a halfway resting spot for families just released from the detention facilities. Most families don’t stay more than a day before going to find family members or sponsors.

Sister Norma Pimentel, the executive director of the organization, told Dr. Goza that the three artists were 10 and 11 years old, but she did not know any of their names.

Two of the drawings are stick figures with prominent cage imagery drawn over them. There seems to be figures lying on the floor with a hat-wearing figure staring down at them. Another drawing shows only a couple of toilets overlaid with bars.

The Smithsonian’s discovery of the drawings were from Dr. Goza’s photos. For some, the photos have become a symbolic representation of the migrant plight.

Sister Pimentel has said that there were many drawings created by the children and not all of them were about being behind bars.

“Here, children have an opportunity to be children again, because they’ve been scared and they’ve seen their parents crying. . . I believe that these children show a lot of resilience. Many of their drawings show very positive things, and that’s something that’s very beautiful.”

In a statement to NPR, Brent Glass, director emeritus of the National Museum of American History said that he believes this potential art acquisition is a way “to inspire people to know more about American history and to hopefully create a more humane society.”

Glass also claims that this was not a political decision, but one that reflected the Smithsonian’s work and mission to collect works that are culturally relevant for a certain time period. While he noted that there is some “political implication or consequence” in these drawings, the overarching intention is to create some kind of documentary record rather than making an overt political statement.

The museum has a massive collection of more than 1.8 million objects, some of those being artifacts from the border with Mexico. These drawings would simply be keeping with the tradition of their mission. That is, to “explore the infinite richness and complexity of American history.”

Tags
artimmigrationimmigration enforcementunited states
In this article
artimmigrationimmigration enforcementunited states
Related
High Culture
Did Paul Cézanne hide an early self-portrait underneath a 160-year-old still life?
To answer that question, we may have to figure out when the famed painter started to go bald.
Thinking
Creative wisdom from Rick Rubin: Embrace your inner gatekeeper
Unlock the full potential of your creativity with holistic detachment. This is the way of the editor.
The neuroscience of loving music
Humans are musical animals four million years in the making, explained by music expert Michael Spitzer.
▸
8 min
—
with
Michael Spitzer
High Culture
The most controversial painting in Russian history
Created in the 1880s, “Ivan the Terrible and His Son Ivan,” which depicts a father murdering his son, divides Russians to this day.
Strange Maps
What’s better than maps or stamps? Maps on stamps!
When maps meet stamps, you get a love child called “cartophilately.”
Up Next
The Present
Understanding the last three-year cryptocurrency rollercoaster
The global financial system is under an increasing amount of pressure to get with the times and evolve to the needs of its customers. Crises like the 2008 housing bubble’s […]