Two weeks ago, a friend told me about a work training she had recently attended. During her company’s national meeting, which included a few hundred employees, a comment by one motivational speaker stuck out. While discussing best practices at work, the male speaker looked at the predominantly female crowd and, in an effort to discuss the parameters of their roles, mentioned, “and make sure to put on makeup every morning.”

Innocuous, or so it seems to some (such as that man). Yet his directive points to a problem, at least in a few informal surveys I conducted on my Facebook pages. It has become such a common utterance that makeup equals presentable that we never pause to reflect on such “wisdom.”

The 100-plus responses I received were varied, as can be expected. While I asked that only women reply, a few men inserted themselves, though mostly in support of female choice. Men feeling the need to voice an opinion when it doesn’t concern them is a driving and under-discussed factor in the #metoo era — under-discussed, at least among men. Which is the problem.

A few women that replied feel makeup necessary in their workplace. Most declare they enjoy wearing it. I noted in the question that this was not a screed for or against makeup. The ability to choose for yourself, as well as, in my mind, the broader issue of what’s required to be “presentable,” was the intention of the question.

Alicia Keys On Going Makeup-Free, Life: ‘I Just Want To Be Honest With Myself’ | TODAY

Alicia Keys On Going Makeup-Free, Life: ‘I Just Want To Be Honest With Myself’ | TODAY

While this was effectively a public poll given that my Facebook pages are not private, I will not quote anyone by name out of respect for privacy. That said, here are a few sentiments by the women who spoke them.

A number of responses included an eye roll, which wasn’t necessarily gender-based.

“It makes me feel the equivalent of an eyeroll. There are still plenty of women in the workforce who feel the same as that man, though. I would feel the eyeroll if a woman said it, too.”

A consistent point was that “showing up” does need need to require makeup.

“The speaker was an airhead to pose it that way — he probably just meant go out looking like you care what you look like. . . well groomed would have been too male oriented; maybe he should just have said ‘take some time to make sure you are showing your best face to the world.'”

An equivalence was entertained by a few.

“Did he also mention a ‘shave your face’ or some other gender equivalent that is an esthetic choice?”

“It’s like telling men they must shave & have short hair. I get “look presentable” and offering perimeters that serve everyone. Telling women they must wear make up or dye their hair is sexist.”

“We should be celebrating natural beauty. Makeup masks/augments to fit societal norms. So that’s a hard NO. If he wants me to wear makeup make sure he recommends putting a sock in his drawers to augment things too.”

Perhaps the most honest equivalence of all:

“If we take this to its logical conclusion all men better be going to work naked because the origin of makeup is to emphasize the lips to remind men of the female vulva in order to attract for purpose of sex. Also emphasizing the eyes so they appear bigger and make her look younger and therefore fertile. Therefore the only equivalent advice would be for men to emphasize their entire body and go to work buck naked.”

Of course, certain professions demand it:

“Unless the job he is referring to is as a circus clown or a performer of some type where makeup is necessary for the job regardless of gender, then this is outrageously offensive.”

For one, it’s about “showing up” as an inner feeling.

Really, though, it comes down to one thing:

“Although I do feel more ‘put together’ (appearance wise) when I wear makeup, I can kick ass with or without it and I certainly don’t want anyone telling me that I SHOULD wear it, especially not a man. If a woman wants to wear it and feels better about herself when wearing it, good for her!”

Perhaps no sentence better sums up the overall sentiments than this:

“Men need to STOP TELLING WOMEN WHAT TO WEAR.” 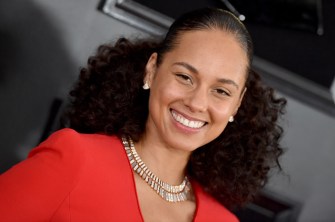 Commenting on a random Facebook post is one thing, yet this sentiment is being expressed broadly. Alicia Keys turned up at this year’s Grammys sans make-up, a decision she made three years ago. Keys has consistently used her popular social media platforms to express her feelings on the topic.

Articles often conclude with a pithy synopsis of the topic at hand, yet this one — the broader question of men telling women what to do — will likely continue for the foreseeable future, though that too is changing. The fact that this and similar questions are being taken seriously is a positive step forward.

Maybe we’re simply overthinking this, though. Perhaps it really is as simple as one anonymous meme that floated around last month after an entire contingent of men became irate over a razor company supporting the #metoo movement: “I guess Gillette razors aren’t so good for sensitive skin after all.”

Tags
beautychoicefashionfeminismwomenwomen in business
In this article
beautychoicefashionfeminismwomenwomen in business
Related
Health
Why are people sexually attracted to cartoons? Evolution.
Nikolaas Tinbergen’s concept of “supernormal stimulus” explains why humans are attracted to a heightened version of reality.
Neuropsych
Beauty bias: hopefully the judge finds you attractive
Justice is not blind to beauty.
The Past
The misguided history of female anatomy
From “mutilated males” to “wandering wombs,” dodgy science affects how we view the female body still today.
Diversity & Inclusion
Navigating the fifth trimester: Why working parents need better support
A textbook pregnancy consists of three trimesters. The baby develops at a relatively predictable rate during this time, from pomegranate seed to avocado to watermelon. And mom’s body adapts accordingly […]
The Past
Just when the Middle Ages couldn’t get worse, everyone had bunions
The Black Death wasn’t the only plague in the 1300s.
Up Next
Starts With A Bang
Here’s How To See Uranus And Mars Meet In The Sky This Week
The first planet beyond ‘naked eye’ astronomy will pass within just 1° of Mars.Although there are eight major planets in the Solar System, most of us never see Uranus or Neptune.Voyager […]