Searching for patterns is how we make sense of the world. We look for meaning in the often-overwhelming chaos by making connections between symbols and events. Some times these are meaningful discoveries, resulting in good science and breakthrough insights. Other times, these patterns may lead nowhere but still help us focus energies on what’s important.

One intriguing source of patterns that has emerged thanks to our development of computers is the Bible. Among humanity’s oldest and arguably most influential pieces of writing, the Bible has been studied and analyzed phrase by phrase by countless scholars and devotees. But what computers have allowed us to do, thanks to the work of Israeli mathematicians, is to see that the ancient text may be not only an intricately-weaved collection of spiritual stories and teachings but a code that speaks to the inner workings of history.

“The Bible Code,” a 1997 book by the reporter Michael Drosnin popularized the idea. His book claimed to use the earliest parts of the Bible to predict the assassination of the Israeli Prime Minister Yitzhak Rabin, the Gulf war, and comet collisions. It also seemed to have information about the Holocaust, various other assassinations like those of JFK and his brother Robert. It similarly suggested a nuclear war was looming – a theme the author explored in subsequent books of the “Bible Code” series.

The inspiration for Drosnin’s book came from the 1994 paper “Equidistant Letter Sequences in the Book of Genesis,” published in the journal Statistical Science by mathematicians Doron Witztum, Eliyahu Rips and Yoav Rosenberg. They presented statistical evidence that information about the lives of famous rabbis was encoded in the Hebrew text of the Book of Genesis, hundreds of years before those rabbis lived.

Dr. Eliyahu Rips is one of the world’s leading experts on group theory and is the scientist who got most closely associated with the “Bible Code” hypothesis, even though the software used to implement the word search was designed by both Rips and Witztum. 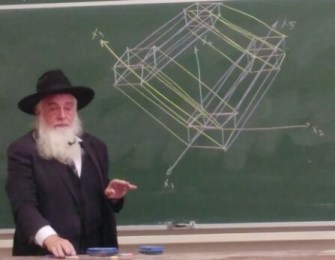 Rips later distanced himself from Drosnin’s book. In a 1997 statement on the matter, he pointed out that he didn’t make or support some of the specific predictions Drosnin claimed. Nonetheless, Rips wrote quite clearly that “the only conclusion that can be drawn from the scientific research regarding the Torah codes is that they exist and that they are not a mere coincidence.”

The method used by the scientists to arrive at their conclusions is the Equidistant Letter Sequence (ELS). To get a word with some meaning, this method calls you to pick a starting point in a text and a skip number. And then, start selecting letters while skipping the same number of spaces every time (pretty much in any direction). If you’re lucky, a sensible word will be spelled out. This method works well if letters are arranged in an array, like this one –

The Bible Code made a recent re-appearance in the public consciousness thanks to the work of author and fourth-generation antiques expert Timothy Smith. His 2017 book “The Chamberlain Key” describes how following 25 years of research, he unlocked a “God code” in the Bible. He calls his book “the Da Vinci Code on steroids, but it’s true.”

Smith’s decoding work is based on his own ancient copy of the Bible titled “The Leningrad Codex” – it’s the oldest complete manuscript of the Hebrew Old Testament. Smith used a computer-driven application of the ELS method, as well as code-breaking techniques and his intimate knowledge of ancient and aboriginal ceremonial devices like scepters, crowns and thrones to arrive at his reading of the Bible.

Smith is a devout Christian and his conclusions revolve around Christian motifs. In particular, he claims to have found detailed informations about Jesus’s birth, crucifixion and resurrection within a passage in Genesis.

The book has received a special on the History channel and a documentary series is being made about the travels leading to Smith’s discoveries.

David McKillop, the executive producer for Jupiter Entertainment, which is creating the TV series, said that “Tim’s quest is the ultimate treasure hunt for one of history’s greatest mysteries, and his map is an ancient text that could possibly be talking to us.”

If you think there can’t possibly be any pattern in the Bible and other long texts may produce similar results – there are studies for you too. The Australian computer scientist Brendan McKay famously came up with a table of assassination predictions in “Moby Dick”.

While the Bible or “Torah Codes” can be criticized, there is scholarly evidence that ancient writers of the Bible, like Matthew, “consciously used numerical patterns or codes in their compositions,” as writes Dr. Randall Buth, the director of the Biblical Language Center and a lecturer at the Hebrew University in Jerusalem.

Another factor we should keep in mind that our understanding of how time and history work very much depends on our frame of reference. If time flows differently, for example as proposed by the Block Universe Theory, all bets would be off and a book could theoretically contain the code of history both of the past and the future.

Tags
biblebookschristianitycodecomputer sciencecomputersjudaismmathreligionstatistics
In this article
biblebookschristianitycodecomputer sciencecomputersjudaismmathreligionstatistics
Related
Neuropsych
Memory and the benefits of forgetting
Forgetfulness isn’t always a “glitch” in our memories; it can be a tool to help us make sense of the present and plan for the future.
Thinking
Creative wisdom from Rick Rubin: embrace your inner gatekeeper
Unlock the full potential of your creativity with holistic detachment. This is the way of the editor.
Thinking
“Give a f***, actually”: The surprising benefits of being grateful for things you dislike
Radical Emotional Acceptance calls on you to celebrate all of life’s emotions — even the negative ones.
Thinking
Visual thinking: How to understand the inner lives of animals
Humans are good visual thinkers, too, but we tend to privilege verbal thinking.
The Past
How the death of alchemy gave birth to modern science
Far from practicing witchcraft, the experimentation of medieval alchemists helped bring about the Scientific Revolution.
Up Next
Life
Orangutans exhibit awareness of the past
Orangutans join humans and bees in a very exclusive club