As members of society and as consumers of information we have been discussing quite extensively in social and commercial media the puzzling reasons as to why so many people with different levels of education and financial means would blindly negate facts that are self-evident and well-known in order to defend a position which is, more than anything else, ideologically based. In other words, what makes a person espouse an ideology so intensely as to negate the reality of well-established facts? Examples are easy to come by: Earth is flat; vaccines are bad for you; there is a deep state conspiracy bent on changing the world order; global warming is a hoax; there was no holocaust; there were no dinosaurs; we never landed on the Moon. You can add your own [here].

This list intentionally mixes two very different attitudes people have to certain facts: denial and negation. There is an essential distinction between the two which is often overlooked: negation looks to the past, while denial looks to the present and the future. In English, this distinction is not as clear as in Romance languages: people tend to use denial, as in holocaust denier, and to “be in denial.” But it may be time to sharpen this distinction, to make it more effective and, hopefully, to have more clarity.

A negationist is a conscious liar. It is someone who’d rather live in a fabricated reality based on a fabricated past, even if this may mean negating the suffering of millions.

Negation requires a conscious choice to partake in a lie. Someone who negates the holocaust does so by asserting that it didn’t take place, choosing to ignore historical facts, documents, and narratives that are well-established and beyond questioning. To negate the lunar landings, the sphericity of Earth, or that dinosaurs ever existed is a conscious choice to ignore scientific data that is accessible to everyone. A negationist is a conscious liar. It is someone who’d rather live in a fabricated reality based on a fabricated past, even if this may mean negating the suffering of millions. A negationist lives in a world that only exists in their mind, usually motivated by self-interest; power or money, mostly.

Denial is different. Surprising as it may seem, we are all very good at denial. We may deny that we are sick, or that the person we love doesn’t love us back, or that we are not competent to do a job. Sports fans of losing teams deny the reality and go back to the stadium with hope refreshed. When we say, “John is in denial,” we mean that John doesn’t want to face reality as it is. This may explain why so many more succumb to denial than to negation. Reality is often hard. We may be broke; we may be lonely; we may be lost in life. In 1973, the American cultural anthropologist Ernest Becker published the Pulitzer Prize-winning book The Denial of Death, where he argued that we create elaborate defense mechanisms to protect us from the certain knowledge of our mortality. How do we do it, day in, day out, knowing that the end is inevitable? Becker argued that we are able to do this due to our dual nature, at once physical and symbolic. As animals, we are aware of our physical needs and limitations. As symbolic creatures, we contemplate the infinite and the divine; we tell stories of heroic feats that defy the reality at bay. 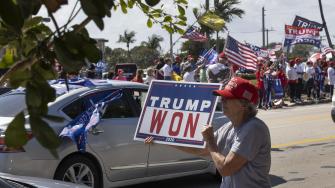 Trump supporters lined the street on President’s Day to show support for him after his 2020 election loss to President Joe Biden.Credit: Joe Raedle/Getty Images

We can thus begin to see why so many people in the US have chosen to deny the reality of the Biden-Harris election, or that masks and social distancing are essential tools to beat the pandemic. When ex-president Trump claimed that there was a plot to steal the election from him, he positioned himself as the hero-martyr, the victim of a destructive plot that was after him and, by proxy, also after everyone who supported him. He used the old trick of galvanizing a visceral group response by creating a fake reality that bundles people together in a single cause: he made his followers into heroes fighting for freedom. The no-mask using is a clear illustration of how far this identification of “fighting for freedom” can go, even to the denial of the obvious danger of dying from COVID. This shows that our symbolic allegiance is more powerful than the physical. No wonder so many people are ready to “die for a cause,” often with tragic consequences.

Deniers find force in their cohort, energizing each other and relying on group dynamics to find companionship and strength. Tragically, by forcing our physical separation in lockdowns, the pandemic worked as a catalyst to the deniers, their perceived “loss of freedom” bringing them closer together to the point of making them all believe in the heroic dream of a power takeover. The attack on the Capitol on January 6th is the epitome of denialism in modern America, from both sides of the aisle: the perpetrators who marched and pillaged and those who failed to read the obvious signs of mounting danger, denying the reality in front of them. 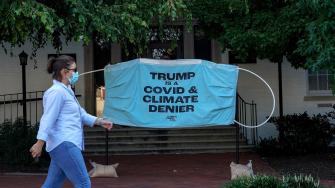 Science denial — or is it science negation? A protest banner set up in front of the Republican National Convention Headquarters on August 24, 2020, in Washington, DC.Credit: Jemal Countess/Getty Images for Climate Power 2020

Climate change conflates both negation and denial. There is conscious lying from various interest groups—mostly large corporations that greatly benefit from the fossil fuel industry, as flagged in this article from The Guardian exposing 100 companies as responsible for 71 percent of global carbon emissions—that aim to cloud and discredit past results from the scientific community (global warming is a “hoax”), and there is denial from many well-informed people, who simply choose not to believe that they actually can do something to change the situation.

“I’m just a person, what can I do to change this massive, worldwide problem?” Well you can do many things: As a consumer, you can boycott companies that don’t align with your worldview or that ignore their impact on the world’s climate; you can consume less fossil fuels, turn unneeded lights off, use less water, buy a hybrid or electric car, use more public transportation (once it’s safe again), eat less meat (perhaps the most impactful individual choice one can make to fight global warming)…

Although there are nuanced distinctions within negationism and denialism, by exposing their more obvious differences it may be easier to find constructive solutions that move us beyond the current climate stalemate. We need to turn climate change denial on its head, and make us all the new heroes of the “save the future” cause. Because the truth is, as climate change deteriorates our living conditions, we will all be the martyrs of our own failure to see what’s in front of us.

In a world without "bullshit jobs," we would have more hours available to us to learn new skills and to unleash our creative side.
Up Next
Health

Become a Sam’s Club member for less than $30

For a limited time, you can get a one-year Sam's Club Membership for half off, plus some other goodies.