If you like to Netflix and chill, you might want to try Manbang and chill. Only if you happen to be in North Korea that is. The reclusive country unveiled a new on-demand streaming service  called “Manbang“.

Actually in Korean the word “Manbang” means “everything”. Of course, in English it may lead some to consider other meanings.

Manbang is a service of KCTV or Korean Central Television, the state-run Korean TV. The way it will work is that users will using a device like a Roku set-top box to connect through a state-controlled intranet to a collection of viewing options.

Certainly, “options” may be a strong word as the content will be mostly propaganda, focusing on North Korea’s history and government. It will also offer language courses in English and Russian.

KCTV announced in a report on the new service that Manbang will show North Korea’s “socialist cultural power” as its people will be able to watch their country “make a leap forward every day, every hour.”

In the report, a North Korean kindergarten teacher And Kim Kum-hee, is excited that Manbang will also help children watch their favorite programs, saying:

“Kids really love [Manbang]. They just used to read books from school but now they can look at the screen and understand what these animals and plants look like. I can see that their concentration levels have improved.”

Here’s that KCTV report, in case you want to hear it from the source:

Of course, it bears noticing that North Korea doesn’t make Internet available for everyone, mainly just to government officials and some select people, who are always closely monitored.

Most people in North Korea have access to a walled-off intranet called Kwangmyong. That small network has just a few thousand government-controlled websites.

Netflix actually acknowledged this new player in the streaming market by adding “Manbang knockoff” to its Twitter profile. 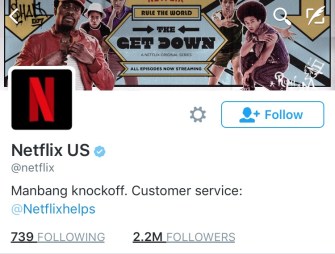 Is Juche the state religion of North Korea?

Is Juche an ideology, a scam, or a very strange religion?
The Present

What is Juche, the state ideology of North Korea?

Is it the key to understanding why North Korea acts like it does, or an elaborate sham?
The Present

Did Trump abandon South Korea at the North Korean summit?

Eugene Gholz, the associate professor of political science at the University of Notre Dame, posits that President Trump’s decision to suspend U.S. military operations on the Korean peninsula negates decades of foreign policy.
▸
with
Eugene Gholz
The Present

Why the World May Be Safe with More Nuclear Weapons, Not Fewer

What’s really involved in snuffing out a country’s nuclear capabilities—and is that the right war to be waging?
The Present

America Is Preventing Nuclear Attacks in All the Wrong Ways

There’s a deep psychological reason that America treats nuclear weapons like a spoiled child hogging all the neighborhood candy. Are we too paranoid to see it?
▸
7 min
—
with
Barry Posen
Up Next
Think Again Podcasts

Spontaneous, deep talk on surprise topics. On this week’s episode of Think Again – a Big Think podcast, Alison Gopnik, one of the world’s foremost experts on child cognition, learning, and development, and host Jason Gots discuss play, artificial intelligence, and the trouble with “parenting” as a verb.