Scientists are closer to creating a hacker-proof quantum internet thanks to a promising new invention. A team led by the University of Bristol in the U.K. found a method of securing online communication that relies on the laws of physics.

The approach aims to make any message sent over the internet interception-proof.

The study’s lead author Dr. Siddarth Joshi, of the university’s Quantum Engineering Technology (QET) Labs, called their work a “massive breakthrough” that makes quantum internet possible. The potential of such a network has run into tremendous costs, resources, and research time while sacrificing security. What the researchers created is “scalable, relatively cheap and, most important of all, impregnable,” shared Joshi, adding that “it’s an exciting game changer and paves the way for much more rapid development and widespread rollout of this technology.”

With hackers seemingly always a step ahead of any protections we’ve been putting in place on our current internet communications, there’s strong motivation for finding a much more secure alternative that wouldn’t lead to expensive and damaging privacy breaches. But while’s it been hailed for decades as a possible solution, quantum internet hasn’t yet been devised to the point of usefulness.

One method of secure encryption already invented, called quantum key distribution, relies on transmitting photons – particles of light. This can be used to share information between two users, using a secret key to encrypt data. The drawback of this tech – it needs a large infrastructure to expand, with each user requiring a separate transmitter and receiver.

“Sharing messages in this way, known as trusted nodes, is just not good enough because it uses so much extra hardware which could leak and would no longer be totally secure,” Dr. Joshi explained.

What Joshi’s team came up with utilizes quantum entanglement, the ability of two particles at different locations to mimic each other. The developed system also sports traffic management that helps control the network, allowing to prioritize user connections.

“Instead of having to replicate the whole communication system, this latest methodology, called multiplexing, splits the light particles, emitted by a single system, so they can be received by multiple users efficiently,” elaborated Dr. Joshi. 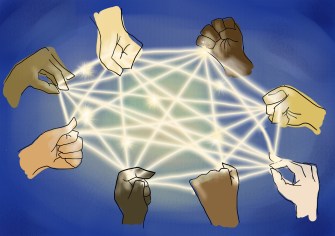 In fact, the researchers were able to make a network for eight users that only needs eight receiver boxes, not 56 as would be the case under the old approach. The boxes were linked to Bristol’s optical fiber network and were successful in sending messages using the quantum communication. Not only was this very secure but the technique relied on existing technology, requiring less hardware and much less financial investment. Previous quantum systems spent years in construction, with costs running into millions and even billions. The new network was made in just months for under $400,000.

The relatively low costs allow the multiplexing entanglement technology to be scaled up widely, propose the scientists, who think they can be “serving not just hundreds or thousands, but potentially millions of users in the not too distant future,” as stated Dr. Joshi.

Check out the new research in the journal Science Advances.

Like it or not, we are the descendants of busybodies.
The Present

Are people lying more since the rise of social media and smartphones?

The belief that lying is rampant in the digital age just doesn’t match the data.
Neuropsych

Why are men more likely to seek relationship help online?

A recent study illuminated surprising differences in how men and women seek help when struggling with relationships.
Thinking

The infamous misogynist had some profound insights on romance.
Up Next
Starts With A Bang

The novel coronavirus COVID-19, as illustrated here against a backdrop of a DNA molecule, contains only approximately 30,000 base pairs in its entire sequence, yet is capable of infecting and […]