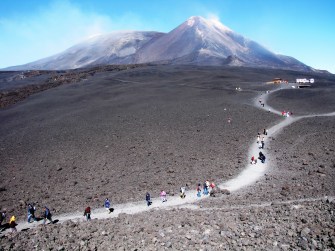 Etna’s summit is surrounded by a vast moonscape, ‘refreshed’ by frequent eruptions

Mount Etna, in eastern Sicily, almost never sleeps. It’s Europe’s most active volcano and has been for millennia. For the ancient Greeks, it was the location of the mythical forges of Hephaestus, the god of blacksmiths.

Etna is Italy’s highest peak south of the Alps, although the exact height of its summit (currently 10,912 ft, or 3,326 m) varies due to eruptions. Covering an area of 459 sq mi (1,190 km2), it’s also the largest of Italy’s three active volcanoes (the others being Vesuvius and Stromboli). That gives the locals a lot of room to play cat and mouse with its destructive lava flows.

A string of towns garland Etna, its inhabitants attracted by the volcanic debris that crumbles into fertile soil for the orchards and vineyards on its lower slopes. But Etna takes as well as it gives. Over the centuries, many of those towns have been destroyed again and again by the restless mountain.

But Etna is not just a geological hotspot, it’s also a unique place on the map. Zoom in, and you see a bunch of lines converge on its summit. The very tip of Mount Etna is the meeting point of ten Sicilian municipalities. That makes it the only decipoint in the world.

The bizarre territorial fragment of Neutral Moresnet on an early-20th-century postcard.

To provide a sense of how rare that is, imagine this: there are hundreds of international tripoints in the world – places where the borders of three countries meet. But increase the number of countries by one, and that number falls to… zero.

That’s right, there are no international quadripoints in the world, although for a hundred years, the world did have one. At the Vierlandenpunt (‘Four Countries Point’) in Vaals, the Netherlands, Germany, Belgium and Neutral Moresnet met (see also #41). But the latter territory was abolished after World War I, reducing Vaals to a rather workaday Drielandenpunt.

In the current geopolitical landscape, one other point comes close: at the eastern tip of Namibia’s Caprivi Strip, where it borders Zambia and Botswana, about 200 meters in the Zambezi River separate Namibia from Zimbabwe. But for that distance, the river would contain the world’s only current international quadripoint. 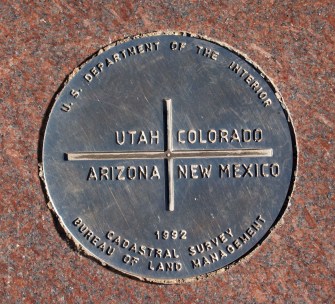 In the middle of nowhere, four states meet

Go down an administrative level, and of course you have the famous Four Corners – the meeting point of the U.S. states of Utah, Colorado, New Mexico, and Arizona. The monument, in the middle of nowhere, provides you with the opportunity of standing in four states at the same time — though, for some (who shall remain nameless), that thrill does not outweigh the long desert ride to get there.

It’s the only such state-level point in the U.S. At lower administrative levels, quadripoints are not that rare; but again: add a number and the numbers drop vertiginously. The U.S. has only one county-level quintipoint, for example: the middle of Lake Okeechobee in Florida is where Okeechobee, Palm Beach, Hendry, Glades, Okeechobee and Martin counties meet.

Only one in the world

Double that figure, and there’s only one point like it in the world: the summit of Mount Etna. As this map shows, 10 communes reach out to touch the top of the mountain (and each other). Here’s a brief description of each, clockwise from top: 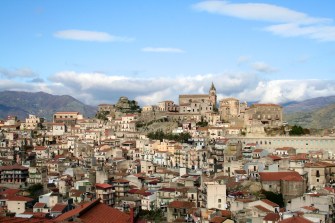 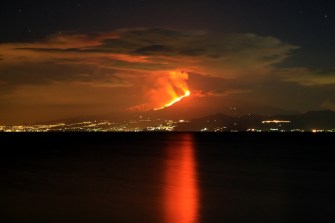 Lava flow from Etna during an eruption in January 2011. 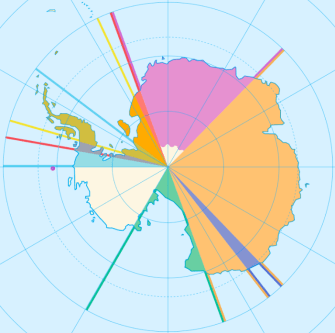 A number of territorial claims converge on the South Pole

Due to Maletto’s semi-enclaved situation, you could argue that not 10 but 11 separate territorial units meet at Etna’s summit. Either way, it’s a lot. The reason for this unique situation is the active volcanic state of the mountain. This renders the summit and large areas around it virtually impassable. Yet municipal authority, like nature itself, abhors a vacuum. So the surrounding towns set their limits not where their houses or fields end — those limits would be variable anyway, due to the vagaries of the mountain — but at the furthest possible point: the mountain’s top.

Some will say that a similar situation occurs at the South Pole, where various, partly overlapping claims have also created a decipoint. But since the Antarctic Treaty of 1961 has effectively frozen all territorial claims in Antarctica, that decipoint at the bottom of the world is a decidedly theoretical one. To visit the world’s only “live” one, climb the roof of Hephaestus’s forge, and pray he’s not about to beat on his anvil.

The cause of the recent uptick in radiation is unknown, but speculation about another catastrophe at Chernobyl is hyperbolic.
Up Next
The Present

Those silky tea bags might be releasing plastics into your digestive system.