In the last installment of “How Plastic is Destroying Us,” we discussed the billions of microplastic particles being leeched from tea bags into your mug. It turns out such particles are turning up in the darndest places. A new study, published in Environmental Science & Technology, reveals another unfortunate locale: the digestive tract of earthworms.

Outside of fishing and post-rainy day sidewalks, most of us pay little attention to endogeic worms, the class of worms that live in the top soil. That doesn’t mean they lack importance for our survival. By feeding on soil, these wiggly critters—Aporrectodea rosea, rosy-tipped earthworms—mix minerals and air into the soil, which helps, among other things, plants to sprout. Worms are an essential component of our agricultural system.

Microplastic contamination is a growing concern for soil health, yet, as the team writes, it has not been well-studied. Fertilizer made from sewage sludge, rain, and airborne fallout are all means for these particles to settle into the earth. The long-term impact could include stunted soil biodiversity.

We often mistake broad names for processes as “extra.” For example, dark matter, which represents 85 percent of all matter in the universe, is believed to non-baryonic, yet physicists recognize that it could be comprised of subatomic particles we haven’t yet discovered. The universe isn’t know for creating filler; usually, our own ignorance is the culprit.

“Dirt” and “soil,” to non-farmers at least, are often treated as an earth layer; referencing it is often in the negative, as when a parent scolds a child for “playing in the dirt.” But soil is a process, living and organic, dependent on decaying and dead matter constantly being churned through (by earthworms, for example) and recycled.

Soil is one of the major reasons that America has become a global power. Our fields supply an incredible amount of food for the planet. By contrast, China, with its billion-plus population to feed, struggles to produce adequate amounts of nutrition due to less fertile soil. This is, in fact, one of the undiscussed underpinnings of the current “trade war.”

Damaged soil destroys not only ecosystems, but societies as well. When famers try to increase crop yield by introducing plastic mulches and irrigation, they’re unknowingly polluting the soil with tons of microplastic particles. These particles are then ingested by earthworms (among other animals), causing them to lose weight.

The research team chose the most important grass grown in temperate regions; in grassland ecosystems ryegrass is abundant. A variety of ecosystems were used, some with added microplastics, one control without. Earthworms were most affected by HDPE microplastics, though any of the added particles made life worse for the worms. 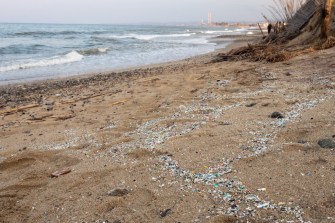 A view of the Schiavonea beach with microplastics, transported by the Ionian sea during the last sea storm.

Soil is generally low in nutrient value, meaning that worms have to eat and pass a lot of it for their existence. The team compares the results to aquatic environments, in which the digestive tracts of fish, like worms, are obstructed and worn away. The consumption of microplastic particles stunts their growth while compromising the survival of the organism.

Beyond worms, the particles (especially HDPE) decrease soil pH. This directly affects the diversity of organisms living there. As with the human microbiome, in which a diverse population of bacteria is healthiest, soil pays a steep price when diversity drops.

These particles don’t remain in the soil; they end up, in some cases, on your plate. The team writes,

“In agricultural settings, such effects may have implications for the production and quality of crop plants, by directly affecting plant development and altering the soil environment in which they are produced as well as having potential implications for human health through the accumulation of microplastics and harmful compounds in the tissues of plants.”

All plastics are biodegradable. The problem is, some take weeks to mineralize while others hang around for millions of years. Until we implement broad solutions that implement a shelf life for plastics, these particles aren’t going anywhere—except inside of our digestive tracts, eventually. As with worms, such news doesn’t look good for the health of our species.

Tags
Agricultureenvironmentfarmingplasticplastic wastepollution
In this article
Agricultureenvironmentfarmingplasticplastic wastepollution
Related
The Present
The “maritime Indiana Jones” who salvages shipwrecks now wants to tow icebergs
Simple physics makes hauling vast ice chunks thousands of miles fiendishly difficult — but not impossible.
Life
Strange life forms create an “alien” ecosystem in an abandoned uranium mine
Slimy biofilms made up of bacterial and eukaryotic life forms have taken over an abandoned, flooded uranium mine in Germany.
The Present
Climate change is altering the chemistry of wine
Smoke taint from wildfires is gross, even to wine amateurs.
Life
Our antidepressant drugs are affecting animals and ecosystems
A toxicologist explains the impacts of antidepressants on fish — and no, they’re not getting any happier.
Hard Science
200 years of exploring Antarctica
What we’ve learning from the world’s coldest, most forbidding, and most peaceful continent.
Up Next
Starts With A Bang
Physics, Not Genetics, Explains Why Flamingos Stand On One Leg
There’s an enormous evolutionary advantage for flamingos to stand on one leg, but only physics explains why.Of all the natural marvels unique to planet Earth, the diversity of the living macroscopic […]