What if the very act of picking up a penny is more financially valuable than the one cent gained? In other words, is the value of a penny so minimal while the direct value of our time so great that it makes more sense to leave the penny alone?

For many of today’s freelancers and members of the gig economy, the answer is YES–spending a few seconds to pick up a penny would be a financially unwise decision. More potential pennies would fall out of one’s proverbial pocket than be placed in one’s actual pocket. The penny is so nominal in value that just a few seconds of time commitment spent picking one up would be financially unsound.

Let’s break it down: 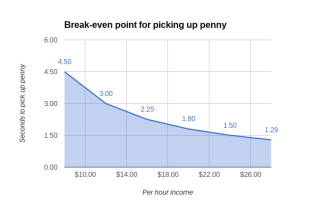 Picking up a penny every second for an entire hour would give you a grand total of $36.

So for a freelancer or anyone else able to command over $12/hour with their “free time,” three seconds used to bend down and pick up a penny is a losing proposition. A freelancer making the current minimum wage ($7.25) would find their time better spent leaving the change on the ground if the act would take five or more seconds.

This isn’t just an idle thought.

According to a recent study the McKinsey Global Institute, almost a third of American workers now participate in the gig economy. Whether it is done on a full-time basis or more an act of supplementing income, the rise of the gig economy makes the value of “spare time” highly relevant. For many participants in the gig economy, retrieving a penny would be negligible at best and negative at worst.

We have a problem, of course.  The dilemma is created by a rise in the direct value of our time within the gig economy, combined with the continuing devaluation of the penny. Applying any free time to generate money is becoming more achievable through on-demand platforms and freelancing sites, while the relative value of the penny decreases with inflation. The average Uber driver, for example, was making $19/hour in the top 20 US markets according to a 2015 study. For that average Uber driver, two seconds picking up a penny outside of their car would be less valuable than two more seconds driving.

Why pick up a penny when you can pick up your phone? The ease of generating income in the gig economy may be making orphan pennies a mere nuisance. 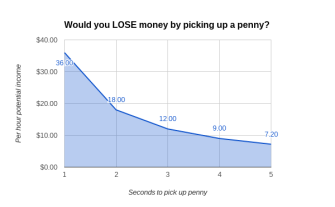 Are you losing money by picking up money? Use your average per hour income as a freelancer, along with the time used to pick up a penny, to find out! Being in the blue is a gain, while being in the white is a negative.

Perhaps the penny is destined to stay on the ground and in circulation. The one-cent has been a part of our currency through private mints since the late 18th century, and made legal tender with the Coinage Act of 1864. The US half-penny was eliminated in 1857. Despite some passionate advocacy for the United States to eliminate the one-cent piece, the penny shows little sign of death. But whether the lowest denomination of currency has been reduced to wasting our time is another story.

There are some who find picking up a penny good luck. Others insist that the one-cent pieces add up, and can send you over some great stories like the Louisiana man who collected pennies for 40 years and cashed them in last year for $5,000. But for those in the gig economy making a decent wage, that may be penny wise and pound foolish.

Persistent as the penny is, there’s no doubt its days are numbered – like all our bills and coins. To find out about where money is headed, we talked to Kabir Sehgal.

Our brains did not evolve to shop on Amazon.
Neuropsych

Money can buy happiness — if you spend it on others, research suggests.
Your Brain on Money

Science confirms what you already knew about being helpful to others.
▸
5 min
—
with
Big Think
Your Brain on Money

Humans are wired for short-term thinking according to neuroscience, making it difficult to save for retirement.
▸
6 min
—
with
Big Think
Up Next
Surprising Science

Brain blood flow in those with cannabis use disorder was found to be significantly restricted.