It’s January 1322 and William, the son of Henry the Goldsmith at Rowe, is peeing in the public urinal in Cheapside. The man next to him complains that William is spraying on his shoes. William doesn’t like the sound of that: he punches the fellow, knocking his poleaxe to the ground. At this point, a bystander named Philip intervenes — further inflaming William’s temper. William picks up the poleaxe and delivers a fatal blow to Philip’s head. The other man gets away with just his footwear soiled.

Manuel Eisner, a professor of comparative and developmental criminology at the University of Cambridge, studies the history of interpersonal violence. The aforementioned darkly comic tale is his favorite among the 142 medieval murders his team at the Violence Research Centre have pinned on a map of London.

The Violence Research Centre, part of Cambridge’s Institute of Criminology, mapped all homicides from London coroner’s records covering the period from 1300 to 1340. They extracted information on victims and perpetrators, weapons used, and — as exactly as possible — the scenes of the crime.

Each of the homicides is plotted on a map of medieval London, marked by a clickable pin that reveals all the information on each case. 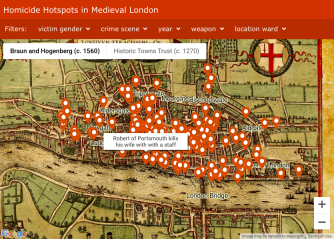 The result is a theatre of horror, seen through the prism of a primitive police procedural: two boatmen beating a saddler to death with their oars, an innkeeper murdered after winning at backgammon, and an angry shopkeeper who smashes the head of a night-time troublemaker — among many other grisly tales.

The distribution of the pins reveals a few homicide hot spots in medieval London: if you valued your life, you stayed away from Westcheap (modern-day Cheapside) and Leadenhall Market, for instance. Here’s what else the map teaches us about violent deaths in early 14th-century London:

Each of the 142 Coroner’s inquests upon which this map was based, was drawn up in the presence of a jury composed of free men from the ward where the body was found, plus three neighboring wards — medieval London counted 24 in all. A jury could number anywhere between 12 and 50 members.

When you explore the London Medieval Murder Map yourself, you’ll find that you can choose between two maps. Why? Because it’s not easy to find a map that corresponds exactly to the time frame of these murders.

You can also zoom in and out and apply a number of filters to the map, selecting pins based on gender of the victim, nature of the crime scene (public or private), year, type of weapon and ward, i.e. location.

Almost 700 years old, these medieval murders read as very remote tragedies. But there are some similarities with our own age, Eisner remarks: both then and now, homicides often start with trivial altercations, usually occur on non-working days, and mostly take place in the evening.

The Interactive London Medieval Murder Map can be found here at the Cambridge Institute of Criminology’s Violence Research Centre. Many thanks to Catherine Stokes for sending this in.

A new study suggests that hunting dogs' barks convey emotional information about the animals they see.
Up Next
Health