In 2017, Saint Louis police officer Jason Stockley was found not guilty of the first-degree murder of Anthony Lamar Smith. The verdict was controversial as there was DNA evidence that Stockley had planted a handgun in Smith’s car, ostensibly as justification for the shooting. So, on September 15, 2017, the citizens of St. Louis held a series of protests.

A few days later, 1,000 people protested outside of downtown St. Louis’s police headquarters. To control the crowd, police formed a cordon around certain protestors, restricting their movement. This was the controversial “kettle,” a police tactic designed to either hold protesters until they calm down (in theory) or to direct their movement through a single exit point.

In this particular kettle, however, it was clear that the tactic served as an excuse to beat the protesters caught within it. Although about ten journalists caught in the kettle attested to this fact, the news only came to the fore once it was revealed that three officers had beaten and wrongfully arrested an undercover police officer. In the ensuing investigation, it became clear that the officers had exchanged texts prior to the protests, such as “let’s whoop some ass,” and — with a complete lack of self-awareness — “It’s gonna be a lot of fun beating the hell out of these shitheads once the sun goes down and nobody can tell us apart!!!” These officers were eventually indicted for their actions. 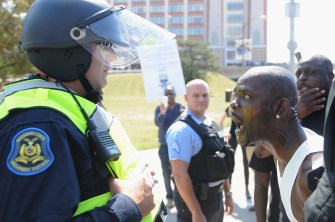 A man yells at a law enforcement officer during a protest action following a not guilty verdict of former St. Louis police officer Jason Stockley, who was charged with first-degree murder last year in the shooting death of Anthony Lamar Smith in 2011.Michael B. Thomas/Getty Images

This is just one example of kettling, and it obviously paints a certain picture of the practice. But there’s good reason why the tactic has come under fire: Incidents like the one described above have happened before, and no matter what, everybody in the area gets caught up in the kettle, whether they’re peaceful protesters, rioters, journalists, or uninvolved citizens. On the other hand, advocates argue that the tactic is one of the few relatively safe and peaceful ones available to police when a protest gets out of control. Despite the need for such a method, it’s clear that kettling is ripe for abuse.

For example, during the 2009 G20 protests in London, police formed a kettle around a group of protesters by the Bank of England. The kettle lasted for seven hours, forcing some protesters to relieve themselves on the street without access to toilets. When the kettle was opened to release some of the “pressure,” protesters had their photographs taken and were asked for their names and addresses. Although the law did not require them to supply this information, those who refused were pushed back to the kettle. And since kettles are by their very nature indiscriminate, there would be no guarantee that the individuals who were forced to supply this information would have done anything wrong.

During the 2003 Iraq War protests in Chicago, police kettled more than 800 protesters, arresting them without giving them a notice to disperse — which would have been quite pointless since they were trapped in the kettle anyhow. Courts ruled that the mass arrest was conducted without probable cause, and the city of Chicago was later forced to pay a $6.2 million settlement to the protesters.

Despite these and other examples of kettling’s risk and potential for abuse, the practice remains a legal one. In 2012, the practice was challenged in court as a violation of article 5 of the European Convention on Human Rights, which states that everybody has the right to liberty and security of person. Three individuals who had been part of a kettle during anti-globalization protests and riots held in London in 2001 argued that the kettle had “deprived [them] of their liberty.” However, the European Court of Human Rights ruled that the tactic was lawful, setting precedent and providing tacit approval for police to continue to form kettles around protesters.

While the fact that it is indiscriminate and denies people food, water, and access to toilets for hours is problematic enough, kettling also provides more opportunities for bad actors amongst the police to abuse others and get away with it. The Saint Louis police officers serve as a testament to that fact. Without it, however, how are police to contain and control bad actors amongst protesters and demonstrators? The vast majority of protesters don’t want their movements to be associated with violence and rioting — how then can police deal with violent rioters without kettling at their disposal? The answer is unclear, but it is clear that so long as the practice remains in police officers’ toolkits, we will continue to see headlines blaming police-protestor violence on kettling.

Tags
activismcriminal justiceprotestspublic spacessocial change
In this article
activismcriminal justiceprotestspublic spacessocial change
Related
The Past
In the Soviet Union, murderers had an easier time than political dissenters
Soviet researchers studied crime through a Marxist-Leninist lens. Under Lenin, a humanitarian approach to criminality briefly emerged, but dissipated when Stalin rose to power.
Neuropsych
Beauty bias: hopefully the judge finds you attractive
Justice is not blind to beauty.
The Present
Study: You would spend 90 extra days in jail in a private prison
A new study suggests that private prisons hold prisoners for a longer period of time, wasting the cost savings that private prisons are supposed to provide over public ones.
The Present
America’s prison catastrophe: Can we undo it?
The US prison system continues to fail, so why does it still exist?
▸
18 min
—
with
Big Think
The Present
Despite social pressure, boys and girls still prefer gender-typical toys
Fifty years of research on children’s toy preferences shows that kids generally prefer toys oriented toward their own gender.
Up Next
Life
How Asian elephants judge quantities by smell
Their noses can count?