On February 19, 1942, President Roosevelt issued Executive Order 9066, which authorized and directed military commanders “to prescribe military areas … from which any or all persons may be excluded, and with respect to which, the right of any person to enter, remain in, or leave shall be subject to whatever restrictions the Secretary of War or the appropriate Military Commander may impose in his discretion.” Under the authority of this executive order, roughly 112,000 men, women, and children of Japanese descent — nearly two-thirds of which were American citizens — were detained in concentration camps.

How did the camps get their start?

With the benefit of a nearly 80-year perspective, it’s clear that the internment of Japanese Americans was racially motivated. In response to Japan’s growing military power in the buildup to World War II, President Roosevelt commissioned two reports to determine whether it would be necessary to intern Japanese Americans should conflict break out between Japan and the U.S. Neither’s conclusions supported the plan, with one even going so far as to “certify a remarkable, even extraordinary degree of loyalty among this generally suspect ethnic group.” But of course, the Pearl Harbor attacks proved to be far more persuasive than these reports.

Pearl Harbor turned simmering resentment against the Japanese to a full boil, putting pressure on the Roosevelt administration to intern Japanese Americans. Lieutenant General John DeWitt, who would become the administrator of the internment program, testified to Congress

“I don’t want any of them here. They are a dangerous element. There is no way to determine their loyalty… It makes no difference whether he is an American citizen, he is still a Japanese. American citizenship does not necessarily determine loyalty… But we must worry about the Japanese all the time until he is wiped off the map.”

DeWitt’s position was backed up by a number of pre-existing anti-immigrant groups based out of the West Coast, such as the Joint Immigration Committee and the Native Sons and Daughters of the Golden West. For many, the war simply served as an excuse to get rid of Japanese Americans. In an interview with the Saturday Evening Post, Austin Anson, the managing secretary of the Salinas Vegetable Grower-Shipper Administration, said:

“We’re charged with wanting to get rid of the Japs for selfish reasons. We do. It’s a question of whether the White man lives on the Pacific Coast or the brown men. … If all the Japs were removed tomorrow, we’d never miss them in two weeks because the White farmers can take over and produce everything the Jap grows. And we do not want them back when the war ends, either.”

Ironically for Anson, the mass deportation of Japanese Americans under Executive Order 9066 meant there was a significant shortage of agricultural labor. Many Caucasians left to fight the war, so the U.S. signed an agreement with Mexico to permit the immigration of several million Mexicans agricultural workers under the so-called bracero program. 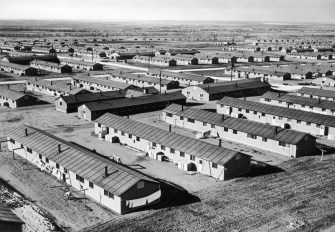 Circa 1943: Aerial view of a Japanese American relocation center in Amache, Colorado, during World War II. Each family was provided with a space 20 by 25 ft. The barracks were set in blocks and each block was provided with a community bath house and mess hall.

Life in the camps

For the most part, Japanese Americans remained stoic in the face of their incarceration. The phrase shikata ga nai was frequently invoked — the phrase roughly translates to “it cannot be helped,” which, for many, represents the perceived attitude of the Japanese people to withstand suffering that’s out of their control.

Initially, most Japanese Americans were sent to temporary assembly centers, typically located at fairgrounds or racetracks. These were hastily constructed barracks, where prisoners were often packed into tight quarters and made to use toilets that were little more than pits in the ground. From here, they were relocated to more permanent camps — replete with barbed wire and armed guards — in remote, isolated places across the seven states of California, Arizona, Colorado, Wyoming, Idaho, Utah, and Arkansas.

Many of these camps, also known as War Relocation Centers, were little better than the temporary assembly centers. One report described the buildings as “tar paper-covered barracks of simple frame construction without plumbing or cooking facilities of any kind.” Again, overcrowding was common.

As a result, disease became a major concern, including dysentery, malaria, and tuberculosis. This was problematic due to the chronic shortage of medical professionals and supplies, an issue that was not helped by the War Relocation Authority’s decision to cap Japanese American medical professional’s pay at $20 a month (about $315 in 2019 dollars), while Caucasian workers had no such restriction. As a comparison, Caucasian nurses earned $150 ($2,361) a month in one camp.

The U.S. government also administered loyalty questionnaires to incarcerated Japanese Americans with the ultimate goal of seeing whether they could be used as soldiers and to segregate “loyal” citizens from “disloyal” ones. The questionnaires often asked whether they would be willing to join the military and if they would completely renounce their loyalty to Japan. Due to fears of being drafted, general confusion, and justified anger at the U.S. government, thousands of Japanese Americans “failed” the loyalty questionnaire and were sent to the concentration camp at Tule Lake. When Roosevelt later signed a bill that would permit Japanese Americans to renounce their citizenship, 98 percent of the 5,589 who did were located at Tule Lake. Some apologists cite this an example of genuine disloyalty towards the U.S., but this argument clearly ignores the gross violation of Japanese Americans’ rights. Later, it became clear that many of these renunciations had been made under duress, and nearly all of those who had renounced their citizenship sought to gain it back.

Since many children lived in the camps, they came equipped with schools. Of course, these schools weren’t ideal — student-teacher ratios reached as high as 48:1, and supplies were limited. The irony of learning about American history and ideals was not lost on the students, one of whom wrote in an essay —

“They, the first generation [of Japanese immigrants], without the least knowledge of the English language nor the new surroundings, came to this land with the American pioneering spirit of resettling. …Though undergoing many hardships, they did reach their goal only to be resettled by the order of evacuation under the emergency for our protection and public security.”

Potentially the best part of life in the camps — and the best way for determined prisoners to demonstrate their fundamental American-ness — was playing baseball. One camp even featured nearly 100 baseball teams. Former prisoner Herb Kurima recalled the importance of baseball in their lives in an interview with Christian Science Monitor. “I wanted our fathers, who worked so hard, to have a chance to see a ball game,” he said. “Over half the camp used to come out to watch. It was the only enjoyment in the camps.”

When the camps finally closed in 1945, the lives of the incarcerated Japanese Americans had been totally upended. Some were repatriated to Japan, while others settled in whichever part of the country they had been arbitrarily placed in. Those who wished to return to the West Coast were given $25 and a train ticket, but few had anything to return to. Many had sold their property to predatory buyers prior to being incarcerated, while theft had wiped out whatever else they had left behind. Many, many years later, the 1988 Civil Liberties Act mandated that each surviving victim be paid $20,000, though that seems like a small fine to pay for irrevocably changing the courses of more than 100,000 lives.

Mahāyāna is the most popular type of Buddhism in the world today.
13.8

The word “turkey” can refer to everything from the bird itself to a populous Eurasian country to movie flops.
Up Next
The Present

Zizek is on the left and dislikes political correctness. How does that work out?