Delhi is home to some incredible sights; the Lotus Temple, the Lodi Gardens, India Gate, and a slew of temples and tombs. Delhi has also acquired another eye-catching structure, although it’s probably one the city would rather not have. The locals call it “Mount Everest” — a mountain of trash that stands 213 feet tall, or 65 meters, located in the eastern area of Ghazipur. And this trash mountain is growing.

Municipal officials claim that between 2,000 and 2,500 tons of waste are dumped every day. That works out to be roughly 33 feet (10 meters) a year. At this rate, the Ghazipur landfill is slated to grow taller than the Taj Mahal by 2020. 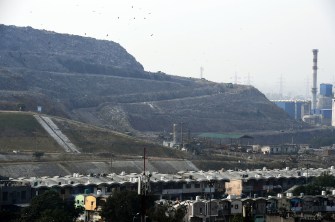 This image shows how closely residential buildings are placed next to the gigantic mountain of trash. Photo credit: PRAKASH SINGH / AFP / Getty Images

The hazards of the Ghazipur landfill

The site was originally designed to reach a maximum height of 67 feet (20 meters), but once this limit was met in 2002, the city continued to rely on the dump for waste disposal, and this has had some disastrous consequences. On September 1, 2017, one of the dump’s slopes failed, sending an avalanche of waste into roads and adjacent canal. “It was a flood of trash,” said Vishal Kumar, a local who was caught up in the landslide. “I saw heaps of garbage coming down the hill like a flood and suddenly, we were swept into the canal. For a moment, everything went dark,” he said in an interview with Al Jazeera. Kumar emerged relatively unharmed. However, two others, including Kumar’s cousin, were killed in the landslide.

Landslides aren’t the only threat that this mountain of trash poses. All landfills produce a substance called leachate, which is produced when rain passes through the waste, absorbing toxic chemicals. For this reason, most landfills include impermeable liners beneath them to collect the leachate. This is not the case at the Ghazipur landfill, where the leachate flows freely into the ground and nearby canal.

As microorganisms digest the material within landfills, they produce what’s known as landfill gas, which is mostly composed of methane and carbon dioxide. The waste at the Ghazipur landfill is particularly prone to producing landfill gas since it is uncompacted and exposed. The combination of loose material and methane means that Ghazipur regularly catches fire, taking days to extinguish.

As one can imagine, the pollution coming from this dump is a major health risk, too. Locals claim that people fall sick more frequently in the area, and the smell makes daily living unbearable. A local doctor said that they see about 70 people per day, most of whom suffer from respiratory and stomach issues caused by the pollution. 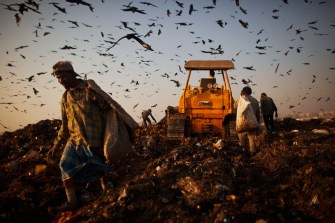 Making a stink about landfills

Fortunately, some measures are being taken to deal with the Ghazipur landfill. Members of Aam Aadmi, Delhi’s ruling party, responded to a petition demanding that the landfill be cleared up. As a result, the landfill is no longer being used to collect waste, though no actions have been taken to clear the area, either. Instead, Aam Aadmi has pledged to clear the dump within two years by using the waste material in a productive way, such as in road construction.

Even if the dump isn’t cleared, there are steps that can be taken to improve it. A report written after the September landslide concluded that the dump could be made safer by giving it a gentler grade to reduce the risk of landslides, compacting the waste, and using suppressants rather than water to put out fires, as water can weaken the dump’s slopes. Ultimately, however, the only solution to the Ghazipur dump is identify a new dump site. This has proven to be challenging; the East Delhi Municipal Corporation has proposed setting up two new dump sites on an active floodplain right next to the Yamuna river, sparking significant resistance by locals.

Urban areas of India generate 62 million tons of solid waste per year, and this number is expected to reach 165 million by 2030. Narendra Modi, the prime minister of India, has vowed to abolish all single-use plastics by 2022, which, if achieved, will be a significant step in the right direction. Hopefully, by implementing more effective waste management policies, such as recycling, composting, and developing biomethanation plants to generate electricity, India can avoid building more Ghazipur landfills in the future.

Psychologist Daniel Goleman shares what he learned by studying the brain waves of Olympic-level meditators, and his findings are unprecedented.
▸
4 min
—
with
Daniel Goleman
Up Next
Life

Are we witnessing evolution in real time?