While the movie Idiocracy isn’t a great one, its concept is genius: A man of average intelligence goes to sleep for 200 years and awakens to find himself (by far) the smartest person on earth. This is largely due to how quickly, carelessly, and prolifically stupid people reproduce, and how much more strategically — and thus less often — smart ones do.

Certainly, to many of us, it feels like the world is getting dumber.

Just-published research from deCODE, a genetics firm in Reykjavik, Iceland, suggests that Idiocracy might have had it about right. Thankfully, though, the dumbening won’t be happening so precipitously, with a drop in the average IQ of only about 0.04 points per decade. The concern is about what this could mean over time.

The deCODE team’s conclusion is based on a database of about 100,000 Icelandic people covering a 65-year period. The researchers were looking for changes in the prevalence of gene variants that correspond to a desire for educational attainment. They did find a slight decline in their occurrence during that time range.

Still, it’s important to see the finding in context. Study leader Kari Stefansson notes that improvements in education could overwhelm and obliterate the apparent subtle genetic effect — after all, IQ levels rose between 1932 and 1978 by nearly 14 points.

There’s also some evidence to the contrary. A 2014 study found that while educated American women have a lower fertility rate (2.09 children) than women without a high-school diploma (2.24 children), those with advanced degrees have more kids (1.96) than those with undergraduate (1.88) degrees. Oddly, the lowest reproductive rate occurs among women with some college education but no degree (1.78 children). 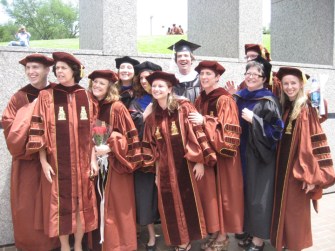 It’s not entirely clear that genes are the driving factor in what makes educated people reproduce less. While a study by Melinda Mills of Oxford has found that while genes may affect when a woman has a child, she says it’s probably not that large a factor in deciding if: “The education we have, when we have children and how many, is largely socially and environmentally determined. It overrides the genetic effect.”

In Idiocracy’s portrayal of dumbness gone wild, it’s culture that seems to be the culprit, and most experts agree. The new study also presents a danger, according to Ewan Birney, director of the European Bioinformatics Institute in Cambridge, that some will misunderstand its conclusion as meaning that genes determine an individual’s capacity for learning. “This is not right, and I cannot emphasize this enough,” Birney told The Guardian.

Ultimately, the results of deCODE’s research are more interesting than dispositive, an example of the intriguing trends that can be hiding in large genetic databases. We’ll be seeing more and more of these sorts of analyses as the records of more and more people are aggregated in the future.

Tags
deCODEeducationfertility rategene poolgenesicelandidiocracyintelligenceIQ stupiditynatural selection
In this article
deCODEeducationfertility rategene poolgenesicelandidiocracyintelligenceIQ stupiditynatural selection
Related
The Future
How the metaverse will revolutionize K-12 and higher education
Imagine going on a tour through the human circulatory system as a tiny cell. That is just one example of education in the metaverse.
The Learning Curve
The art of asking the right questions
The right questions are those sparked from the joy of discovery.
Thinking
How the liberal arts can save higher education
Computerized, job-focused learning undercuts the true value of higher education. Liberal arts should be our model for the future.
Thinking
Boys are graded more harshly than girls. Why?
Education has a global bias against boys.
Neuropsych
Circadian rhythms: What time is your brain at its cognitive peak?
For college students, it’s the early afternoon.
Up Next
Culture & Religion
The Mirror of Our Better Selves – Bernard-Henri Lévy – Think Again Podcast #82
Spontaneous talk on surprise topics. French philosopher and filmmaker “BHL” on evil, complacency, and the necessity of outsider thinking.