It’s not groundbreaking to propose that war, unfortunately, means business. While it was devastating, World War 2 also reduced the unemployment rate in the United States, still recovering from the Great Depression, from 25% to 10% almost immediately. People were put to work making weapons and supplies for the war effort, and the phenomenal economic boom of the postwar economy brought prosperity back to the country.

But how much business is war now for the United States? The country and the world at large have been experiencing a rather long period of relative peace, with armed conflicts more regional than global in nature. While the overall transfer of major weapons has not hit the highs of the 1980s, it has overall been growing in the past two decades. According to the Stockholm International Peace Research Institute (SIPRI), the size of the global arms market is at about $100 billion. And it’s dominated by the United States.

“Quite frankly,” says Danny Sjursen, US Army strategist and historian, “the war—selling arms—is one of the last American industries that’s left. It’s one of the last things the United States does well, that we’re still number one at—number one at dealing arms in the world.” 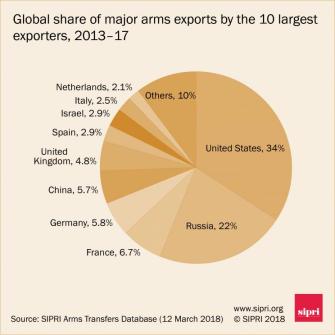 Writing in The American Conservative, William D. Hartung notes that “the U.S. share has fluctuated between one-third and one-half of the global market for the past two decades, peaking at an almost monopolistic 70 percent of all weapons sold in 2011.” Hartung also points out that “arms deals are a way of life in Washington” and that significant part of the government, starting with the president, “are intent on ensuring that American arms will flood the global market.”

If you’re wondering, most of the sales go to what are called “developing nations,” which is a pretty broad category that includes all countries except the United States, Russia, European nations, Canada, Japan, Australia, and New Zealand. According to the SIPRI report, America supplied arms to 98 countries, with most of them (49%) going to the Middle East.

Here’s where the largest arms sales by the U.S. go: 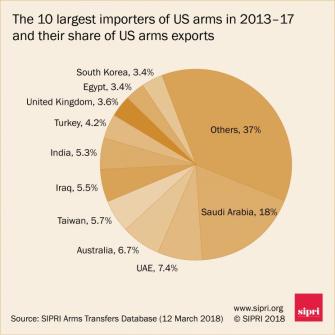 With all the arms it’s outputting into the world, there have been some alarming recent examples where America’s weapons ended up in the wrong hands. As the U.S. combated the spread of ISIS since 2014, it has increasingly found itself fighting against its own weapons, reported Task and Purpose.

How did that happen? Lack of oversight of foreign-made weapons by the U.S. and its allies ended up causing a great influx of arms and ammo into Iraq and Syria. Once the weapons were in that region, “distributed like candy to battlefield partners,” as writes Jared Keller, they often found their way into the hands of ISIS.

A 2015 Amnesty report showed that the majority of ISIS’s weapons arsenal “comes from stockpiles captured from the U.S.-allied Iraqi military and Syrian rebels.”

“International weapon supplies to factions in the Syrian conflict have significantly augmented the quantity and quality of weapons available to IS forces—in numbers far beyond those that would have been available to the group through battlefield capture alone,” stated the report. “These findings are a stark reminder of the contradictions inherent in supplying weapons into armed conflicts in which multiple competing and overlapping non-state armed groups operate.” 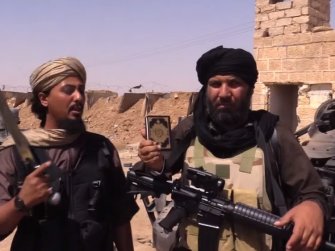 Where do we go from here in the arms trade? American arms exports are growing, expanding by 25% in 2013-17 compared to the previous four years, according to the SIPRI study. Russia’s exports, on the other hand, fell by 7.1% over the same period. President Trump has made selling more weapons to allies a priority that he reiterates in calls to international leaders. It’s hard to imagine this industry contracting right now but it’s possible to call for much stricter oversight of where the arms are going and a broader discussion of how America makes its money. You know what happens when you live by the sword.

Carl Jung was one such person.
Up Next
Surprising Science

Heads up! Mars makes its closest, brightest approach in 15 years.

No, it won’t be as big as the moon, as some have claimed. Still, it will be a nice show for the next month or so.