In the climactic scene of Woody Allen’s clever and self-consciously juvenile film Everything You Wanted to Know About Sex* But Were Afraid to Ask, Allen’s character is a sperm cell who is waiting for his big moment. Allen’s character is not happy with his assigned fate. Nor does he get to decide when his moment will come. That is left to the operators in the “brain room,” a bustling control center that resembles a space station.

At one point, a brain operator issues a desperate order: “Have memory think of baseball players to keep sperm from premature launching.” The memory operator then begins to calmly transmit these words into a phone: “Willie Mays. Joe Namath. Mickey Mantle.” 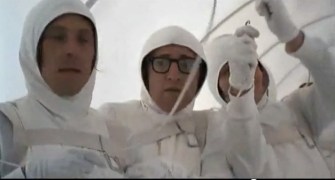 This scene, which is titled “What happens during ejaculation?” is of course a farcical take on reproductive biology, but it is also an appropriate illustration of the leading role the brain plays in the whole affair. Humans have cognitive abilities that enable us to conjure fantasies — in this case to distract the man, but more often to arouse him.

Jesse Bering, the author of the 2012 book Why is the Penis Shaped Like That? describes the ability to create fantasy scenes in our heads as “an evolutionary magic trick.” He writes:

“It requires a cognitive capacity called mental representation (an internal “re-presentation” of a previously experienced image or some other sensory input) that many evolutionary theorists believe is a relatively recent hominid innovation. When it comes to sex, we put this capacity to very good — or at least frequent — use.”

“I really don’t think there’s anything too outrageous in terms of what you can concoct in your head,” Bering says, “for the purposes of masturbation at least.” But what about actual pornography–by that I mean the kind of videos that are being created every 39 minutes in the U.S. and are being watched by 28,258 Internet users every second? Is it killing our sexual fantasy lives? After all, it’s not just the volume, it’s the content itself. Bering points out in his book that we can easily access “an online smorgasbord of real people doing things our grandparents couldn’t have dreamed up even in their wettest of dreams…”

What’s Next from Jesse Bering? An Invitation to Impropriety on Big Think

In his book’s opening chapter, entitled “An Invitation to Impropriety,” Bering offers full disclosure: “my perspective is that of a godless, gay, psychological scientist with a penchant for far-flung evolutionary theories.” Bering, who Paul Bloom has called “the Hunter S. Thompson of science writing,” says he was born with a salacious mind and has come to train his fearless curiosity on a world “in which nothing [is] sacred, no question too absurd or off-limits…”

To give you an idea of the range of subjects he covers, when I took Why is the Penis Shaped Like That? to the beach I was asked by a friend what I was reading about. “Oh, not much,” I replied. “Just a little bestiality, cannibalism and some sexsomnia.”

These subjects, as Bering admits, are by their very definition sensational, but they can also teach us the most about ourselves. Bering writes:

Related
Thinking
“Give a f***, actually”: The surprising benefits of being grateful for things you dislike
Radical Emotional Acceptance calls on you to celebrate all of life’s emotions — even the negative ones.
Thinking
Visual thinking: How to understand the inner lives of animals
Humans are good visual thinkers, too, but we tend to privilege verbal thinking.
Strange Maps
The world’s longest straight line connects Portugal to China
It’s nearly 20,000 miles long.
The Past
How the death of alchemy gave birth to modern science
Far from practicing witchcraft, the experimentation of medieval alchemists helped bring about the Scientific Revolution.
The Well
This is what the fourth dimension looks like
Left–Right, Back–Forth, Up–Down. What’s the fourth dimension?
▸
3 min
—
with
Brian Greene
Up Next
Technology & Innovation
How Mobile Phones Will Pioneer Future Space Technology
Today’s mobile phones are yesterday’s supercomputers, which make them powerful enough to suit the needs of aerospace engineers, who want to create a future of micro-satellites.