“My Administration is working to provide all families with the tools and information they need to accumulate wealth and overcome barriers to homeownership,” then-President Bush wrote. In hindsight, they’re words best read with historic side-eye given how the excesses of the home-lending industry brought on the U.S. subprime mortgage crisis.

Recovery has been long and slow, and some communities are still clawing their way out. But since 2015, Hispanics have seen historic gains in homeownership, gains that have helped prop up a still shaky market. 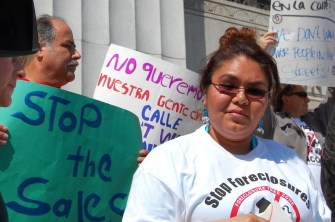 Hispanic and Latinx protesters rally against home foreclosures during the Great Recession. Millions of homes were foreclosed upon each year, and minority groups were hit especially hard. Photo credit: Jacob Ruff / Flickr

Hispanic homeownership on the rise

Citing U.S. Census Bureau data, the Wall Street Journal reported that the rate of homeownership among Hispanics* has increased more than any other ethnic group. The rate has risen 3.3 percent since 2015, a bounce back from a 50-year low in 2015, and last year marked the largest homeownership gains for Hispanics since 2005.

While Hispanics make up roughly 18 percent of the U.S. population, they accounted for 62.7 percent of net homeownership gains, as noted by a National Association of Hispanic Real Estate Professionals’ (NAHREP) 2018 report. They are also the only ethnic group to raise their rates of homeownership for the fourth consecutive year, and should this rate of increase continue, they will account for 56 percent of all new homeowners by 2030.

The result is a boost “that could help buoy the market for years,” an incredible comeback when you consider how devastating the Great Recession proved to minority groups.

“The housing market would look very different today if it weren’t for a tidal wave of Latino home buyers,” Gary Acosta, co-founder and chief executive of the National Association of Hispanic Real Estate Professionals, told the Journal.

Recent years have seen Hispanics make other social and economic gains, as well. They are responsible for 81 percent of the U.S. labor force growth over the last decade, a time of economic expansion. Their median household income has seen the largest increase among all racial and ethnic demographics. And more Hispanics are earning diplomas and degrees than in the late ’90s.

What are the reasons for these gains?

A good guess would be all of the above. The Wall Street Journal article cites education, income gains, and a growing familiarly with the U.S. mortgage system as the drivers of Hispanic homeownership. Jerry Brown, CEO of the National Association of Home Builders, argues for similar reasons:

“We’ve been studying it a little bit and what we think we see is, like a lot of Caucasian America, Hispanic income has risen significantly since the recession. Also, we see an increase in education levels among Hispanics. And thirdly, for some of the newly arriving Hispanics, they are used to paying cash for big purchases — that helps them avoid the complexities of the mortgage system.”

Sadly, the windfall hasn’t been even across the demographic board. African-American homeownership has dropped to an all-time low, falling 8.6 percent since its 2004 height. Potential explanations include a difficult recovery after the housing crisis and America’s legacy of housing segregation.

Millennials are also less likely to own homes, despite many ultimately desiring to. This is thanks in part to student debt, income-devouring rents, and less median income than previous generations enjoyed at the same age.

Why the U.S. is an anomaly among democracies

Another reason for these historic gains is ongoing demographic change. In short, America is, and will continue to become, more diverse than it was in previous generations. As we mentioned, Hispanics make up 18 percent of the U.S. population but half of U.S. population growth over the last decade.

Dudley Poston, professor of sociology at Texas A&M University, and Rogelio Sáenz, professor of demography at the University of Texas at San Antonio, crunched the numbers and found that an “aging white population, alongside a more youthful minority population, especially in the case of Latinos, will result in the U.S. becoming a majority-minority country in around 2044.”

With America’s demographics shifting over the next decades, no doubt people who identify as Hispanic will continue making these historic strides.

* We’re use “Hispanic” over Latino, Latina, or Latinx as it is the term used in NAHREP’s 2018 State of Hispanic Home Ownership Report, a major source of data for this article.

Bitcoin is often derided as volatile, but a new report suggests there is a method to the madness.
Up Next
Neuropsych

Most diseases don’t differ depending on where you’re from. Schizophrenia, however, is heavily dependent on your culture.