Slavery didn’t simply end when Abraham Lincoln signed the Emancipation Proclamation in 1863. It took nearly three years for the ratification of the 13th Amendment to abolish slavery in the United States. Slave owners in Kentucky and Delaware begrudgingly unshackled the men and women they believed to be their property.

Public sentiment steadily grew in favor of abolition, but it was in no way a done deal. Lincoln himself wasn’t an abolitionist when our nation entered the Civil War. The president wasn’t thinking about the freedom of slaves in 1861; his goal was to preserve the union. As he wrote in a letter in 1862,

The “Great Emancipator” pivoted as the war continued. The first attempt to abolish slavery passed in the Senate but failed to garner a two-thirds majority in the House. Abolition was a fight to the end. For most of that time, the majority of Americans were not in favor of ending this run of free and enforced labor.

Ditto Civil Rights. The Civil Rights Act of 1964 was hardly a consensus opinion. Twenty-seven senators voted against it; 126 House members gave a thumbs down. Three months after passage, a majority of Americans (58 percent) supported the law, but nearly a third (31 percent) disapproved, while 10 percent of Americans didn’t know how they felt on the matter. Even then, 68 percent supported “moderate enforcement” compared to the 19 percent that wanted “vigorous enforcement.”

Translation: ease into that “every man is equal” idea. We just can’t move too fast on this freedom issue.

Unfortunately for the slow turning of our moral compass, technology moves fast — much faster than our brains are designed to handle. Rather than keeping up, the easiest choice is to fall back into comfortable habits, even if such habits are dangerous. Enter Facebook.

Last week, the advertising giant that masquerades as a social media network banned white nationalism from its properties, including Instagram. Community standards previously allowed posts relating to race segregation, though not explicit white supremacy. Enforcement will be challenging and contentious. For now, Facebook’s platforms will redirect white nationalists to Life After Hate, a nonprofit organization founded in 2011 to aid people in leaving hate groups.

White nationalism is merely a “nicer way” of expressing white supremacy, notes Ulrick Casseus, who works on Facebook’s policy team. Normalizing genetic supremacy by claiming nationalism has helped grow these hate groups, according to a number of race experts interviewed by Facebook. How the company will carry this out on such a wide scale remains to be seen. Add to this the fact that Life After Hate lists just six employees on its site—the influx of potential subscribers will likely overwhelm the group.

After posting a related article on my social media handles last week, most offered a thumbs up or heart. Negative comments revolved around one idea: Facebook’s directive violates freedom of speech.

Such a sentiment misses the point of free speech in an important way. Language that actively suppresses voices in a society in favor of voices that mimic your own is not freedom, but an intentional attempt to create its opposite.

Roger McNamee, one of Mark Zuckerberg’s early advisors (and now one of the platform’s biggest critics), discusses this topic on Sam Harris’s latest podcast. McNamee quotes Renée DiResta, stating, “Freedom of speech is not the same as freedom of reach.” The real issue is not censorship, but reach — avoiding amplification of messages that manipulate and indoctrinate the merely curious or questioning, much the same way that cult leaders exploit recruits by appealing to base emotional sentiments. 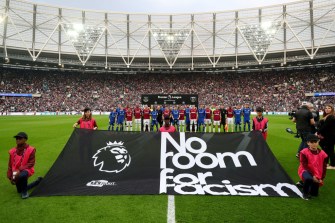 The teams pose behind a No Room for Racism sign ahead of the Premier League match between West Ham United and Everton FC at London Stadium on March 30, 2019 in London, United Kingdom.

If Facebook was merely a sounding board with no persuasion over others, that would be one thing. But we know the algorithms favor outrage. Indoctrination used to require word of mouth, in which you needed to be within earshot of the mouths indoctrinating. This is no longer the case. McNamee notes that platforms like Facebook reward users with status by elevating their beliefs in echo chambers. There are no rules in the race to the bottom of the attention economy, which is where these platforms make billions of dollars in revenue.

Similarly, in the digital environment confusion over one vaccine administration has the potential of creating an army of anti-vaxxers. The vaccination “debate” was settled nearly 240 years ago. Global population was under one billion people when Edward Jenner demonstrated the efficacy of vaccines — a census achieved through millions of years of evolution. Fast-forward just two-and-a-half centuries: we’re over 7.5 billion. The efficacy of vaccines isn’t a debate. It’s basic and observable science.

Likewise, the hoax of genetic supremacy was revealed long ago, but the disease of racial purity persists. Trying to make it a debate is like the creation “science” advocates pitting their beliefs against evolution; there is no there there. In the absence of evidence manipulation becomes necessary. White nationalism/supremacy has existed for eons; social media enabled fans an opportunity to infect others.

Offering white supremacists a platform for recruitment does nothing to move society forward. We have much bigger problems to face than groups of ideologues refusing to turn the pages of basic history or science books. Language is a responsibility. Facebook’s decision would violate freedom of speech if white nationalists displayed the maturity to recognize that fact. Facebook might be cutting off freedom of reach, which in this case is excising a tumor: not pretty, but necessary.

“This is much deeper than just ‘let’s figure out how we can get both sides to get along.’”
▸
15 min
—
with
Ian Bremmer
The Present

Moral dilemmas reveal the limitations of ethical principles. Oddly, the most principled belief system might not have any principles at all.
Up Next
Neuropsych

Unfortunately, this means that drivers act more aggressively on the road when spotting cyclists.