About 38 percent of European Jews have considered emigrating from Europe over the past five years due to a “surge” of anti-Semitism, according to a new survey.

The poll was conducted by the European Union Agency for Fundamental Rights (FRA) and includes responses from 16,395 Jewish people living in 12 European countries. On average, 9 out of 10 respondents said anti-Semitism has been on the rise over the past five years in their home countries, with respondents in France, Belgium, Germany and Poland feeling the sharpest increases. 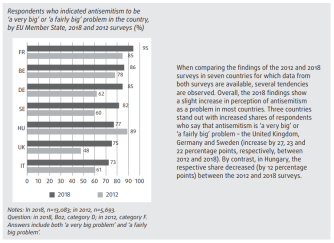 “It is impossible to put a number on how corrosive such everyday realities can be, but a shocking statistic sends a clear message … more than one-third say that they consider emigrating because they no longer feel safe as Jews,” FRA’S director Michael O’Flaherty said in a foreword to the study.

E.U. officials urged governments to do more to combat anti-Semitism as they presented the report in Brussels on Monday.

“What we need now is concrete action in the member states to see real change for Jews on the ground,” European Commission deputy head Frans Timmermans told reporters. “There is no Europe, if Jews don’t feel safe in Europe.”

European Jews in their own words

The report also includes some quotes from respondents that convey varying viewpoints on the nature and seriousness of modern anti-Semitism, highlighting the complexities of what’s often called “the world’s oldest hatred.”

“Antisemitic thoughts that slowly enter everyday ‘acceptable’ thinking is the biggest danger for me. There will always be someone who will let it go further and when it becomes too crude or hard to ignore, it’ll be too late.” (Man, 55–59 years old, Belgium)

“I believe that the fear of antisemitism is greater than the reality.” (Man, 40–44 years old, the United Kingdom)

“I feel very safe in the UK. I have been living outside of London as well but it was never a problem to be openly Jewish.” (Woman, 40–44 years old, the United Kingdom)

“Some forms of antisemitism (especially in social media) have become so commonplace that they are almost accepted. These are the sort of things that you can’t report to the police or even to the media platform, but strengthen a hostile culture. For example, references to Jewish bankers, Rothschild cults, etc etc.” (Man, 40–44 years old, the United Kingdom)

“Manifestations of antisemitism include jokes about Jews, the Holocaust, Hitler, etc., which are still strongly present in Poland in some circles, including among people with higher education. In addition, much is said about the influence of Jews on political decisions not in Poland but in the US, which is simply a way of saying that Jews rule the world because of the position of the US in international relations.” (Woman, 25–29 years old, Poland)

“I am very scared about my children’s future, since ‘Jew’ is an invective in my district, and people hate Jews so much that life means nothing. We are scared that our children will be attacked one way or another.” (Man, 45–49 years old, Denmark)

“I noticed that my Jewish people from my generation (including myself) experience a strong increase in the sensation of insecurity and not being welcome/accepted as a Jew in the Netherlands.” (Woman, 30–34 years old, the Netherlands)

Just as there are many types of believers, there’s not only one type of atheist.
Thinking

5 of the most misunderstood quotes in philosophy

That Nietzsche quote might not mean what you think it does.
Thinking

What does it mean to be a “person”? Different cultures have different answers

Ideas often taken for granted in the United States and Europe about what it means to be a person are, quite simply, not shared with other cultures.
Up Next
The Present

Secretary-General António Guterres said corruption is “an assault on the values of the United Nations.”