We are electrical creatures. Defibrillators jump-start us, for one thing, and electricity plays a part in how we work, down to a cellular level. Eumelanin, a dark pigment from which we get our eye, hair, and skin color, has been understood for nearly 50 years to conduct electricity. For almost as long, scientists have been looking for ways to take advantage of this trait, but eumelanin’s conductivity has been too weak to serve any practical purpose beyond its biological role.

Now, however, a multi-discipline team of scientists from Italy — their findings were published in Frontiers in Chemistry on March 26 — have figured out how to boost that conductivity to the point that it may become usable as a coating for medical implants and other devices that human bodies won’t reject.

“This is the first [stepping] stone of a long process that now can start,” said chemist and lead author Alessandro Pezzella. 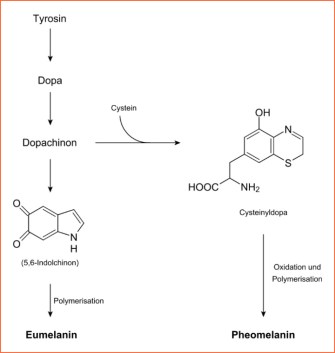 What’s been holding eumelanin’s conductivity back

Other teams have attempted to boost the conductivity of eumelanin by combining it with metals or super-heating it with graphene have helped increase it, but required adding metals and other chemicals the human body would reject.

Pezzella’s team wondered if the problem was that the natural molecular structure of eumelanin was too chaotic, and too loosely packed to maintain a strong current. Says Pezzella, “All of the chemical and physical analyses of eumelanin paint the same picture — of electron-sharing molecular sheets, stacked messily together. The answer seemed obvious: Neaten the stacks and align the sheets, so they can all share electrons — then the electricity will flow.”

Turning up the heat on eumelanin

They decided to try and achieve this, says co-author and electrical engineer Paolo Tassini, through “basically, heating in a vacuum” to tighten up eumelanin by getting rid of its water and vapor molecules. While water is often an aid to conductivity, in the case or eumelanin, it was suspected it might be holding it back. The process they employed isn’t new — it’s called “annealing” — and has been used before to boost conductivity in other materials.

Clumps of eumelanin were sealed in a high vacuum and heated to 600° C. Says Tassini, “We heated these eumelanin films — no thicker than a bacterium — under vacuum conditions, from 30 min up to 6 hours. We call the resulting material ‘High Vacuum Annealed Eumelanin,’ [or] ‘HVAE.'”

“The HVAE films were now dark brown and about as thick as a virus,” he says.

Pezzella tells phys.org, “The conductivity of the films increased billion-fold to an unprecedented value of over 300 S/cm, after annealing at 600°C for 2 hours.” This is still far less than conductivity in metals, but it’s now within a useful range.

What’s next for eumelanin

The process Pezzella’s team came up with is simple enough that it will be easy to boost eumelanin’s conductivity going forward, but that’s just a beginning. He hopes to architect a simple-to-handle version of HVAE, perhaps a sheet of it, that will allow others to begin experimenting with using it as a coating for implantable technology. “Further research is needed to fully understand the ionic vs. electronic contributions in eumelanin conductivity,” says Pezzella, “which could be key to how eumelanin is used practically in implantable electronics.”

The human brain makes a striking deviation from the normal building plan.
Health

The cause of Alzheimer’s is still not fully understood, but we might be able to vaccinate against it anyway.
The Future

Some of the most popular “anti-aging” diets show promise in rodent studies. But are they effective for humans?
Health

“This will be one of the most important datasets since the mapping of the Human Genome.”
Up Next
High Culture

How the story of a statistics student being late to class became the inspiration for the protagonist of Good Will Hunting.