Eric Weinstein is an American mathematician and economist. He earned his Ph.D in mathematical physics from Harvard University in 1992, is a research fellow at the Mathematical Institute of Oxford University, and is a[…]
Go to Profile 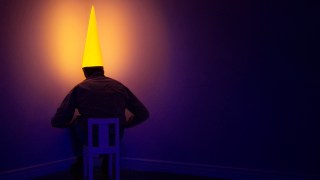 Our Cult of Achievement Is Crushing the Genius Out of People

Humans worship at the altar of excellence, but is our complete obsession with this "quality controlled" mode of intellect holding us back?
▸
5 min
—
with
Eric Weinstein

We want our surgeons to be excellent. We wants our classical music performers to be excellent. But do we really want excellence everywhere? This is the provocative line of thought economist and mathematician Eric Weinstein is currently chasing. We’ve figured out how to reliably teach excellence, which is useful — but there is a trade-off. Individuals and education institutions become hyper-focused on cutting variant individuals to a certain shape, pushing them into a mold so they can passably imitate the “excellent” population, but not really perform. “The key question is: who are these high-variance individuals? Why are our schools filled with dyslexics? Why are there so many kids diagnosed with ADHD? My claim is these are giant underserved populations who are not meant for the excellence model.” To that end, Weinstein suggests that the label of ‘learning disabled’ is severely misguided. Perhaps we should call this phenomenon what it more accurately is: a teaching disability. How much genius is squandered by muting the strengths of these populations?

Eric Weinstein: I think that very few people see the words 'excellence' or 'consensus' as anything other than the most positive of words. These are the habits that most people seek to cultivate. They wish to be part of the consensus. They wish to be excellent in both their behavior and hope for excellent outcomes. I think the problem is that, we didn’t realize that excellence so far as it goes is fine but it’s involved in a trade-off. And that trade-off has to do with the fact that excellence is really about quality control. It’s about the fact that if I’m going to go for, let’s say, a classical music concert, I want to assume that the piece will be played flawlessly and I will concentrate only on the interpretive aspects of the piece above that. But, in fact, quality control can be deadly. For example, if in a jazz date where an improviser takes few risks the music may be pleasant enough as background music but it’s scarcely the sort of thing that would have animated the bebop generation who played live dates under open-mic conditions never knowing what would happen next. Perhaps the most famous jazz album of all time was Miles Davis’ 'Kind of Blue', and if you look at the sheet music for that date almost nothing was written down. It was just a question of bringing the most amazing minds together. And you can even hear a few flaws on that album which make it so exciting.

So I think that the problem is that, we have to realize that excellence is about hill climbing. It’s about the fabled 10,000 hours. It’s about practice making perfect. And this is something that, to the credit of excellence, it’s something we do know how to teach. Perhaps we don’t know how to teach everyone how to achieve it but there’s always a class of people who through dedicated repetition will be able to bring their variance under extraordinary pressure so that they are reliable members of our society. We want this in our surgeons, often. We want this in our classical music performers. But the question is: do we want it everywhere? And because we do know how to teach excellence we’ve blinded ourselves to the role that a different thought process is involved in, which I would associate with genius. The key question is: who are these high-variance individuals? Why are our schools filled with dyslexics? Why are there so many kids diagnosed with ADHD? My claim is these are giant underserved populations who are not meant for the excellence model. They are meant to be the innovators, the people who bring us new forms of music that others will seek to perfect and hone in their performance.

But these are the sorts of people who bring us new scientific vistas, who explore new terrain, and what we’ve done is we’ve created a system which effectively demonizes these different patterns. We even call these things learning disabilities when, in fact, if you look at the learning disabled population they very often are the most intellectual, accomplished members of society. But we put them through a torture chamber of K through 12 education where we attempt to convince the teachers, who have no idea how to serve this population—we try to make sure that there’s no indication that there are teaching disabilities by pushing the responsibility onto the students.

These are the learning disabled but in no real terms is this population learning disabled. It’s a different and a somewhat alien population that we have tried to machine to a point where they look as close to the excellent population as possible. So it’s not really that I’m against excellence. What I’m really against is the idea that we’ve absorbed the concept of excellence into the very fabric of our society so that all those who don’t function within that idiom feel that they are somehow abhorrent and less than, when, in fact, these are the people who are going to cure our cancers. These are the people who are going to create new multi-billion dollar industries.

And, in fact, the problem is, is that we don’t realize that genius is really about adaptive valley crossing. It’s about taking on risk, taking on cost, doing things that make almost no sense to anyone else and can only be shown to have been sensible after the fact because, in fact, and I think, you know, Jim Watson said this beautifully, he said if you’re really going to do anything big you are by definition unqualified to do it. So the entire culture of credentialism, of professionalism, is really a culture of excellence. But, in fact, society is run by power laws. The very thick tails of these distributions suggest that life isn’t normally distributed but distributed by power laws. And we need a special class of people to play those tails, to get us the returns, to power us forward and advance society. And so what I’m really interested in is not being blinded by excellence to the prospects for other modalities, in particular genius.

Is Hope for Weak People? One Man’s Journey through Life with MS