The last recession took many Americans by surprise. Unsustainable real estate practices were hidden — perhaps in plain sight, yet the housing crash gave the nation whiplash. The next recession is predicted to be caused by another debt crisis: students. Even with advanced notice we seem paralyzed in the headlights.

American students currently owe $1.6 trillion. Households with student debt owe an average of $47,671. Going to medical school sets the average citizen back $196,520; pharmacy school grads, $166,528. Want to be a dentist? You’re looking at $285,184 in debt. Incredibly, between 2014 and 2016, 3.9 million undergrads that borrowed money from the government dropped out, meaning that many don’t even have a degree to show for their debt.

The topic seems to be important for Democratic presidential candidates, such as Elizabeth Warren and Bernie Sanders. If one of them should win, they will be tasked with fixing a system that appears to be broken beyond repair. Moderate liberals might be taken aback by radical ideas on the debate stage, yet one thing is clear: immediate action needs to be taken for students (and former students) if we want to avoid the fate of 2007.

During the debut of The Portal, a new podcast by Eric Weinstein, the mathematician chats with Peter Thiel (Weinstein serves as managing director of Thiel Capital) about the student debt crisis. Education is an important topic for Weinstein: during a TEDxYouth talk he champions a system based on exploring and exposing wonder, which happens to be the goal of his podcast as well.

First off, the chat itself provides an important bridge in modern American culture, with Weinstein predominantly on the left side of politics and Thiel on the other end of the spectrum. Even in disagreement, the two men remain civil and open — a lesson in itself.

They mention the importance of polymaths, agreeing that being educated in a wide range of subjects is far more valuable than specialism. The problem is that in academia, specialization is rewarded while being a polymath is frowned upon. Anyone challenging a field, especially from the outside but also from within, is oppressed by the weight of consensus. As Thiel says:

“In a healthy system, you can have wild dissent and it’s not threatening because everyone knows the system is healthy. But in an unhealthy system, the dissent becomes much more dangerous.”

While a university degree is seen as important, Thiel notes that going to a university ranked #100 instead of #1 should be questioned. Weinstein floats the idea of a CED: if you can prove you have the equivalent knowledge of a college graduate through an online testing system, you should be awarded the equivalence of a degree. While Thiel is concerned about the potential of a hack-free system, he appreciates the idea.

The discussion moves into student debt. In 2005, Congress passed the Bankruptcy Abuse Prevention and Consumer Protection Act. Don’t mistake this for Elizabeth Warren-style protections. The bill, first drafted in 1997, was reintroduced by Republican Sen. Chuck Grassley in 2004, supported by banks and credit card companies — and virtually no one else (except perhaps Joe Biden, who voted in favor).

A key provision makes it nearly impossible for citizens to be absolved of student debt when filing for bankruptcy (save proof of “undue hardship”). Thiel notes that if you don’t pay off student debt by age 65, the government garnishes your social security checks. Basically, the only way out is paying it off — which, considering interest rates, is nearly impossible for many — or death.

Beginning your career in debt puts undue stress on everyone, especially young workers. Weinstein says, “It’s always dangerous to be burdened with too much debt. It limits your freedom of action and it seems especially pernicious to do this early in your career.”

He notes that university presidents, emasculated of the power of criticism, instead focus their efforts on fundraising. This creates a system dominated by financial growth and reward, not education. (Malcolm Gladwell tackles this topic brilliantly.) The benefit is not worth the cost. Weinstein continues, 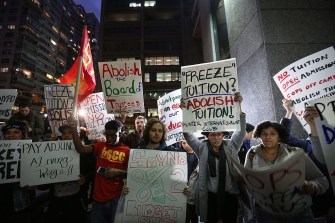 Students hold placards as they stage a demonstration at the Hunter College, which is a part of New York City University, to protest ballooning student loan debt for higher education and rally for tuition-free public colleges in New York on November 13, 2015.

One possible solution reverses the 2005 bill by making student debt dischargeable in bankruptcy. Then they take a step further: part of that debt would be paid for by the university. Give them some skin in the game. You can’t harvest all the reward without taking on any risk.

In March, Education Secretary Betsy Devos announced she wants to cut the nation’s education budget by $7.1 billion. The proposal includes slashing after-school programs in impoverished areas. As Weinstein and Thiel argue during The Portal, the education system is already slanted toward the privileged; such an aggressive budget cut would only tilt it further.

Perhaps the system is already too broken. I was able to graduate from Rutgers, a state university, in the mid-’90s for under $30,000, tuition, fees, and housing included. Today such a figure barely covers two years of tuition. I can’t imagine being tens of thousands of dollars in debt for a degree I never achieved because it was too expensive, yet that’s the reality millions of Americans face today.

An education is a necessary relationship between children and young adults and the society in which they live. Profit-hoarding administrators and the politicians they buy have inserted themselves in the middle, ruining it for both sides. Perhaps, as was briefly floated during The Portal, we’ve outgrown the current model; the digital world might offer learning opportunities well beyond what any university can provide.

Then again, most of my education took place outside of classrooms, learning how to be an adult in the company of peers. Take that away and you create more self-righteous bubbles in both right- and left-leaning circles. The tension created on college campuses is an important stepping stone in a democracy. Strip that away and you destroy one of the most important aspects of education.

The solution above is one we need to consider: hold universities accountable for the services they provide at the prices they charge. If they refuse to to put skin into the game, we need to create alternatives.

The Knights Templar were not only skilled fighters, but also clever bankers who played a crucial role in the development of Europe’s financial systems.
The Future

From 260-year-old ciphers to the most recent Zodiac Killer solution, these unbreakable codes just needed time.

Here’s how to design a work environment that gives control to employees and stimulates open conversation.
▸
with
Todd Rose
The Past

Soviet researchers studied crime through a Marxist-Leninist lens. Under Lenin, a humanitarian approach to criminality briefly emerged, but dissipated when Stalin rose to power.
Up Next
Health

Here’s why you might eat greenhouse gases in the future.