Yanis Varoufakis is the former finance minister of Greece and the cofounder of an international grassroots movement, DiEM25, that is campaigning for the revival of democracy in Europe. He is[…]
Go to Profile 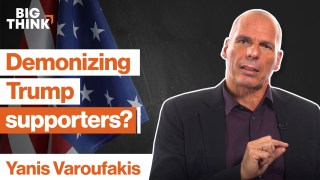 There are ways to engage with someone with whom you don't agree.
▸
4 min
—
with
Yanis Varoufakis

YANIS VAROUFAKIS: One of the aspects of the last couple of years here in the United States it gives me a lot of grief is the manner in which the democratic establishment has tried to demonize Trump supporters. I personally don't believe that people are born problematic or they are born with racist or anti-human predispositions. These are social after effects. The manner in which the democratic establishment has tried to blame Vladimir Putin, Facebook for the loss of the election – Hillary's loss. Painting those who voted for Trump as stooges of the KGB or of Facebook or Cambridge Analytica. I have no doubt that there was some influence there. But I'm appalled by this polarization. Because when you demonize those who voted against you then there's no chance of a democratic debate. You've lost it completely. Then you go into a state of civil war.

There are two ways of approaching a difference of opinion. There are two ways of criticizing somebody else's world view. One is an internal critique and another one is an external critique. The external critique is to say to somebody your assumptions on which you base your whole analysis are wrong. That doesn't get you far. It's like saying to a Muslim that, you know, your belief in Islam is wrong. You may think that is wrong but the conversation ends there. So external critique is not a way to relate to people. It's not even a way to understand other people. So when I'm asked how do I approach differences of opinion and so on I say well, through internal critiquing. Internal critiquing means this: Let's take your assumptions for granted. Let's assume that the world is as you assume it to be. But now let's see whether we reach through a process of logic your conclusions given your assumptions. Because if I can convince you that your conclusions are not consistent with your own assumptions then there's a chance we can have a conversation. So when I was referring to the Greek debt crisis to Christine Lagarde who's representing, is the managing director of the international monetary fund, I would never walk into her office and say look, your understanding of the world sucks because capitalism is an unfair and ridiculous system. That would be the end of the conversation and would be equivalent to saying to a Muslim that Islam is a bad idea. So what my strategy was – and I believe there was value to this not just in order to gain some powers of persuasion but in order to help my own thinking evolve and mature. Say okay, let's take your liberal or neo-liberal view of capitalism for granted. Is what you're doing here today consistent with your own views about capitalism? And at that point you realize that there is room for agreement or at least for agreement of things that matter and which would have made a difference to your suffering people back in Greece.

So I think that is fundamental. If I were in a room with somebody who had voted Trump I would first want to listen to their reasons for voting for Trump. Secondly try to be absolutely understanding of the great discontent and disappointment caused by President Obama when after 2008 he was absolutely totally comped by the establishment that created the causes of the financial collapse of 2008 and effectively turned against the people who had voted for him. Let's not forget that lots of the people who voted for Trump had voted for Obama in 2008 and then going to the internal critique.

What is ESG investing?