There’s this odd idea out there right now that centers around a planet named “Nibiru,” or Planet X, which supposedly lives in the outer solar system and will be headed back toward Earth shortly in its long, eccentric orbit. When that orbit brings it much closer to our planet, it’s supposed to cause massive problems such as volcanic eruptions, tsunamis, and more.

Despite the fact that NASA has debunked this planetary legend, it persists. And conspiracy theorists continue to claim that NASA is simply hiding it. 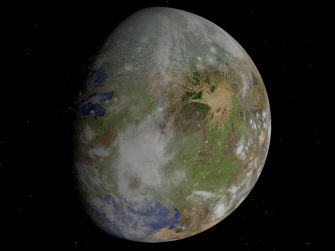 Now, those who believe in said planet are proposing that the “Rapture” — that is, the “ascension to heaven” of those who are truly to be “saved” by Western deity Jesus Christ, will begin on April 23, with Nibiru’s sudden appearance, culminating in the “rapture” this November. In other words, it’s expected that “Beam me up, Scotty” will become more than a figure of speech for followers of Christianity.

A similar doomsday was considered prophesy on December 21 of 2012. In that year, on that date, the center of the galaxy, Earth, and the Sun, combined with this rogue planet, would align in such a way as to tear the Earth off its axis, and maybe its orbit around the sun.

“What [they] do not tell you is that this happens every year on December 21.” — Neil deGrasse Tyson (well … except for the Planet X factor.)

In a time of great political upheaval and uncertainty, folks are certainly more likely to believe these things. (And, for some, it’s kinda like: “Bring it — just end this nightmare already!”)

“A great sign appeared in heaven: a woman clothed with the sun, with the moon under her feet and a crown of twelve stars on her head. She was pregnant, and cried out in pain as she was about to give birth.”

What The Daily Express is claiming is condensed here:

“On April 23, the sun and moon will be in Virgo, as will Jupiter, which represents the Messiah. Experts at first dismissed this claim when they discovered this alignment happens every 12 years. However, the conspiracy theories claim another planetary alignment, representing ‘the Lion of the tribe of Judah’, will make this time the Rapture.”

The “Lion” mentioned in that passage is Planet X, or Nibiru, which NASA has established doesn’t exist.

But the kicker? Aside from the religious mythology associated with this, what that paragraph states as the expected astral and planetary arrangements are totally wrong. Jupiter is actually in the constellation Libra all day and night on April 23, and the moon, between Leo and Cancer. The sun, which is out of view when Jupiter and the moon are invisible, is by Pisces. None of those planetary and astral bodies is in Virgo at that time in April. And even if they were … just no.

In the last 2000 years, there have been thousands of events that were predicted, largely on biblical concepts, to bring the end of the world/civilization/humans/life/etc.

More likely, we’re going to instead die slow, suffocating deaths. Or at least mass extinctions that take millions of years to recover from.

And for more about conspiracy theories, check out the series, “This is Not a Conspiracy Theory” — episode one is here:

Related
13.8
The weirdness of quantum mechanics forces scientists to confront philosophy
Though quantum mechanics is an incredibly successful theory, nobody knows what it means. Scientists now must confront its philosophical implications.
Neuropsych
Why is a Starbucks loyalty rewards program making customers so angry?
The rewards price to get a free cup of hot coffee at Starbucks is going up.
Empowering growth
7 essential management training topics for every team leader
From emotional intelligence to problem solving, these management training topics will set team leaders up for success.
Thinking
What if you could rewire your brain to conquer suffering? Buddhism says you can
For Buddhists, the “Four Noble Truths” offer a path to lasting happiness.
Hard Science
Solved: 500-year-old mystery about bubbles that puzzled Leonardo da Vinci
The solution involves the infamous Navier-Stokes equations, which are so difficult, there is a $1-million prize for solving them.
Up Next
Starts With A Bang
‘Losing The Nobel Prize’ Makes A Good Point, But Misses A Great One
BICEP2 scientist Brian Keating’s new book is honest and insightful, but just as notable for what it fails to recognize.Imagine what it’s like to be a scientist working on a […]