China is installing malware on travelers’ smartphones as they enter the country at parts of its border, according to a joint report from Motherboard, Süddeutsche Zeitung, the Guardian, the New York Times, and the German public broadcaster NDR. The report found that Chinese border officials are searching travelers’ phones and installing software that records calendar entries, phone contacts, call logs, and text messages and then uploads all that information to a server. How China is using that information isn’t exactly clear yet.

It’s happening at the border in China’s Xinjiang region, which abuts Kyrgyzstan and is home to millions of Uyghur Muslims — an ethnic minority of whom at least 120,000 have been detained in China’s so-called re-education camps since 2014. The malware reportedly scans devices for Islamic extremist content but also for “innocuous Islamic material, academic books on Islam by leading researchers, and even music from a Japanese metal band,” VICE reports.

China has been ramping up surveillance on its own citizens for years, installing more than 170 million surveillance cameras and implementing a social credit system that penalizes citizens not only for things like having bad credit, but also for smoking in public and jaywalking. But the new report shows how China is now applying similar surveillance to foreigners. 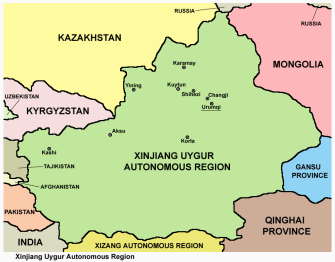 A map of the Xinjian region, where reporters discovered the Chinese were installing spyware on traveler’s phone.

“[This app] provides yet another source of evidence showing how pervasive mass surveillance is being carried out in Xinjiang. We already know that Xinjiang residents — particularly Turkic Muslims — are subjected to round-the-clock and multidimensional surveillance in the region,” said Maya Wang, China senior researcher at Human Rights Watch. “What you’ve found goes beyond that: it suggests that even foreigners are subjected to such mass, and unlawful surveillance.”

The malware app — called BXAQ or Fengcai — displays itself as a visible icon on travelers’ phones, suggesting China isn’t trying to hide its surveillance efforts. 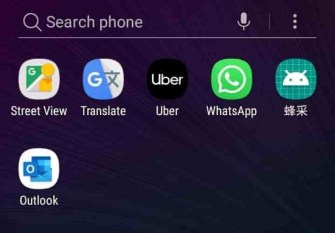 Some antivirus programs are now reportedly flagging the app as malware, including Avast, McAfee, and Check Point. But if you’re planning a trip to China and would rather not take any risks, consider doing what redditor omni_wisdumb does: use a separate laptop and smartphone when crossing into the world’s most populous country.

“I’m in the gem trade so I travel internationally like 1-2 times a month. China and Hong Kong business trips happening often.

I’ve been warning my friends, and on posts here on Reddit, about this for a while now. Starting about 1.5 years ago I began seeing the Chinese border control asking to see my phone and laptop, insisting I put in my password so that they can look at my texts and photos.

People thought I was making shit up or was doing something suspicious. Nope. If anything, with my multipassport travel history, you’d think the border patrol wouldn’t be so inquisitive as if it’s out of the ordinary for me to be traveling.

The first time I denied them, and they eventually let me through when I showed them I had meetings to attend. The second time they said if be denied entry and I caved in but said they had to do it on front of me, which they did. The third time they insisted they take them back behind the wall into their little office (I had 2 phones this time). I turned around and went back home. Ever since then I go with a special phone and laptop I bought just for China/HK trips and I don’t have anything on it other than basic texts. Also, fair warning, it’s NOT just China. This practice is becoming more and more common with everyone as a sort of tit-for-tat in “security”. And the US actually started this.”

Concerning that last point, it’s true — U.S. customs can seize and search travelers’ smartphones and laptops when they reenter the country, even if you’re a citizen. What’s more, officials don’t need a warrant to search devices, and the amount of searches has been steadily increasing since 2012. Canada has similar laws.

So, while China’s Orwellian surveillance system is alarming, it’s probably not as different from Western countries’ surveillance programs as some would like it to be.

(By the way, here’s the Japanese metal song China apparently doesn’t want you to listen to: Unholy Grave’s “Taiwan: Another China.”)

The questions about which massive structures to build, and where, are actually very hard to answer. Infrastructure is always about the future: It takes years to construct, and lasts for years beyond that.
The Past

How the British obsession with tea triggered wars, led to bizarre espionage, and changed the world — many times.
Up Next
The Present

Why the community that sings together stays together

Singing is universal. It is found in all cultures and, despite protestations of tone deafness, the vast majority of people can sing.