Facebook and Twitter said they’ve removed suspicious accounts and pages that have been spreading disinformation about protesters in Hong Kong. Both social media companies said the accounts appear to be linked to a coordinated smear campaign backed by the Chinese government.

Posts from these accounts portray the protesters as radical and violent. One example posted to Facebook reads, in part: “They will shoot to kill with a slingshot. They took a nurse’s right eye. They are the Hong Kong cockroaches.” Another post likens the protesters to ISIS fighters. On Twitter, one message read, “We don’t want you radical people in Hong Kong. Just get out of here!”

Facebook said it had deleted five accounts, seven pages, and three groups, all of which were followed by more than 15,000 other accounts, combined.

In a blog post, Twitter wrote that many of these suspicious accounts used virtual private networks (VPNs) to mask their IP addresses. But some that didn’t use VPNs had IP addresses in mainland China.

“The accounts we are sharing today represent the most active portions of this campaign; a larger, spammy network of approximately 200,000 accounts — many created following our initial suspensions — were proactively suspended before they were substantially active on the service,” Twitter wrote.

“Two months on, the escalating violence in Hong Kong has taken a heavy toll on the social order,” one sponsored tweet read, adding, “all walks of life in Hong Kong called for a brake to be put on the blatant violence and for order to be restored.” 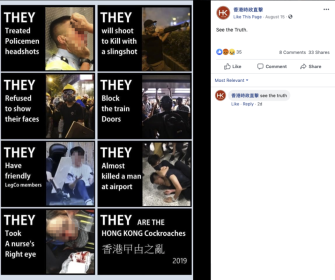 ​China is taking notes from Russia

The New York Timeswrote that China has “adopted Russia’s playbook” in its recent string of social media manipulation. That seems true. After all, even though both nations are known for using censorship and disinformation to control public opinion, they’ve historically used different strategies to do so. At the 2019 RSA Conference, an annual IT event, researchers described the basic difference between the two: Russia’s strategy is disruptive and destructive, China’s is about using wide-reaching control to paint a positive image of the state.

“Today, China employs three primary tactics to control people online,” Kelly Sheridan wrote in an article for Dark Reading, in which she spoke with Priscilla Moriuchi, head of nation-state research at Recorded Future. “The first is outright censorship: People are blocked from posting comments or posts on certain topics, and recipients of banned messages don’t receive them. Next up is social media regulation: Platforms including Twitter and Facebook are blocked, and other social media is required to comply with state censorship organizations. Finally, it distributes fake comments.”

China’s goal, it seems, is to fill its censored internet with positive comments about the state. Meanwhile, Russia’s strategy is markedly more offensive.

China knows how successful Russia has been in sowing discord in American public discourse, starting with the 2016 presidential election and, likely, continuing to this very moment. So it would be little surprise if China is simply taking notes from the Kremlin to pivot to a new style of disinformation warfare. After all, as the New York Times notes, Bangladesh, Iran, and Venezuela already have done the same.

​What are Hong Kongers protesting?

For the eleventh straight weekend, hundreds of thousands of Hong Kongers jammed the streets of their city — undeterred by tropical rainstorms, a police ban, and the omnipresent threat of violence — to protest a proposed law that would allow officials to extradite citizens to mainland China. Now, their demands also include for leader Carrie Lam to step down, investigations into police brutality, and, in general, more democratic freedoms.

Hong Kong officials have already arrested hundreds of protestors. Chinese paramilitary forces were seen practicing crowd control in a stadium near the Hong Kong border. As of Monday, neither side has shown any sign of giving up ground anytime soon.

On Sunday, NPRspoke with Alvin Yeung, a Hong Kong lawmaker and leader of the Civic Party, a pro-democracy political party, about the ongoing protests.

“All I can say is Hong Kong people are determined, and we are not easy to give up,” Yeung said. “We wish to be as peaceful as possible to tell not Hong Kong people and Beijing but also to the rest of the world that our demands are reasonable. Our demands are highly sensible. And it is the Hong Kong government that should be responsible for all this. As to strategy, Hong Kong people has been learning from Bruce Lee, the cultural master, that we have to be water. So whenever we can, we would show our force, show our power and determination. But we would try to avoid having clashes with the police.”

Social media distorts the reality of the public sphere.
Up Next
The Present

A new study estimated the untapped potential of wind energy across Europe.