Want to live and work in Canada? That dream could become a reality now the government has announced plans to accept more than a million immigrants in the next three years.

Introducing the report, Hussen, who originally came to Canada as a Somali refugee, said: “Immigrants and their descendants have made immeasurable contributions to Canada, and our future success depends on continuing to ensure they are welcomed and well-integrated.”

According to the report, one in five people living in Canada was born outside the country, while more than six million new immigrants have arrived since 1990.

Immigration is seen as key to helping strengthen the Canadian economy. With the average immigrant being young, it can help to tackle the challenges of an ageing population. The report says the worker-to-retiree ratio is predicted to reach 2:1 by 2036, compared to 4.2:1 in 2012.

Just under half (48%) of the highest target of admissions for 2021 will come under Economic Programs – to fill skills gaps in the labour market.

In the World Economic Forum’s Global Competitiveness Report 2018, Canada ranked 12th overall, with a perfect score of 100 for macroeconomic stability, as well as coming top of the countries with the most diverse workforces. 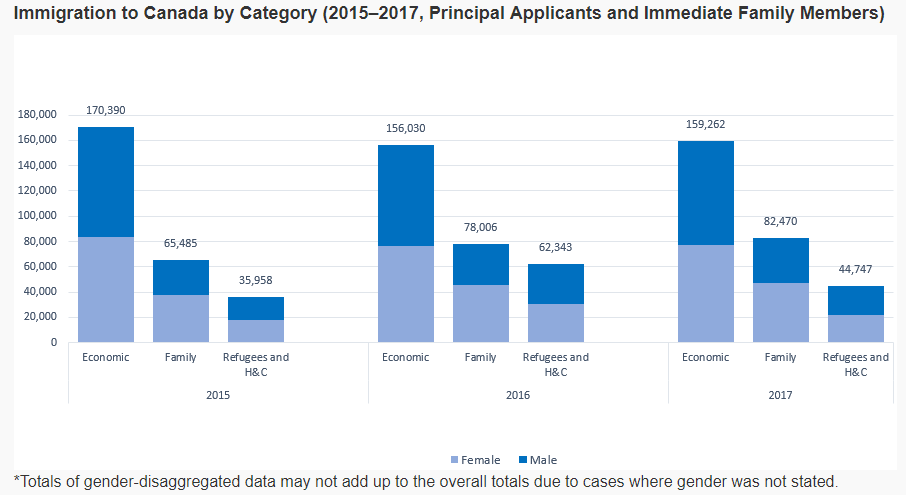 Immigration to Canada by type between 2015 and 2017.Image: Government of Canada

More than half the immigrants admitted in 2017 came under Economic Class programmes, while 44,000 were resettled refugees, protected persons and people admitted under humanitarian, compassionate and public policy considerations.

Canada is seen to be a world-leader in terms of its immigration policies, with the UN’s High Commissioner for Refugees, Filippo Grandi praising the country for its “extraordinary generosity, openness and willingness” to help displaced people.

But Canada’s new pledge is just a drop in the ocean compared to the numbers who need to be resettled. The UNHCR said the total number of people who were forcibly displaced reached a record 68.5 million in 2017, while the number of refugees needing to be resettled had climbed to 1.19 million by the end of 2017.

Throughout history, anarchists have been responsible for bombings and assassinations, including some very recent ones.