“What should the U.S. do about The Wall?” is a question that’s destined to divide many Americans. But there’s one proposal for the U.S.-Mexico border that, at least in theory, seems agreeable to everyone.

A consortium of 28 engineers and scientists has proposed that – instead of building a simple barrier along the approximately 2,000-mile border – the U.S. and Mexico could work together to build an industrial park along the divide that would include desalination facilities, solar energy panels, wind turbines and natural gas pipelines. The plan would not only provide the region with border security – considering it’d be a continuous train of heavily guarded industrial facilities – but also energy, water and jobs.

In a white paper, the team called it a “future energy, water, industry and education park” that “will create massive opportunities for employment and prosperity.”

“Just like the transcontinental railroad transformed the United States in the 19th century, or the Interstate system transformed the 20th century, this would be a national infrastructure project for the 21st century,” Luciano Castillo, Purdue University’s Kenninger Professor of Renewable Energy and Power Systems and lead of the consortium, told Phys.org. “It would do for the Southwest what the Tennessee Valley Authority has done for the Southeast over the last several decades.” 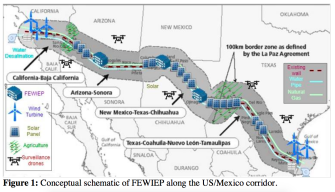 Building such a park would undoubtedly be a complicated, expensive undertaking. The team estimates the solar energy arm of the project alone would require 8 million solar panels and cost $4.5 billion. Still, many parts of the border region are ideal for generating renewable energy. The white paper describes how the areas of strong winds in the Gulf and Baja California regions “are ideal for wind farms.”

Similarly, the desalination part of the proposal would bring water to California, Texas, New Mexico, and Arizona – areas “in the grip of severe to exceptional drought conditions,” the paper states. The team added that these efforts, which would include an “interconnected super-pipe system” along the entirety of the border, could help make the U.S. a global leader in the industry.

“At first blush the idea seems too big, too aggressive, but consider the Roman aqueducts or the transcontinental railroads—enormous undertakings that gave enormous benefits. The cost of providing basic, essential infrastructure to the border lands is tiny compared to the opportunities it creates,” Ronald Adrian, Regent’s Professor at Arizona State University, told Phys.org. “I view this project as a means of creating wealth by turning unused land of little value along the border into valuable land that has power, water access and ultimately agriculture, industry, jobs, workers and communities. With only a wall, you still have unused land of little value.”

So far, the team has presented their proposal to three U.S. representatives and one senator. It’s a plan that they say will help reduce illegal immigration while providing more jobs and cleaner energy to both U.S. and Mexico.

“Democrats want a Green New Deal. Republicans want border security,” Castillo told Scientific American. “Both parties could win. It could be a win–win for the U.S. and Mexico, too. This idea could spark a completely new conversation about the border. And we need that.”

Tags
alternative energyeconomicsenergyinnovationpolicypoliticssolar energy
In this article
alternative energyeconomicsenergyinnovationpolicypoliticssolar energy
Related
The Present
How heat pumps of the 1800s are becoming the technology of the future
Innovative thinking has done away with problems that long dogged the electric devices — and both scientists and environmentalists are excited about the possibilities.
Starts With A Bang
This shockingly simple battery could store energy forever
Capacitors, acid batteries, and other methods of storing electric charges all lose energy over time. These gravity-fed batteries won’t.
The Present
How California could save its rain instead of letting it drain into the ocean
Why can’t more rainwater be collected for the long, dry spring and summer when it’s needed?
Hard Science
Scientists use laser beam to divert lightning strikes
Laser-guided lightning systems could someday offer much greater protection than lightning rods.
The Future
7 major science and tech breakthroughs of 2022
It was a particularly good year for biotech and medical technology. There were also notable advances in energy.
Up Next
Strange Maps
Why this Austrian village has its own metro system — it’s less than one-mile long
Less than a mile long, the Dorfbahn in Serfaus is also the world’s highest metro system.