Reading, studies show, increases empathy and charitable thinking. Fiction has even been credited with helping readers improve their understanding of others and make changes in their own lives.

Knowing the power of reading, a network of cities around the globe has developed a recommended reading list inspired by the UN’s 17 Sustainable Development Goals (SDG), the global benchmarks designed to help the world work toward a better future.

UNESCO’s Cities of Literature – a group that includes Durban in South Africa, Manchester in the UK and Baghdad in Iraq – selected novels and true-life stories on key SDG themes, including poverty, hunger and sustainability.

Use their picks to widen your own perspectives and help fuel the world’s progress toward achieving the UN’s global goals. Here’s a selection of their recommendations: 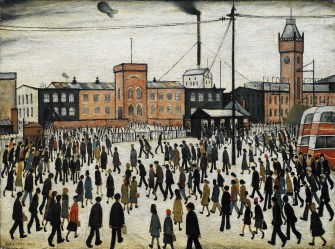 A painting by English artist LS Lowry (1887 – 1976) entitled ‘Going To Work’, and depicting factory workers in the snow outside the main entrance to the Park Works of the Mather and Platt engineering firm in Newton Heath, Manchester, 1943.

1. The Condition of the Working Class in England by Friedrich Engels

Manchester recommends Friedrich Engels’ classic book, The Condition of the Working Class in England, a call to arms sparked by the poverty Engels saw in the country in the 1840s. German-born Engels explores the human cost of the industrial revolution, depicting overcrowded housing, abject poverty, child labor and sexual exploitation. It is considered a pioneering work of social history.

Icelandic writer Halldór Laxness’ book Independent People, recommended by Reykjavik, tells the story of a sheep farmer’s heroic determination to eke out an independent living in the harsh landscape of rural Iceland. The brunt of his obsessive quest is felt most by his family as his own daughter becomes equally determined to become independent from her father. Laxness tells this battle of wills with humor in a book writer Annie Proulx calls “sardonic, clever and brilliant.”

3. A Fist or a Heart by Kristín Eiríksdóttir

The novella A Fist or a Heart by Kristín Eiríksdóttir tells the story of Elín Jónsdóttir, an isolated woman in her seventies who makes props and prosthetics for theater and television programs. She meets a younger woman, also a loner, and they discover common ground in their difficult childhoods. The connection unearths painful memories as Elin’s grasp on reality weakens. The book, selected by the city of Reykjavik, explores themes such as trauma and personal connection. It won the Icelandic Literary Prize and author Eiríksdóttir is considered one of the most original voices of her generation. Written by two recent graduates from the University of Cambridge, Taking Up Space tackles the struggles faced by women of color in predominantly white institutions. This non-fiction book functions as a manifesto for change and helps students advocate for themselves at university, covering everything from academics to activism, mental health and relationships. Called “groundbreaking” by the Guardian, this book was recommended by the city of Nottingham in the United Kingdom.

Admissions is a collection of short stories that shares the experiences of eight women – doctors, nurses, cooks and cleaners – who have dedicated their lives to caring. The fictional tales, selected by the New Zealand city of Dunedin, recount the highs and lows of working in clinical medicine. The book demonstrates the many ways different women from all walks of life keep a struggling institution up and running while navigating their lives at home.

Darren Simpson’s young adult book Scavengers tells the story of two characters, Landfill and Old Babagoo, who live in a walled kingdom. Old Babagoo looks after Landfill on the condition that he follows his rules: never come looking outside and never rise above the wall. The book, selected by the UK’s city of Nottingham, explores themes such as sustainability, prejudice and control in a work packed with twists and turns.

7. The Trespassers by Meg Mundell

Meg Mundell’s The Trespassers tells the story of a shipload of migrant workers leaving the UK and looking for a fresh start in Australia. When a crew member is murdered and people start falling gravely ill, it becomes unclear where the real danger lies. The book is inspired by the true story of the Ticonderoga, a ‘fever ship’ full of migrant workers that reached Melbourne in 1852 and led to the creation of Australia’s first quarantine station. This book, selected by Australia’s Melbourne, was called “clever,” “gripping” and “powerful” by reviewers.

An interactive “globe of notability” shows the curious correspondences and the strange landscape of global fame.
The Present

It is through speaking and listening that human beings become who they are.
The Future

Uploading your mind is not a pathway to immortality. Instead, it will create a possibly hostile digital doppelgänger.
Pessimists Archive

Moral panics about the content of children’s cartoons and other forms of entertainment have a long history.
Thinking

There are two conceptions of free will: “straight” and “mixed.”
Up Next
Health

Increasing numbers of seniors need help with basic tasks. It doesn’t have to be that way.