Hey, it’s the future. We’re supposed to have flying cars, right? Well, here’s your flying car, sort of and again. It’s slated to go on sale in 2019. It’s called the BlackFly and the company manufacturing it, Opener, is backed at least partially by Alphabet’s Larry Page, who’s been rumored to have been tinkering with such craft for a while, working with a few partners. Alan Eustace, who’s been on Big Think, is an Opener technical advisor.

BlackFly isn’t really much of a car-car. It can only travel on roads when it’s being carried by its pair of carts, so your seamless, cruise-down-from-the-sky-and-onto-the-road vehicle hasn’t quite arrived yet. And you’ll be driving BlackFly solo—it holds just one person of up to 6.5 feet in height and weighing in a 250 lbs. But still, wow.

BlackFly in the sky

Here’s the official launch video. Imagine seeing this while out on a hike.

As you might expect, where the strikingly futuristic, all-electric BlackFly shines is in the air. It can take off and land vertically (VTOL), and travel at a speed of 62 mph. It has a range of about 25 miles before its onboard battery needs to be recharged much like an electric car. With a rounded bottom, it sort of rocks itself into position as it lands.

Both its speed and range are limited by U.S. FAA regulations. It can go faster and farther in Canada, for example. (More on the regs below.)

Is this thing safe? Is it any fun?

Being at the forefront of personal flight, BlackFly sports three fail-safe flight systems, including a glide mode in case the power fails. There’s also an optional parachute for the cautious. And the craft has been tested rigorously, successfully transporting a full payload for 12,000 miles. The propulsion systems made it through 40,000 flight cycles, the equivalent of 25 trips around Earth.

Being so high-tech, operation of the BlackFly is purported to be pretty easy, with a simple user interface, an “intuitive joystick,” “soft-landing assist,” and even a “Return-to-Home” button. In any event, Opener will be requiring buyers of the BlackFly to have successfully completed the FAA’s private-pilot written test first.

The company says BlackFly will be capable of autonomous flight somewhere down the, er, road. 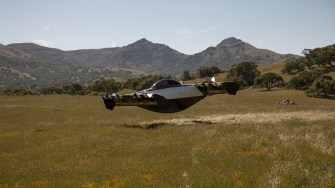 The FAA considers the BlackFly an ultralight vehicle, which limits its usefulness for escaping traffic jams—it’s only allowed to fly over non-congested areas.

More targeted regulations are unlikely to be formulated quickly enough for businesses like Opener and Uber—which expects to have flying taxis up in the air by 2023—or some members of Congress. So says the FAA’s acting administrator Dan Elwell at the Uber Elevate summit. When a suggestion was made that flying cars could be allotted their own air space, Elwell, responded, “What you just described is where we don’t want to go. You just described segregated airspace. My hope is that we don’t have to do that.” Still, he says a legal framework for flying-car operation is more a matter of when than if. FAA spokesman Les Dorr tells the Washington Examiner, “The FAA has anticipated these vehicles for some time and is working with industry to help them develop their ideas.”

Opener hasn’t yet published a price for the BlackFly, excerpt to say that “In full production, BlackFly will be the price of an SUV. We are vague about the exact price so as not to overpromise.” It hasn’t yet established a waiting list, so there’s no preordering going on yet. There is a mailing list so you can keep up with development, including air show appearances where you can see BlackFly in person. The website also lists its social media accounts.

Why name it BlackFly? Opener says, “Black flies are insects with outstanding aerodynamic and VTOL capabilities. They have the same color as the black carbon fibers in our fuselage. They are disruptive.” Well, yes. But they also bite.

We don’t need one Elon Musk. We need 8 billion empathic futurists.
▸
8 min
—
with
Ari Wallach
The Past

For centuries, the only way to travel between the Old and New World was through ships like the RMS Lusitania. Experiences varied wildly depending on your income.
High Culture

Japan’s “waste not, want not” philosophy, from meditation to Marie Kondo

“Oosouji” or “big cleaning” is much more than a chance to tidy up.
Strange Maps

Environmental activists want us to feel “flight shame” if we can take a train, instead. But this isn’t entirely realistic, even in Europe.

Jimena Canales shares the “demons” that shaped computer science.
▸
6 min
—
with
Jimena Canales
Up Next
The Present

Canada has legalized marijuana. Here’s why they did it.

The tax coffers for the entire country will be growing rapidly, and citizens of Canada will be able to access what they need.