Beer is history’s happiest accident. Though the discovery probably happened much earlier, our earliest evidence for beer dates back roughly 13,000 years ago. Around this time, the people of the Fertile Crescent had begun to gather grains as a food source and learned that if they moistened them, they could release their sweetness to create a gruel much tastier than the grains themselves.

One day a curious — or perhaps tightfisted — hunter-gatherer hid his gruel away for a safekeeping. When he returned, he found the bowl giving off a tangy odor. Not one to waste a meal, he ate it anyway and enjoyed an unexpected, though not unpleasant, sensation of ease. By pure happenstance, this ancestor stumbled upon brewing.

That’s one possible origin story, but we know that our ancestors learned to control the process, and beer took a central role in Fertile Crescent civilizations — so central that Professor Patrick McGovern, a biomolecular archaeologist at the University of Pennsylvania, argues that beer, not bread, incentivized hunter-gatherers to relinquish their nomadic ways.

Beer may also be proof of a god who wants us to be happy (Dionysus?), because the beverage* would be independently rediscovered by peoples across the ancient world, including those in China and South America.

One such peoples, the pre-Inca Wari Civilization, made beer, specifically chicha de molle, a critical component in their religious and cultural ceremonies. In fact, a study published in Sustainability in April argues that the role was so important that beer helped keep the widespread Wari civilization intact for 500 years.

Twenty years ago, a team of archaeologists with the Field Museum of Natural History, Chicago, discovered a brewery in Cerro Baúl, a mesa in southern Peru that served as an ancient Wari outpost. The brewery contained original equipment, clay storage vessels, and compartments for milling, boiling, and fermentation.

The team recently analyzed these on-site vessels to uncover the secrets of the Wari brewing process. Removing tiny amounts of material found in the spaces between the clay, they were able to reconstruct the molecules of the thousand-year-old drink. They then worked alongside Peruvian brewers to recreate the original brewing process.**

Their molecular analysis revealed several key features of the beer: The clay used to make the vessels came from a nearby site; many of the beer’s ingredients, such as molle berries, are drought resistant; and though alcoholic, the beeronly kept for about a week.

These details suggest that Cerro Baúl maintained a steady supply of chicha, limited by neither trade nor fair weather, and became a central hub for anyone wishing to partake. The Wari would likely make such trips during times of festivals and religious ceremonies. Social elites would consume chicha in vessels shaped like Wari gods and leaders as part of rituals attesting to social norms and a shared cultural mythology and heritage.

“People would have come into this site, in these festive moments, in order to recreate and reaffirm their affiliation with these Wari lords and maybe bring tribute and pledge loyalty to the Wari state,” Ryan Williams, lead author and head of anthropology at the Field Museum, said in a release. “We think these institutions of brewing and then serving the beer really formed a unity among these populations. It kept people together.”

Instead, the researchers argue, these festive gatherings (aided by the promise of beer) strengthened social capital enough to maintain a healthy national unity. This helped the Wari civilization last from 600 to 1100 CE, an impressive run for a historic civilization. 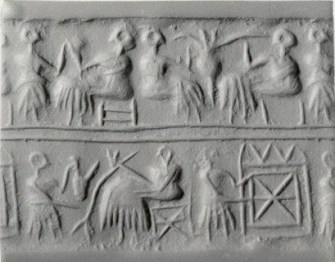 Of course, the Wari weren’t the first civilization to use beer to reaffirm bonds and maintain their social fabric. Returning to the Fertile Crescent, Sumerians regarded beer as a hallmark of their civilization.

The Sumerian Epic of Gilgamesh tells of the adventures of the titular hero and his friend Enkidu. Enkidu beings as a savage living in the wilderness, but a young woman introduces him to the ways of civilization. That orientation begins with food and beer:

“They placed food in front of him,
They placed beer in front of him,
Enkidu knew nothing about eating bread for food,
And of drinking beer he had not been taught.
The young woman spoke Enkidu, saying:
“Eat the food, Enkidu, it is the way one lives.
Drink the beer, as is the custom of the land.”
Enkidu ate the food until he was sated,
He drank the beer — seven jugs! — and became expansive
and sang with joy.
He was elated and his face glowed.
He splashed his shaggy body with water
and rubbed himself with oil, and turned into a human.”

Tom Standage, who recounts this scene in his History of the World in 6 Glasses, writes: “The Mesopotamians regarded the consumption of bread and beer as one of the things that distinguished them from savages and made them fully human.” Such civilized staples not only demarcated their orderly life from that of hunter-gatherers, they also served a key role in their culture’s unifying mythology.

Furthermore, Standage notes, Sumerian iconography often shows two people sipping from waist-high jars through reed straws. The earliest beers were consumed in a similar fashion because technological limitations prevented baking individual cups or filtering the beverage. But the Sumerians had the pottery skills to make such cups and filter the dregs. That they kept the tradition suggests that they valued the camaraderie brought by the experience, a sign of communal hospitality and kinship.

The ancient Greek’s similarly used alcohol as a means of maintaining social and political relationships — though their drink of choice was wine.

During symposiums, upper-class Greek men would gather for a night of drinking, entertainment, and social bonding. In Alcohol: A history, Rod Phillips notes that symposiums were serious affairs where art, politics, and philosophy were discussed throughout the night and could serve as rites of passage for young men. (Though, music, drinking games, and sex with prostitutes may also be found on the itinerary.)

Of course, we can amass social capital without resorting to alcohol, which has been known to damage social relationships as much as improve them.

In the 17th century, London’s coffeehouses stimulated the minds of thinkers with their caffeine-laden drinks, but also served as social hubs. Unlike the examples we’ve explored already, these coffeehouses brought together people of different backgrounds and expertise, unifying them in their pursuit of ideas and truths. Thus, coffeehouses can be seen as the nurseries of the Enlightenment.

The Field Museum archaeologists hope their research can help remind us the importance social institutions and cultural practices have in creating our common bonds, whether such institutions are BYOB or not.

“This research is important because it helps us understand how institutions create the binds that tie together people from very diverse constituencies and very different backgrounds,” Williams said. “Without them, large political entities begin to fragment and break up into much smaller things. Brexit is an example of this fragmentation in the European Union today. We need to understand the social constructs that underpin these unifying features if we want to be able to maintain political unity in society.”

So, grab a beer or coffee or tea, spend some time together, and raise a glass. Just try not focus too much on whether your friend ordered Budweiser’s swill or an overpriced, virtue-signaling microbrew IPA.

* This article uses “beer” to describe any grain-based alcoholic drink. Today, we tend to think of beer as fermented malt flavored with hops, but hops didn’t become part of the brewing process until around 1200 CE. As Phillips notes, historians use the term much more broadly.

** In the spirit of bringing some social capital stateside, the Field Museum also teamed up with Off Color Brewing, a Chicago craft brewery, to create a modern variant of the chicha. The brewers used purple corn from Peru and spiced the libation with molle berries. Their recreation is available to try, though its availability is dependent on the brewery’s supply of purple corn.

Tags
archeologycommunityfoodhistoryhumanitysocietysociologysouth america
In this article
archeologycommunityfoodhistoryhumanitysocietysociologysouth america
Related
Strange Maps
The horrors of World War II air war, in one stark map
This graph shows how badly German cities were hit by Allied bombing raids.
The Present
Radical idea: Redraw the U.S. map as a nation of city-states
While cities drive national economic growth, their political geography means they cannot effectively deal with inequality, poverty, and other socioeconomic problems.
High Culture
Why are flood myths so common in stories from ancient cultures around the world?
Could the prevalence of flood myths around the world tell us something about early human migration or even the way our brains work?
The Present
What’s effective altruism? A philosopher explains
Some effective altruists “earn to give” — they make as much money as they can and then donate most of it to charities.
The Past
The Wild West was lawless and chaotic — and the police helped keep it that way
Lawmen and outlaws were often the same people.
Up Next
The Future
Here’s how to prove that you are a simulation and nothing is real
How do you know you are real? A classic paper by philosopher Nick Bostrom argues you are likely a simulation.