It’s no coincidence that the increase of political polarization in the United States has coincided with the rise of social media and other digital technologies. How is it that something that was supposed to bring us together is increasingly tearing us apart?

The internet has fundamentally changed the way in which people interact and communicate. Many major social networks, like Twitter, Facebook, and other assorted internet forums, are most heavily populated by text-based media. Political discussion is one major component of the digital landscape. It should therefore come as no surprise that online technologies, driven by text, have also drastically changed the way we engage civically with one another – and many feel that change has not been a positive one.

A 2016 Pew Research survey found that a majority of political interactions with ideological opponents left participants feeling stressed, frustrated and angrier than when they first engaged in a discussion. Nearly half of those surveyed felt their discussions were disrespectful, uncivil and likely never to be resolved.

If we’re to engage in a mutual understanding, aim for a mature debate, and avoid knee-jerk reactions to morally outrageous content then it might be best just to turn off the screen and talk face to face. 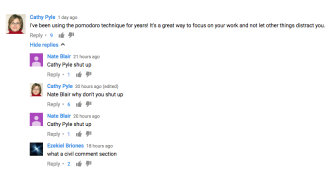 A sample from the Big Think YouTube comments section.

Discourse in person is more fitting for level-headed political conversation

Recent research from the University of California at Berkeley has shown that a person’s speech and vocal expression is psychologically one of the best ways to communicate disagreements between people.

Lead researcher Juliana Schroeder, set up four experiments with around 300 people to test their reactions to hearing about topics they felt strongly about. After each experiment, the subject had to review how they felt about each person after hearing the argument. The experimental goal was to figure out how receptions to arguments were influenced by the medium in which they were presented.

We observed an inconsistent influence of communication-medium condition in cases of agreement, but in cases of disagreement, we observed a reliable tendency for communicator to be dehumanized less when evaluators heard their voices than when evaluators read the same content… This finding suggests either that humanizing cues are unique to the voice or that such cues are redundant in visual and vocal media.

The researchers came to the conclusion that speaking in person and hearing another’s voice is a major component for when it comes to trying to understand someone with a different view and more importantly to avoid dehumanizing them. Subsequently the researchers suggest that because of this, most legitimate political conversation online would be better had offline.

It is this digital disconnect that allows people online to take a veil of anonymity and hide behind an internet persona. Oftentimes the dialogues digress into mob mentality groupthink or the conversation simply becomes a means for brandishing one’s own unfounded viewpoint. Gone are the days of wanting to engage in legitimate or view-changing conversations.

As many people know anecdotally, it’s hard for someone to change their view even in a real, physical conversation. But vocal cues and the social contract we all share between one another are more readily apparent when we’re together in the real world. The apathetic and harmful act of dehumanization is less likely to occur in a vocal conversation.

When people hold differing views there is not only a tendency to disagree with the person, but actively disparage the person as well – or as Schroeder puts it:

“Denigrating the mind of another person is the essence of dehumanization—seeing that person as less capable of thinking or feeling than oneself, as more like a nonhuman animal than like a mentally sophisticated human being.”

Much of the content that circulates online is meant to provoke visceral reactions. In a Big Think interview, neuroscientist Molly J. Crockett suggests that exposure to political topics online is designed to create outrage and not discussion. When discussing the technological basis for platforms like Twitter and Google she quotes from a study exploring moral language online:

“… [T]his study, which was led by William Brady and Jay Van Bavel and colleagues, found that each “moral emotional” word in a tweet increased the likelihood of a retweet by 20 percent.

So content that has moral and emotional qualities to it, of which moral outrage is the poster child, is the most engaging content. And so that means that the algorithms that select for what is shown to all of us in our newsfeeds are selecting for the content that’s going to be the most engaging, because that draws the most attention—because that creates the most revenue through ad sales for these companies.”

Crockett believes that the “viral” aspect of social media sharing makes any kind of quick hitting content – regardless of its lack of truth or objectivity – the main point of the issue. Essentially mere trivialities or overblown outrages take up all the space and we’re left with a meaningless conversation. It’s largely exasperated and most prevalent online and in a sense it’s built into the medium itself.

When researching how people react to this moral outrage, Crockett found that:

All this research points to one thing. Political discussion is best served on a personal basis where we truly can hear somebody out.

How Morally Outraged Are You? Well, That Depends on Who’s Watching | Molly Crockett

How morally outraged are you? Well, that depends on who’s watching | Molly Crockett

For the very first time, an AR contact lens was worn on the eye of a human subject. And it has about 30 times the pixel density of an iPhone.
Up Next
The Present

What was socialism like in the United States during the 20th century?