Americans might not be able to agree on what their healthcare system should look like, but nearly everybody agrees that the current one is about as useful as window wipers on a submarine. We’ve known for a long time that most other wealthy countries have some form of universal healthcare (defined here as a system that covers >90% of the population). But even countries that aren’t typically thought of as rich have this system. Kuwait, for instance, has universal healthcare, and it’s GDP was about $120 billion in 2017. For comparison, the state of Nebraska alone has a higher GDP than Kuwait. So do 35 other states. 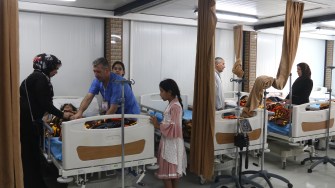 Families members visit patients in an Iraqi hospital. Iraq used to have a very prestigious and effective healthcare system, but during the last decade of Saddam’s rule and the ensuing chaos from the war, the system deteriorated drastically.

Who else doesn’t have universal healthcare?

On the Human Development Index (which evaluates countries based on factors like life expectancy, quality of life, etc.), the U.S. places 13th in the world. In the club of countries without a universal healthcare system, the next highest is the Caribbean nation Saint Kitts and Nevis, which placed at 72nd. There are 59 other countries worse off than the United States who still managed to look after most of their citizens’ lives. 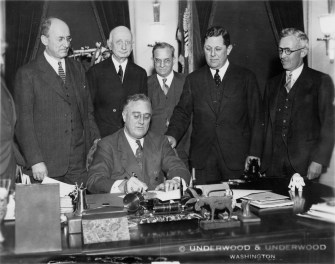 Why is the U.S., the wealthiest nation in the world, holding on to systems that the poorest countries in the world use out of necessity? There are some cultural reasons, of course, namely American’s dedication to the free market system and ideas of individualism and personal responsibility. The impact of abstract concepts like these, though, are tough to quantify.

In World War II, Franklin Roosevelt set price controls on the U.S. economy. Essentially, these limited the prices of rent, gasoline, and other resources critical to the war effort, as well as wages. Although this was a drastic step that would really rattle modern-day Americans, it was a necessary one to ensure that the war effort didn’t throw the U.S. economy into chaos. Because the war was sucking up all of these resources and labor (it’s tough to work on your farm if you’re fighting in Europe), demand was soaring. To keep prices down, Roosevelt set limits to wages, preventing them from rising too high to be unsustainable.

This meant that companies had lost one of their primary mechanisms to attract workers. Instead, they turned to one of the areas they still had control over: fringe benefits. Companies began offering pensions, paid vacations, and health insurance. Rather than a national movement for universal healthcare, unions began negotiating directly with companies to pay for their employees’ health insurance.

Not only that, but the American Medical Association (AMA) successfully fought against numerous public health plans, starting with Harry Truman’s national healthcare plan, which it labeled “a definite step toward either communism or totalitarianism.” Since the AMA represents the interests of the medical community, this makes sense. There is a lot of money to be made.

In 2016, every American paid on average $10,348 on healthcare, more than twice as much as comparably wealthy countries with universal healthcare systems. According to a 2009 OECD analysis, hospital costs and drug prices are about 60% more expensive in the U.S. than in Europe. These high prices get passed on to the galaxy of doctors, hospital administrators, and health insurance companies. The average physician’s salary has increased by 50% in the last seven years, from $200,000 to about $300,000. In the second quarter of 2017, the top six health insurance companies’ profits increased by 29% as compared to the year before, primarily due to challenges facing the Affordable Care Act in Washington during that time.

Tags
capitalismEuropehealth careInequalitypolicypovertyunited stateswar
In this article
capitalismEuropehealth careInequalitypolicypovertyunited stateswar
Related
The mind-blowing stats on male inequality
Male inequality — the enormous cultural shift happening right under our nose.
▸
15 min
—
with
Richard Reeves
The Past
Rise of the war machines: What drove the evolution of military technologies?
Historians know how military technologies evolved, but the reasons why remain poorly understood.
Strange Maps
Electricity generation by U.S. state
U.S. states vary radically in terms of electricity generation. Vermont is the cleanest, while Delaware is the dirtiest.
The Present
Twenty years after 9/11, hindsight is 20/20
Hindsight is 20/20, particularly when you have had 20 years to think about what happened.
Life
Tornado detection: bringing Stone Age tech into the 21st century
Technology designed to listen for atomic bombs can also hear tornadoes.
Up Next
Health
400 women will use ‘weed tampons’ for Harvard cannabis study
They cost about $11 and contain 60mg of THC, the main psychoactive component of marijuana, and 10mg of CBD.