Johnny C. Taylor, Jr., is President and Chief Executive Officer of the Society for Human Resource Management (SHRM), the world's largest HR professional society. As a global leader on human[…]
Go to Profile 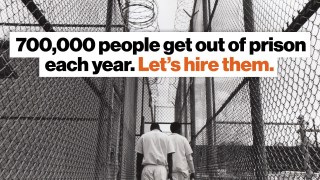 The U.S. has a talent shortage and the formerly incarcerated have paid their debt to society. Let's solve two problems with one idea.
▸
5 min
—
with
Johnny C. Taylor, Jr.

JOHNNY C. TAYLOR, JR.: I'm passionate about getting talent back to work really for three different reasons. One, and frankly it may appeal to some of your viewers, I'm a taxpayer. And anything that we can do to reduce recidivism, keep people off of the rolls as an expense, a government expense and a prison, as taxpayers, is a positive. So there's that part of me. We have 7.3 million open jobs, and only 6 million people currently looking for jobs, which means we have a talent shortage. And if we can do anything to eliminate that talent shortage, that's 1.3 million people, roughly. Every year some 700,000 or so people are released from jails and prisons in America. So we can use some of that population, that 700,000-person population, to make a dent in that 1.3 million-person deficit. So it's just practically smart.

And then the third part of me, which is more humanitarian based, is people who have made mistakes should be deserving of a second chance. It is just I mean, because all of us have made mistakes; some have been caught, some haven't. But these people have presumably paid their debt to society. And if the idea is: I make a mistake at 25 years old. I go to jail for five years or prison for five years. And then I get out. What do I have to look forward to if, forever, I'm going to wear the scarlet letter, Convict, the C, that says I'll never get another opportunity? Life is over, then.

The holy grail of this would be if we could identify people who are six months, a year, away from release and begin giving them transitional skills: work skills, life skills. Think about this. I was just meeting with someone who's been incarcerated for 25 years. The cell phone, as we know it, didn't exist then. So when they come out, they're going to have to get adjusted to all of that. The world has literally transformed in 25 years. So in an ideal state, we would begin helping them transition back into a world that they pushed the pause button on two and a half decades ago. And we've got to catch them up pretty quickly so that they acclimate and don't recidivate. That's number one. But once we do get them out, the most important thing we can do is get them back to work housing and work. And they're sort of inextricably intertwined. But housing is critical. And we've got to find places for people to have a permanent place. Mind you, they've had housing for some significant period of time. And on the outside, absent that, there's an instability that makes them more vulnerable. And then you've got to pay for that housing, which is where the job comes in.

We employers have to reach out to this population and let all of our biases go away. And we really do have to overcome our own biases. We talk about implicit bias, unconscious bias. People think, oh, that's just in the context of race and gender. Well, the fact of the matter is we have a lot of biases, one of which is a bias that we have against the formerly incarcerated. And maybe it's because of television and everything that we see in movies and the characterizations of people who are in jail, but all of that comes through, whether we're conscious of it or not, when we are talking to someone who we know has been incarcerated.

We have some interesting research that says roughly 80% of HR managers say, 'I'm interested and would be willing to hire the formerly incarcerated.' SHRM's research says there is no bias at that level. Where we get into the bias and have had it and seen it historically was customers and other employees. Those are the biggies. You know, there's this NIMBY concept, which says, 'Yeah, I like the idea of hiring the formerly incarcerated, but not to sit next to my daughter at work.' So Not In My Backyard that's the NIMBY concept. And so we've had to work on that.

Fortunately, we have some new research that says employees themselves, as a result of this narrative changing, and we're repositioning the formerly incarcerated, have said, 'I'm OK.' Three-quarters of employees have said, 'I'm OK with you bringing people into the workplace for non-violent crimes.' Similarly, about three-quarters of customers have said, 'For non-violent crimes, I'm willing to buy from a company that openly hires the formerly incarcerated, a product or service.' They're willing to do that. Those were two major hurdles in the past. And what we're seeing is as a result of us changing the narrative these are not bad people. They are people who made mistakes. And that every one of us has made them and is entitled to a second chance we're changing the narrative around hiring the formerly incarcerated, which is why SHRM is so committed to it. Again, partially, employers just need to fill this deficit. America's birth rate has been on the decline since about the year 2000. So we don't have the luxury of refusing to give opportunities to any large population of people.