David Schmidt, a geology professor at Westminster College, had just arrived in the South Dakota Badlands in summer 2019 with a group of students for a fossil dig when he received a call from the National Forest Service. A nearby rancher had discovered a strange object poking out of the ground. They wanted Schmidt to take a look.

“One of the very first bones that we saw in the rock was this long cylindrical bone,” Schmidt told St. Louis Public Radio. “The first thing that came out of our mouths was, ‘That kind of looks like the horn of a triceratops.'”

After authorities gave the go-ahead, Schmidt and a small group of students returned this summer and spent nearly every day of June and July excavating the skull. 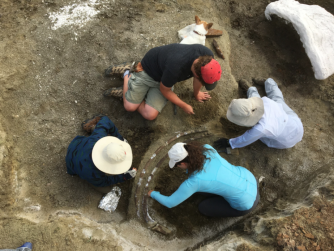 “We had to be really careful,” Schmidt told St. Louis Public Radio. “We couldn’t disturb anything at all, because at that point, it was under law enforcement investigation. They were telling us, ‘Don’t even make footprints,’ and I was thinking, ‘How are we supposed to do that?'”

Another difficulty was the mammoth size of the skull: about 7 feet long and more than 3,000 pounds. (For context, the largest triceratops skull ever unearthed was about 8.2 feet long.) The skull of Schmidt’s dinosaur was likely a Triceratops prorsus, one of two species of triceratops that roamed what’s now North America about 66 million years ago. 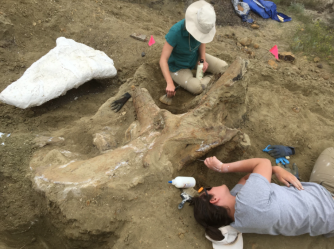 The triceratops was an herbivore, but it was also a favorite meal of the Tyrannosaurus rex. That probably explains why the Dakotas contain many scattered triceratops bone fragments, and, less commonly, complete bones and skulls. In summer 2019, for example, a separate team on a dig in North Dakota made headlines after unearthing a complete triceratops skull that measured five feet in length.

Michael Kjelland, a biology professor who participated in that excavation, said digging up the dinosaur was like completing a “multi-piece, 3-D jigsaw puzzle” that required “engineering that rivaled SpaceX,” he jokingly told the New York Times. 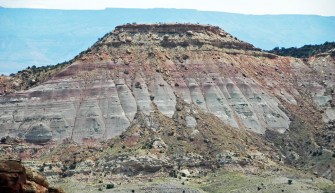 The Badlands aren’t the only spot in North America where paleontologists have found dinosaurs. In the 1870s, Colorado and Wyoming became the first sites of dinosaur discoveries in the U.S., ushering in an era of public fascination with the prehistoric creatures — and a competitive rush to unearth them.

Since, dinosaur bones have been found in 35 states. One of the most fruitful locations for paleontologists has been the Morrison formation, a sequence of Upper Jurassic sedimentary rock that stretches under the Western part of the country. Discovered here were species like Camarasaurus, Diplodocus, Apatosaurus, Stegosaurus, and Allosaurus, to name a few.

As for “Shady” (the nickname of the South Dakota triceratops), Schmidt and his team have safely transported it to the Westminster campus. They hope to raise funds for restoration, and to return to South Dakota in search of more bones that once belonged to the triceratops.

Studying dinosaurs helps scientists gain a more complete understanding of our evolution, illuminating a through-line that extends from “deep time” to present day. For scientists like Schmidt, there’s also the simple joy of coming to face-to-face with a lost world.

“You dream about these kinds of moments when you’re a kid,” Schmidt told St. Louis Public Radio. “You don’t ever think that these things will ever happen.”

There were many other species of human on the planet. Svante Pääbo discovered one of them.
Up Next
The Present

Water heist: Up to half of the world’s supply is being stolen, study finds

A new study examines the under-researched area of water theft around the world.