A state lab in Russia’s Siberia is beginning research into prehistoric viruses preserved in the remains of animals found in melting permafrost.

Spearheaded by the Vector State Research Centre of Virology and Biotechnology and the University of Yakutsk, the study will start by analyzing tissues from a prehistoric horse from at least 4,500 ago. These remains were located in the region of Siberia called Yakutia, where Paleolithic animals like mammoths are often found.

Other prehistoric animals the researchers aim to study include elk, dogs, partridges, hares, rodents, the 28,800 year old Malolyakhovsky woolly mammoth, and more. Some of the remains are up to 50,000 years old. All the animals were found because of the thawing permafrost.

One might wonder if this kind of research is in some way’s opening a Pandora’s box to ancient viruses, but this it not the first time such viruses have been studied. In fact, with the Arctic warming at twice the global average rate, the melting permafrost is likely to reveal more of its frozen content.

Maxim Cheprasov, head of the Mammoth Museum laboratory at Yakutsk University, explained in a press release that the animals being examined have undergone bacterial studies previously. However, “We are conducting studies on paleoviruses for the first time,” Cheprasov shared.

Vector scientist Dr. Olesya Okhlopkova explained that “the team of Vector Virology Centre is keen to find paleo-viruses that would allow to start development of paleo-virology in Russia and conduct leading researched in virus evolution.” 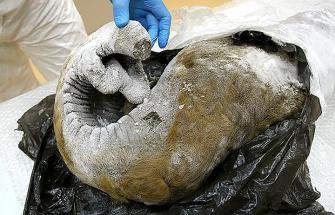 So far there has only been limited research on soft issues but the Vector team is looking to monitor the infections in the animals by segregating out total nucleic acids and sequencing the genomes to get more information on the biodiversity and the microorganisms in the ancient beasts.

“Should nucleic acids preserve, we ought to be able to get data on their composition and establish how it changed, shared Okhlopkova. “We will be able to determine the epidemiological potential of currently existing infectious agents.”

During Soviet times, the Vector laboratory, located in Novosibirsk, used to be a center for the development of biological weapons. It’s one of the two places in the world that currently stores the smallpox virus. It has also developed Russia’s second coronavirus vaccine – the EpiVacCorona.

Stockholm Syndrome is the most famous of 10 psychological disorders named after world cities. Most relate to tourism or hostage-taking.
Up Next
The Past

Record for oldest DNA ever sequenced broken by mammoth remains

One million year old mammoth DNA more than doubles the previous record and suggests that even older genomes could be found.