The Minoans, a nearly 4,000-year-old civilization from the island of Crete, have their fair share of mysteries. Though they had a writing system — scratches and dashes, called Linear A, that look like a cross between the Greek alphabet and Chinese characters — it has yet to be deciphered. They worshiped an unknown goddess often associated with snakes. Some believe them to be the original civilization upon which the myth of Atlantis was built.

One of the most compelling mysteries regarding the Minoans, though, is the origin of their (apparent) favorite sport: an acrobatic take on bullfighting called bull-leaping. 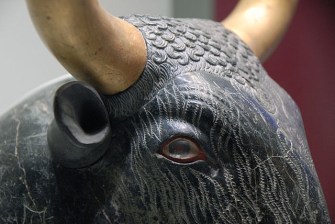 Detail on a bull rhyton from Minoa. Rhyta were typicallly horn-shaped cups with an animal’s head at the bottom. Image source: Camille Gévaudan via Wikimeda Commons

The Minoans were bona fide bull fanatics. Sculptures, jewelry, and frescoes of bulls have been found in the ruins of the many palaces that dot Crete. They created drinking horns called rhyta that ended in bulls’ heads, and the large palace at Knossos is even believed to be the location of King Minos’s labyrinth, which contained the half-man, half-bull minotaur.

One of the most common depictions of bulls in Minoan artifacts, however, is that of a man somersaulting over charging bulls. Scholars debate whether the Minoans actually partook in bull-leaping, but its undeniable that they were certainly preoccupied with it.

Based on Minoan artifacts, scholars believe that if the Minoans did, in fact, engage in this dangerous activity, the basic tactic would have happened in four phases (though depictions differ).

First, the vaulter would approach the bull; grasp the bull’s horns; use the bull’s upward, goring motion to gain momentum to flip; and then land on the ground behind the bull. This sport would have been reserved for young men from the Minoan upper class. It would have taken place in the large courtyards of Crete’s Minoan palaces, such as the one in the center of the 150,000-square-foot palace of Knossos.

The Jaw-Dropping Art of Bull-Leaping

Some scholars suggest that bull-leaping was purely symbolic and that the numerous artifacts of bull-leaping scenes simply depict a scene out of Minoan mythology. However, the scene seems to change in each instance and over time. “These variations make no sense if all the artistic renderings refer to the same single cosmic drama,” writes Professor Jeremy McInerney of the University of Pennsylvania. “If on the other hand they commemorate specific performances, the differences between various depictions are intelligible.

As with the realistic renderings of individual animals on rhyta, the scenes of bull-leaping suggest an interest in commemorating actual events rather than representing a cosmological story.”

When we look at modern bullfighting, it seems like leaping over a charging bull would be impossible or prohibitively dangerous. Modern matadors have a string of assistants who wear the bull down with lances before the matador lands the killing blow with a sword, and, arguably, killing a bull is an easier feat than leaping over it.

However, bull-leaping is still performed today. The French participate in the course landaise, in which the sauteur leaps over a charging cow rather than a bull. The Spanish, too, have recortes — shown in the video below — which involves leaping over bulls and, unlike bullfighting, rarely results in bloodshed (for the bull, at least).

The downfall of Minoa

Though the sport survives, the Minoan civilization that performed bull-leaping no longer exists. What wiped out the Minoan civilization is unclear. Without understanding Linear A, it’s impossible to use historical records to root out the potential seeds of their downfall. Archeological evidence does show, however, that a nearby volcano, Mount Thera, erupted toward the end of their time on Crete. The eruption and ensuing tsunami may have wiped out much of the Minoan’s coastal areas and hampered the production of food.

Though the Minoans survived this disaster, it’s possible that it weakened them to the point where their rivals, the Myceneans, could come and take the island from them. Archeologists have found Mycenean weaponry buried in the soil from around this time, and we do know that Crete was eventually settled by the Myceneans. And although the Minoans may have disappeared, it seems that their culture was not totally eradicated: Mycenean frescoes depict scenes of bull-leaping too.

Tags
ancient worldarcheologyarthistorysports
In this article
ancient worldarcheologyarthistorysports
Related
The Past
The Wild West was lawless and chaotic — and the police helped keep it that way
Lawmen and outlaws were often the same people.
Thinking
6 great philosophers and how they used their political power
Most philosophers merely contemplate the world, but what about the ones who actually tried to change it?
The Past
Ancient migration: Bering Strait land bridge from Asia to North America was not a one-way road
Ancient humans crossed the Bering Strait land bridge from Asia into North America. But some of them went back.
High Culture
Did Paul Cézanne hide an early self-portrait underneath a 160-year-old still life?
To answer that question, we may have to figure out when the famed painter started to go bald.
Strange Maps
Dutch government releases a genuine treasure map from WWII, sparking a hunt for the loot
X marks the spot. The Dutch town of Ommeren has been swamped by detectorists armed with shovels looking for $20-million treasure.
Up Next
Neuropsych
Jordan Peterson on the art of forgiveness
Owning your mistakes matters.