As complex as modern humans can get, they still retain some features of the earliest animals on Earth. According to new research, we are not as different as we might think from strange prehistoric organisms that didn’t have any heads, arms, legs, or skeletons.

A study from UC Riverside identified 555-million-year-old oceanic creatures that share genes with humans and other contemporary animals.

The paper’s co-author, UC Riverside geology professor Mary Droser, thinks the animals of the so-called Ediacaran era, which lasted from 571 million to 539 million years ago, were almost nothing like creatures of today.

“None of them had heads or skeletons. Many of them probably looked like three-dimensional bathmats on the sea floor, round discs that stuck up,” said Droser in a press release. “These animals are so weird and so different, it’s difficult to assign them to modern categories of living organisms just by looking at them, and it’s not like we can extract their DNA — we can’t.”

Droser and her colleague Scott Evans of the National Museum of Natural History used fossil records to tie ancient ocean dwellers to the genetics of things alive now. They looked specifically at four animals as stand-ins for the 40+ Ediacaran era species scientists have been able to identify so far. Some of the creatures under discussion were as small as a few millimeters while others got almost a meter long. These included multicellular organisms like the sea-floor-scraping Kimberella, flat oval-shaped Dickinsonia, as well as the immobilized bottom-dweller Tribrachidium.

They also studied the Ikaria, animals that were recently discovered (by a team that also featured Evans and Droser). These jelly-bean-like creatures were no bigger than a grain of rice and represented the first bilaterians in the study. As the press release explains, bilaterians are symmetrical “organisms with a front, back, and openings at either end connected by a gut.” If you’re wondering, humans are bilateral. As are spiders and pigs. The scientists think the Ikaria might have had mouths, but those didn’t get survive to be included in the fossil records. 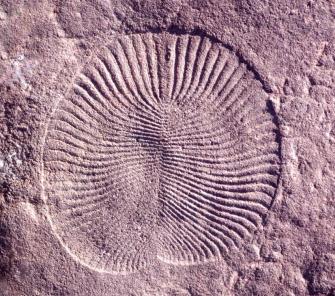 How did the creatures get around without heads? They probably had the genetic parts that could govern heads as well as the requisite sensory organs. But their genes didn’t yet work together in the complex way necessary for the heads and other sophisticated organs humans have to develop.

“The fact that we can say these genes were operating in something that’s been extinct for half a billion years is fascinating to me,” Evans pointed out.

The team plans to study the evolution of early animals further, investigating muscle development next.

Check out the study published in Proceedings of the Royal Society B. 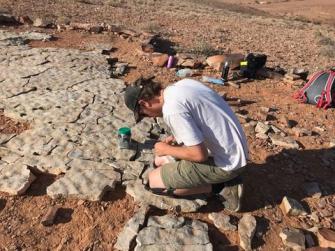 Tags
animalsbiologyevolutionfossilsgeneticsgeologyhistoryhuman bodyHuman Evolutionpaleontology
In this article
animalsbiologyevolutionfossilsgeneticsgeologyhistoryhuman bodyHuman Evolutionpaleontology
Related
Health
How saliva changes the flavor of food
“It’s a liquid, but it’s not just a liquid.”
High Culture
Why are flood myths so common in stories from ancient cultures around the world?
Could the prevalence of flood myths around the world tell us something about early human migration or even the way our brains work?
The Past
The Wild West was lawless and chaotic — and the police helped keep it that way
Lawmen and outlaws were often the same people.
Thinking
6 great philosophers and how they used their political power
Most philosophers merely contemplate the world, but what about the ones who actually tried to change it?
Life
Our antidepressant drugs are affecting animals and ecosystems
A toxicologist explains the impacts of antidepressants on fish — and no, they’re not getting any happier.
Up Next
The Past
Incredible fossil shows dinosaur sitting on preserved nest of eggs
Fossils of ancient creatures doing anything are rare. This one is absolutely unique.