The loss of information about the history of peoples can sometimes occur by accident, caused by nothing more than environmental factors. It is particularly true for genetic information in certain climates. Warm, wet climes, like that of the Caribbean, can cause the genetic material in human remains to decay long before science can examine it.

Thanks to advances in technology, geneticists can gather more information about the Caribbean people before Europeans arrived than ever before. The findings, published in Nature, shed light on their origins, numbers, and their level of interaction with others.

As mentioned above, the DNA in human remains breaks down fairly quickly in tropical environments. It is only now that we can use certain bones, those which protect the inner ear, to acquire enough material to learn about the original residents of the area.

An international team of researchers examined the remains of 174 people. The findings of a previous study that examined 93 other skeletons were also included in their analysis. Unlike many previous studies, this investigation was carried out with the knowing consent of the decedents of the island natives.

The oldest remains indicate that original inhabitants of the islands arrived there around 6,000 years ago and were related to groups living in South and Central America. These people are known as the “Archaic Age People” but who they are exactly remains unclear, as the genetic findings didn’t match any particular group in South America.

Then, around 3,000 years ago, another group of people migrated north. These Arawak-speaking, ceramic-making farmers from South America displaced the Archaic Age People. While small groups of the latter appear to have held out in isolation until 900 C.E, they eventually disappeared as a separate group of people. However, intermarriage between the two groups appears to have been rare.

The DNA also tells us that people were rather closely related across vast distances. In one case, dozens of individuals, including two men living 600 miles apart, shared as much DNA as first cousins. Such a high proportion of such cases suggests a low population with only limited levels of genetic diversity. 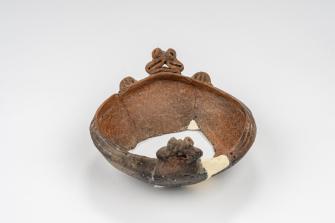 The findings upend ideas of multiple, large migrations of South American people into the region entirely. Archaeologists had previously associated different pottery styles with different eras caused by new groups of people moving in and bringing their ceramics with them. This study found no reason to suppose these migrations took place. Instead, these same people seem to have changed their style.

Additionally, the genetic similarities between the people across large swaths of time and space suggest that the populations were much smaller than previously reported. While Columbus reported millions of people living on the islands he landed on, these findings provide support estimates the population was in the tens of thousands at the time. This could have implications for our understanding of the history of post-contact interactions.

It also raises new questions about how the pre-contact peoples interacted. Genetic evidence suggests the archaic group was largely left alone, but why was that? We know that some trading was taking place between groups on different islands, but how much? Was this trade what prevented some smaller groups from suffering the adverse effects of inbreeding?

Such questions will have to be the subject of further research.

Today, every Homo species is extinct besides humans. But one of our close evolutionary relatives still lives on in our DNA.
Up Next
The Present

A deeper appreciation for science and less unnecessary spending could be in our future.