As we go about our daily lives, it’s easy to forget that the places we find ourselves weren’t always the way they are now. While people driving down Highway 163 in Utah’s Monument Valley may be awestruck by the towering red rocks, they may not think about what those rocks signify — the floor of an ancient ocean. In some places, history is simply hidden by the passage of time.

In the summer of 2020, Ranger Naturalist Greg Francek suddenly noticed he was standing in the midst of an entire petrified forest. Looking further, he discovered the fossilized remains of some of its ancient inhabitants. It soon became clear that Francek had come across one of the most important fossil sites ever discovered in California.

To protect the site, its exact location has not been revealed beyond its location nestled somewhere near the base of the Sierra Nevada foothills.

One fossil, then another 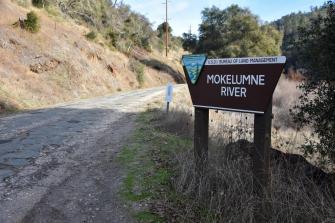 Francek was poking around the Mokelumne River Watershed east of San Francisco. He works for the East Bay Municipal Utility District (EBMUD), which has managed the land around the Pardee and Camanche reservoirs that supply water to 1.4 million people living in San Francisco’s East Bay for about a century.

Francek’s eye was caught by an anomalous shape in the dirt. Closer examination revealed it was a piece of fossilized wood. “I looked around the area further,” he recalled in a statement to EBMUD, “and I found a second tree. And then a third and so on. After finding dozens of trees I realized that what I was looking at was the remains of a petrified forest.”

A few weeks later, he says, “I located the first vertebrate fossils. What I didn’t comprehend at the time was the amazing fact that I was looking at the bones of great beasts that had roamed this landscape millions of years ago.”

Realizing he’d found something significant, Francek reached out to EBMUD, who contacted an environmental consulting firm, who in turn reached out to Chico State’s Russell Shapiro, a professor of paleontology and stratigraphy in the Geological and Environmental Sciences Department. Soon, paleontologists and geologists poured into the site, where excavation is ongoing.

Shapiro explains the excitement. “What you hope to find is a tip of a tusk. Not only do we have the tip, but we have the entire thing. And it’s just beautiful ivory. It’s mind-blowing.” He and his students are among those working the site. They describe the process in Chico State Today.

“This new find is highly significant for both the sheer volume and diversity of the fossils,” Shapiro told EBMUD. “This was a profound juncture in time when land animals evolved as forestland shifted to grassland.”

The great beasts of the petrified forest 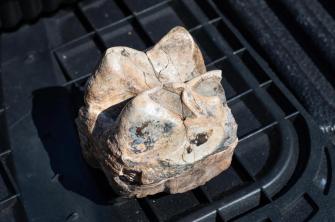 A wide variety of fossilized remains have been found in the watershed. There are the ancestors of elephants: mastodons and four-tusked gomphotheres. (The last mastodon fossils discovered in California were found in 1947 during construction of a pipeline in Contra Costa County.)

Researchers have also unearthed camel fossils (!) and a massive 400-pound salmon with spiked teeth. Add to the list tapirs, horses, tortoises, and even rhinoceroses. No other site comparable in diversity has ever been found in the Golden State. Shapiro describes the story the fossils tell:

“I can look out and picture a movie reel of the lands changing. Through the trees, I see one group of elephants peek out as another walks by, and then great horses come in.”

According to EBMUD, experts hope to find answers to an assortment of intriguing questions as work progresses: “Why are all these fossils in this location? How did they die? What happened and when?”

Unfortunately, we’ll have to wait. It will take years to complete the study of the site.

Tags
ancient worldanimalsdiscoveryfossilfossilsgeologymastodonpaleontology
In this article
ancient worldanimalsdiscoveryfossilfossilsgeologymastodonpaleontology
Related
Neuropsych
Inside the brains of aging dogs
In a citizen science project, thousands of pet dogs are helping scientists to understand what happens to memory and cognition in old age.
Life
Our antidepressant drugs are affecting animals and ecosystems
A toxicologist explains the impacts of antidepressants on fish — and no, they’re not getting any happier.
Thinking
Visual thinking: How to understand the inner lives of animals
Humans are good visual thinkers, too, but we tend to privilege verbal thinking.
Life
Scientists use CRISPR to insert an alligator gene into a catfish
Disease kills off 40% of farmed catfish. This gene protects them.
Hard Science
200 years of exploring Antarctica
What we’ve learning from the world’s coldest, most forbidding, and most peaceful continent.
Up Next
The Present
Water recycling: “Toilet to tap” is future of clean drinking water
As droughts threaten water supplies across the planet, some municipalities aim to utilize an untapped resource: sewage water.