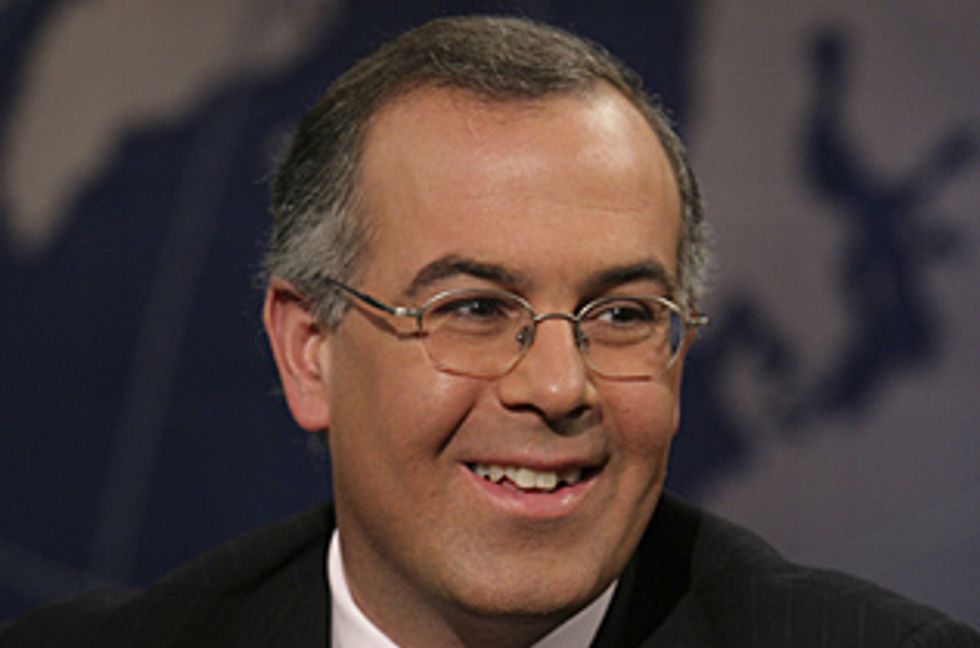 An Internet connection has only now materialized in my new Houston pad, so perhaps you'll forgive me if I kvetch about last week's David Brooks column. In the wake of the "you didn't build that" controversy, Brooks applies himself to the following question: "How much of my success is me, and how much of my success comes from forces outside of me?"

It's Brooks' view that the question "has no definitive answer," as a matter of fact, but that there is "a practical and a moral answer":

You should regard yourself as the sole author of all your future achievements and as the grateful beneficiary of all your past successes.

He then refines this idea, arguing that one ought to take less and less credit for one's success (and failure?) as one advances through the stations of life. One is to start out in one's 20s as "an Ayn Randian Superman who is the architect of the wonder that is you," proceed to "thinking like a political scientist" in one's 30s and 40s with a  "lower estimation of your own power and a greater estimation of the power of the institutions you happen to be in," then in one's 50s and 60s advance to an "understanding that relationships are more powerful than individuals" ("like a sociologist"), and then, finally, in one's golden years, "[y]ou’ll be struck by the astonishing importance of luck," as ancient historians allegedly are.

This is characteristically confused and confusing. Brooks' initial "practical and moral answer" is not his actual answer. His actual answer is: "It depends on how old you are." Then, as he expounds his idiosyncratic theory of the individual's evolving  conception of the locus of responsibility over the life-cycle, Brooks skips sloppily from prescriptive to descriptive language. He is, remember, proposing "a practical and moral answer" to the question of how much responsibility for success (and failure?) one should assign to oneself. Yet he writes as though 60 year-olds typically do come to think like sociologists, which is obviously false, when he means that they practically or morally ought to come to think like sociologists.

In his penultimate paragraph, Brooks declares that "as maturity develops and the perspectives widen, the smaller the power of the individual appears, and the greater the power of those forces flowing through the individual." So, it's Brooks' view that the fully mature individual, who has achieved a panoramic perspective on life, understands that individual agency is swamped by impersonal forces. If that's not a "definitive answer" about the relative role  of individual initiative in individual success, what is it? Anyway, if there's really "no definitive answer" to the factual question, how does Brooks arrive as such a definitive answer to the practical and moral question?

Great companies, charities and nations were built by groups of individuals who each vastly overestimated their own autonomy. As an ambitious executive, it’s important that you believe that you will deserve credit for everything you achieve. As a human being, it’s important for you to know that’s nonsense.

So Brooks started out lying. He does think there's a definitive answer to the descriptive question: very, very little of what we accomplish is ultimately due to us. He must also think that his readers are incredibly dumb. Why not just come out and say that we can't handle the truth, and that it's important for wise people like David Brooks to lie to the rest of us so that we don't languish in poverty, subjection, and truth?

Well, I guess if you think that's true, you probably also think you shouldn't say so. But Brooks does say so, right there in the last paragraph! Well, if it's okay to say so, and pretty transparently, after talking nonsense for a while, then it's probably okay to just leave out the nonsense and say it straight. The folks who need fooling don't read the Times anyway.

The fact that Brooks is philosophically committed  to mendacity aside, the truth of the matter is really not so tricky. In any endeavor, individual effort generally plays only a small role in achieving the desired result, when compared to the contribution of all other relevant causal factors. Still, the success or failure of most human endeavors depend critically upon the supply of effort, and most endeavors will fail if too little effort is supplied. In some circumstances, a realistic assessment of the effect of greater effort on the odds of success will be demoralizing, leading to less effort and even lower odds of success. But this doesn't mean that successful people need to be systematically deceived about the efficacy of volition. It means that people need to internalize norms that stigmatize, at least some of the time, the rational withholding of effort.

Of course, people aren't generally self-destructive, and this sort of thing (i.e., morality, culture) only goes so far, even if it does goes pretty far. Incentives matter, as the economists like to say. You won't write try to write the Great American Novel if you don't think you can. But, even if you think that there's some small positive probability you could succeed, it may not be worth trying unless the payoff for success is really huge. Do the math. Which is why winner-take-all markets and the vast wealth and status inequalities they entail may not be so bad for the commonweal. A more egalitarian distribution of money and status for novelists would result in a decreased overall supply of novel-writing effort, and thus to fewer and fewer really valuable novels. (The stats quo also leads to a lot of wasted effort, but so what!) If widespread false belief doesn't work, try inequality!

That said, a smart culture can probably limit wealth inequality while maintaining the possibility of huge inequalities of status, which is why I suspect Ed Conard, whose book I have not read, overstates the case for economic inequality. Successful cultures produce individuals who try hard, because that's what one does, and who dream of riches and/or glory. Maybe successful cultures also produce individuals deluded about the efficacy of the will, too, as Brooks seems to think. But I really don't think there's any risk in talking about openly about the possibility. I mean, watch:

God is dead! Nothing matters! Your life is a worthless, insignificant blip in an endless blank expanse.