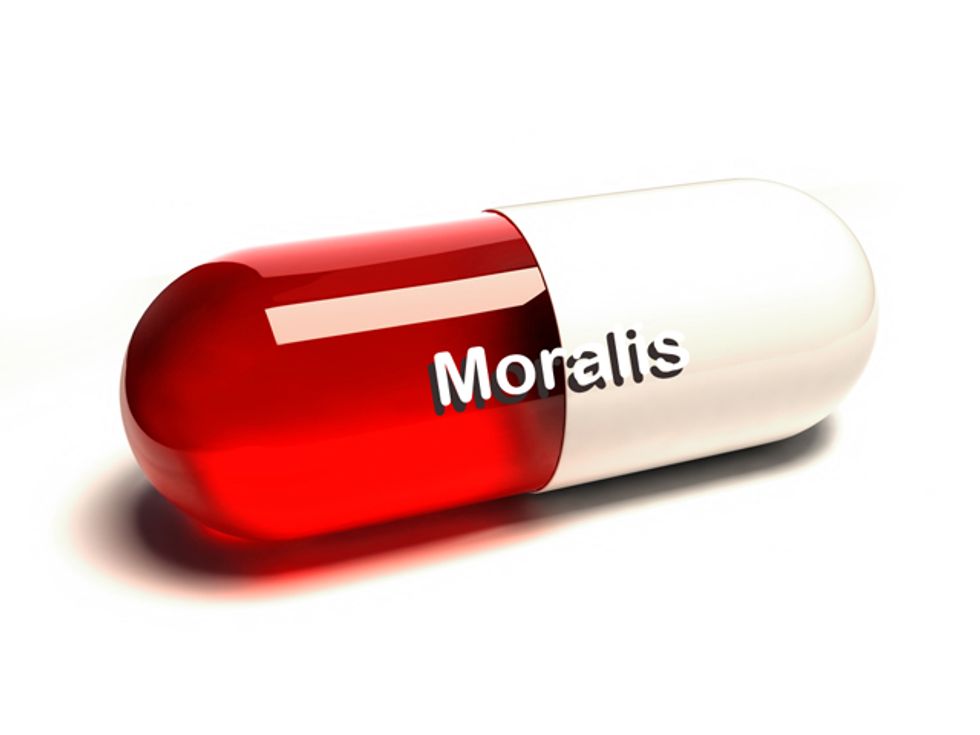 Writing in the New York Times, Peter Singer and Agata Sagan ask "Are We Ready for a 'Morality Pill'?" I dunno. Why?

The infamous Milgram and Stanford Prison experiments showed that given the right circumstances, most of us act monstrously. Indeed, given pretty mundane circumstances, most of us will act pretty callously, hustling past people in urgent need in simply to avoid the hassle. But not all of us do this. Some folks do the right thing anyway, even when it's not easy. Singer and Sagan speculate that something special must be going on in those peoples' brains. So maybe we can figure out what that is and put it in a pill!

The answer is: no. And I think the question invites confusion. Morality is not exhausted by helping. Anyway, help do what?

Singer is perhaps the world's most famous utilitarian, so maybe he's got "help people feel more pleasure and less pain" in mind. Since utilitarianism is monomaniacally focused on how people feel, it can be tempting for utilitarians to see sympathy and the drive to ease suffering as the principal moral sentiments. But utilitarianism does not actually prescribe that we should be motivated to minimize suffering and maximize happiness. It tells us to do whatever minimizes suffering and maximizes happiness. It's possible that wanting to help and trying to help doesn't much help in this sense.

Most contemporary moral psychology begins from the assumption that the primary role of a morality is to solve coordination problems--to facilitate mutually beneficial cooperation, to detect and punish free-riders, to promote a climate of trust through costly signals of adherence to group norms, and so on. If utility is maximized by societies capable of making the crucial transition from small-group to large-group cooperation, the most important moral emotions from a utilitarian perspective will be those that embody and reinforce the norms of the extended order of impersonal exchange. But there are many ways one might be disposed to "help" in this context.

The stability of welfare-enhancing group norms often requires that some among us be willing to harm ourselves punishing norm-violators. "Altruistic punishment" is the term of art. Altruistic punishers might be nasty people. Their willingness to "help" may take the form of streaks of dogmatism and vindictiveness. Or, if Deirdre McCloskey is right that the era of modern economic growth was the product of the rise of specific bourgeois virtues, one way to "help" may be simply to internalize certain commercial norms, which may or may not include and inclination to go out of one's way to help those in need.

Of course, it may be very important that some people, animated by sympathy, go out of their way to help those in need, and to agitate for their interests. But it may be just as important that others not worry too much about these things and instead apply themselves wholly to building successful businesses within the rules.

There is no one morality. There are many ways for humans to live with one another, and each way has a characteristic complement of moral sentiments and norms. If, like Singer, we are utilitarians, we need not be too vexed by the problem of identifying the best morality. The best morality--the one that produces the largest sum of happiness--is the morality of liberal market societies. Call this "bourgeois morality." Bourgeois morality not only has ample space for significant variation in moral personality, it probably requires a division of moral labor. We need some bleeding hearts, some altruistic punishers, some status-driven go-getters, and no doubt much more.

If forcing criminals to huff oxytocin makes for kinder, gentler malefactors, then maybe that's not a bad idea. But we shouldn't confuse morality as such with a single kind of other-regarding, sympathetic, solidaristic helpfulness. That's simple and silly. Like the idea of a "morality pill."

Indeed, it's a mistake to think making people more moral has that much to do with neurochemistry, as opposed to rule-following, norm-internalization, and instinct harnessing. There is little hope for making humans less vain, ambitious, and grasping, and it's not at all clear that doing so would really "help." Moralities that manufacture heaps of happiness don't abolish selfishness, chauvinism, or status-seeking. They civilize and channel our baser drives into useful forms of expression. It doesn't matter if the gal who cures cancer is an asshole only in it for the glory. Indeed, we promise splendid everlasting fame to she who discovers the cure precisely to recruit the talents of glory-motivated assholes. A pill that turns assholes into helpful good sams may make a world where there's more willingness to help, but also fewer and shoddier tools for helping.

There ain't no pill for getting the rules right.