The Pokemon Go craze is finally reaching an equilibrium. The game had a stellar run while it lasted, but over the last few weeks Pokemon Go has seen a steady drop-off in daily active users (DAUs).

As of August 18th, Axiom Capital Management reports the app had a little over 30 million DAUs, down significantly from its July 19th peak of slightly under 45 million DAUs. At one point, this app had overtaken Twitter in the United States, but the popular game seems to be settling after the summer hype. 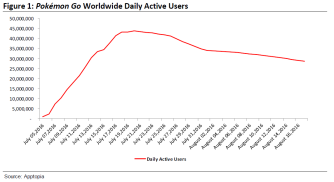 This decline was predicted by many media outlets.

Craig Chapple, editor of mobile games trade publication PocketGamer.Biz, is one of many game journalists who saw the inevitable fall. “It’s rare for games to explode in popularity like Pokemon Go has, but a drop in users was always expected after a big launch,” he told the BBC.

It should be noted, however, that Pokemon Go still sits on the list of top grossing games within iOS and Android app stores. But Chapple warns the drop-off could continue.

“Pokemon Go is unique,” he told the BBC. “At the moment it relies on people in your local area playing with you, not someone on the other side of the world. If the numbers continued to drop so dramatically, who will be left to play you in your small, local town?”

Because of this unique aspect of the game, Niantic may see its greatest losses among smaller communities.

Since day one, those who live in smaller towns have voiced their frustrations that the game has somehow left them behind. Rural areas are Poke-deserts with no PokeStops or Gyms for gamers to congregate. It has barred many people from feeling that crucial social aspect of the game. This issue is where the game may be seeing its most dramatic drop-offs begin. Pokemon Go may remain more of an urbanite’s game until Niantic is able to find a balance.

Niantic may be able to bring players back when it adds new features, like trading and hunt for Legendary Pokemon, but it’s difficult to say if these will be enough to lure users in more remote locations back.

Tags
augmented realityCraig ChapplefadLegendary Pokemonmobile gamingNianticphasepokemonPokemon Goshort-lived
In this article
augmented realityCraig ChapplefadLegendary Pokemonmobile gamingNianticphasepokemonPokemon Goshort-lived
Related
The Future
MIT artificial intelligence tech can generate 3D holograms in real-time
A new method could make holograms for virtual reality, 3D printing, and more. You can even run it can run on a smartphone.
The Future
Why virtual reality is necessary on a planet of 11 billion
Virtual reality is more than a trick. It’s a solution to big problems.
▸
11 min
—
with
Big Think
The Present
New Google AR exhibits let you see prehistoric creatures up close
Google’s Arts & Culture app just added a suite of prehistoric animals and NASA artifacts that are viewable for free with a smartphone.
Partnerships
What is the viewing experience of VR porn really like?
Recent studies suggest virtual reality porn can produce a more positive experience than viewing from a monitor or screen.
The Present
A new device generates energy from shadows
By leveraging the difference between lit and shadowed areas, a new energy source perfect for wearables is invented.
Up Next
Hard Science
NASA Is Putting Its Research Papers Online For Free
NASA will be putting most of the research it funds online for free in policy of open access to science.