At first glance, the driverless car sounds great. In 2013 alone, there were 1.25 million car crash deaths worldwide. So self-driving cars, if they are as safe as we’re told, should save a lot of lives per year. There are other benefits. Drunk driving won’t be the scourge it once was. A long commute in one study, was found to damage relationships. But perhaps if one doesn’t have to drive, they can Skype with their sweetheart, instead. Commuters can avoid traffic-related stress, study, get some work done, have a cocktail, or find interesting ways to steam up the windows with a fellow passenger.

There is one evident drawback, thus far. This is yet another instance of mechanization swallowing jobs. Cab drivers and long-haul truckers better have a backup plan. Their days are numbered. As are those of Uber drivers. The problem with widespread adoption of new technology is, there are always unforeseen ramifications.

Advances in rocketry for instance, brought us missiles and the space race, Teflon, Velcro, the microwave, and even Tang. It also brought us the ever-present threat of nuclear annihilation, though far less considerable now than it once was. Ponder if you will, all the changes the internet has brought us, both good and bad.

So what might be the unforeseen consequences of driverless cars? That’s a thorny question you’ll never get to the bottom to, until such cars are prevalent. Nevertheless, scientists, journalists, futurists, and others, are scrambling to understand all the possible implications. But one thing is becoming uncomfortably clear, if you’re prone to motion sickness, you’d better hope your health insurer covers Dramamine. 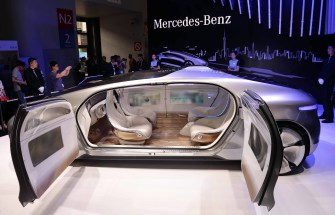 The driverless car is set to usher in a new model of transportation. But certain concerns loom.

A study from the University of Michigan last year, warned of a significant increase in the number of people experiencing car sickness, over 27% more that before. 6-10% of passengers are expected to regularly experience queasiness over the course of the ride. Rather than a tablet, you might be holding a sick bag.

Researchers at U-M’s Transportation Research Institute say that there are features inherent in driverless cars that make the risk of car sickness more likely. Not keeping one’s eyes on the area of motion, and being unable to anticipate which way the car will go, increases the likelihood of motion sickness.

The fact that you won’t be engaged in driving the car, makes you more likely to have your stomach turn, researchers found. Those who are prone know that keeping their eyes on the road is less likely to cause symptoms. But reading, playing games, or becoming immersed in one’s smart phone, makes one more prone.

Some technological fixes, such as panoramic views or larger windows have been suggested as a workaround. Another idea is having windows as part of the electronic display, and having screens move with the motion of the vehicle. Critics argue that such bells and whistles are unlikely to lower risk. The likely end result is that we won’t be multi-tasking like crazy, but we won’t have to drive either.

Things get more complicated, as they tend to do with a paradigm shift. There is still much debate on how motion sickness actually comes about. A recent study published in Human Molecular Genetics, shows evidence supporting a hereditary predisposition.

Another theory states that motion sickness is a conflict between what’s registering in the eyes with the vestibular system of the inner ear—responsible for balance. When what you see doesn’t match up with the motion your body is feeling, your stomach turns. 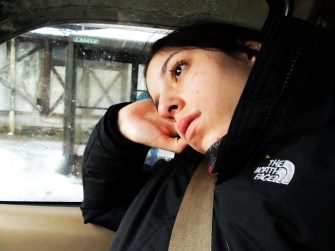 A conflict between what your eyes see and what your inner ear registers could cause motion sickness.

Say you are watching a scene where an out-of-control train is careening off of a cliff. Though your eyes say you’re going down with it, your feet are planted firmly on the ground. It’s this conflict that’s said to cause queasiness. Here, screens which follow the pace and direction of movement might help. So your tablet would be projected onto the windshield and would bob and flow with the motion of the vehicle.

Kinesiology professor Tom Stoffregen of the University of Minnesota, says that rather than a conflict between the input of the eye and the calculations of the inner ear, motion sickness has to do with postural stability. The body itself is never completely settled. Stand perfectly still and you’ll soon realize there are a series of muscles supporting you. A smidgen of movement keeps you aloft. Prof. Stoffregen calls this sway. It’s hardly noticeable. But it’s there.

When your body moves in a way you don’t tell it too, you begin to feel ill. Stoffregen calls it a conflict between, “postural movement and postural outcome.” The genetic findings support both hypotheses, unfortunately. What further confuses the issue is that certain people are prone to motion sickness, while others aren’t.

In terms of driverless cars, no one knows for sure if more people are going to get car sick, due to their proliferation. But all indicators point to it being likely. Even so, sooner or later, adjustments will lower this risk. Such a concern is unlikely to stop the advent of the driverless car, particularly since it offers so many benefits.

The electric car manufacturer says updates to its battery design and manufacturing process will help lower production costs.
The Future

It looks like Tesla just developed a million-mile battery

Such a battery would make it far cheaper to implement robotaxis and long-haul electric trucks, both of which Tesla is developing.
The Present

The 2020 Democratic candidate’s plan to give Americans a universal basic income seems to include a special provision for truckers.
Up Next
The Present

This App Collects Data on How Frequently Women Are “Manterrupted”

There’s an app that detects manterruptions—but we round up the research to find out which groups of people are really doing the most interrupting.