Imaginative as humans are, it’s often hard not to see historical figures depicted in black-and-white photos as being somehow of another species. Confronted with colorized images can be startling — hey, they look like us — bringing home at last what they were really like. Maybe that person evens look like someone we know.

The same is true of figures whose appearance we know only from their statues, maybe even moreso. We may know their names and something about them, but, again, it’s all sort of not quite real. Now cinematographer and virtual reality designer Daniel Voshart has published amazing, life-like images of 54 Roman emperors based on their statues. He used machine learning and filled in the (many) remaining blanks with his imagination. While he’s careful to point out that his renderings are merely what these individuals may have looked like, they’re remarkably plausible, and also remarkably familiar.

Voshart describes the whole thing as a quarantine project that got out of hand, but lots of people are excited about what he’s done, and are purchasing posters of his Roman emperors. 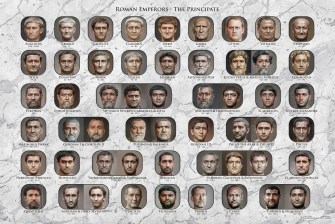 Voshart’s imaginings began with an AI/neural-net program called Artbreeder. The freemium online app intelligently generates new images from existing ones and can combine multiple images into…well, who knows. It’s addictive — people have so far used it to generate nearly 72.7 million images, says the site — and it’s easy to see how Voshart fell down the rabbit hole.

The Roman emperor project began with Voshart feeding Artbreeder images of 800 busts. Obviously, not all busts have weathered the centuries equally. Voshart told Live Science, “There is a rule of thumb in computer programming called ‘garbage in garbage out,’ and it applies to Artbreeder. A well-lit, well-sculpted bust with little damage and standard face features is going to be quite easy to get a result.” Fortunately, there were multiple busts for some of the emperors, and different angles of busts captured in different photographs.

For the renderings Artbreeder produced, each face required some 15-16 hours of additional input from Voshart, who was left to deduce/guess such details as hair and skin coloring, though in many cases, an individual’s features suggested likely pigmentations. Voshart was also aided by written descriptions of some of the rulers.

There’s no way to know for sure how frequently Voshart’s guesses hit their marks. It is obviously the case, though, that his interpretations look incredibly plausible when you compare one of his emperors to the sculpture(s) from which it was derived.

For an in-depth description of Voshart’s process, check out his posts on Medium or on his website.

It’s fascinating to feel like you’re face-to-face with these ancient and sometimes notorious figures. Here are two examples, along with some of what we think we know about the men behind the faces. 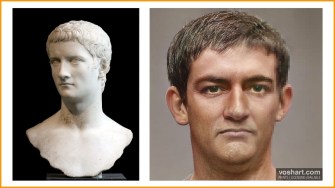 Caligula was the third Roman Emperor, ruling the city-state from AD 37 to 41. His name was actually Gaius Caesar Augustus Germanicus — Caligula is a nickname meaning “Little Boot.”

One of the reputed great madmen of history, he was said to have made a horse his consul, had conversations with the moon, and to have ravaged his way through his kingdom, including his three sisters. Caligula is known for extreme cruelty, terrorizing his subjects, and accounts suggest he would deliberately distort his face to surprise and frighten people he wished to intimidate.

It’s not totally clear if Caligula was as over-the-top as history paints him, but that hasn’t stopped Hollywood from churning out some howlers in his name.

A 1928 journal, Studies in Philology, noted that contemporary descriptions of Caligula depicted him as having a “head misshapen, eyes and temples sunken,” and “eyes staring and with a glare savage enough to torture.” In some sculptures not shown above, his head is a bit acorn-shaped. 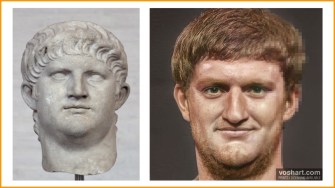 There’s a good German word for the face of Nero, that guy famous for fiddling as Rome burned. It’s “backpfeifengesicht.” Properly named Nero Claudius Caesar Augustus Germanicus, he was Rome’s fifth emperor. He ruled from AD 54 until his suicide in AD 68.

Another Germanicus-family gem, Nero’s said to have murdered his own mother, Agrippa, as well as (maybe) his second wife. As for the fiddling, he was a lover of music and the arts, and there are stories of his charitability. And, oh yeah, he may have set the fire as an excuse to rebuild the city center, making it his own.

While it may not be the most historically sound means of assessing an historical personage, Voshart’s imagining of Nero does suggest an over-indulged, entitled young man. Backpfeifengesicht.

Drones have a lot to learn from the landing abilities of birds.
Starts With A Bang

Cities overstimulate our senses and are full of people we don’t know. Maybe humans were meant for this.
13.8

Spoiler alert: Everyone dies.
Up Next
Starts With A Bang

The Twin Jet nebula, shown here, is a stunning example of a bipolar preplanetary nebula. At the center, a dying star is in the final stages of life where it […]