Let’s say you are busy career woman who wants to select a sperm donor in order to have a child. Would you use a smart phone app to do it? The London Sperm Bank thinks you might. The institution is taking a new approach to this sensitive and complex process, modeled curiously on the dating app, what some might call a hook-up app, Tinder. Women can select options on very specific characteristics such as occupation, ethnicity, personality type, height, weight, education level, and even hair color.

Professions one can chose from include engineering, law, medicine, finance, hospitality, and the performing arts. For personality traits, descriptors like shy, well-mannered, having a “strong character,” or being a “profound thinker” are used. The men’s passions are also included, such as martial arts or photography.

Launched on Sept. 21, the sperm bank is marketing the app as a way to “plan your family on the go.” Instead of names, file numbers such as “Donor 1001” come up. This protects the donor’s identity, just as with the normal procedure. Not only does it allow you to swipe left and right, you can even make a “wish list,” containing your preferences. Alerts will pop up on your phone, if and when a candidate matching those traits enters the system, eliminating the search process altogether. 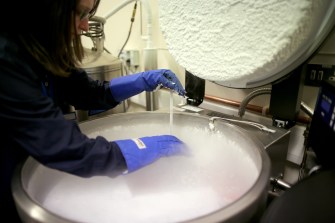 The London Sperm Bank is the UK’s largest. Over 10,000 donations are housed within. Scientific director Dr. Kamal Ahuja said that he and colleagues moved in this direction because they wanted to provide a way for transactions to occur online. “This allows a woman who wants to get a sperm donor to gain control in the privacy of her own home and to choose and decide in her own time,” he said.

When you make a selection, the donation is rushed off to the woman’s fertility specialist, where it is prepared for the oncoming procedure. Even payment can be made through the app. Whether you order through a catalog or your phone, the price is the same. Some in the UK are hailing the app as a convenient and efficient way to deliver fertility services, while catering to the needs of modern women. But it is not without critics.

Naysayers argue that choosing a sperm donor by ethnicity, hair color, and other such biometrics, increases already narrow-minded and shallow tendencies, which cloy to the sperm bank model today. Others go farther still, saying this is yet another milestone on the road toward designer babies.

Josephine Quintavalle is one outspoken critic. She is the director of Comment on Reproductive Ethics, a pro-life group. “How much further can we go in the trivialization of parenthood?” she said. “This is the ultimate denigration of fatherhood.”

Though some may see it as dreadful, in the legal sense, the app’s operation is airtight. Each donation is examined by the British Fertility Society, the British Andrology Society, and the Human Fertilisation and Embryology Authority (HFEA). As long as a donor is free of genetic diseases or infections, and the sperm is healthy and can withstand freezing, everything moves forward as planned.

To learn more about this new app click here:

White & Black Teachers Are Harder on Black Preschoolers, But Differently

A Yale study finds implicit racial bias in a study of 132 white and black preschool educators, but in different ways.