Mexican scientists discovered the world’s largest flooded cave system that extends an amazing 216 miles (347 km) and is filled with artifacts. The maze of caves is a major archaeological find that promises to shed light on the mysteries of the Mayan civilization.

Underwater archaeologist Guillermo de Anda of Mexico’s National Institute of Anthropology and History led the Great Maya Aquifer Project (GAM), which has been exploring underwater caveson the Caribbean coastline of the Yucatán Peninsula in Mexico for decades. The region has 358 freshwater flooded cave systems that stretch for over 870 miles (1,400km).

De Anda explained that their accomplishment has wide-ranging significance:

“This immense cave represents the most important submerged archaeological site in the world,” said de Anda. ”It has more than a hundred archaeological contexts, among which are evidence of the first settlers of America, as well as extinct fauna and, of course, the Maya culture.”

The current research effort took 10 months and proved that two caves systems – the Sac Actun System and the Dos Ojos caves are actually part of one continuous and, certainly gigantic, cavity in the Earth. 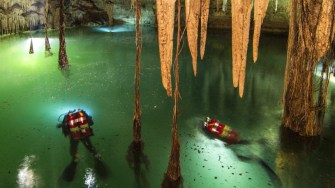 Inside the cave system. Credit: GAM

“It was like trying to follow the veins within a body,” said Schmittner. “It was a labyrinth of paths that sometimes came together and sometimes separated. We had to be very careful.”

Now that the researchers showed that the two cave mazes are linked, they think another three underwater cave systems can be added to what is already the longest cave labyrinth in the world. 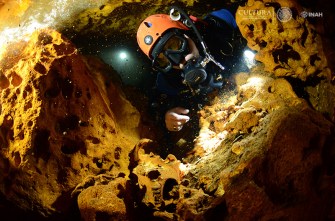 The impressive caves present an invaluable scientific loot, with divers finding a large amount of Mayan artifacts like ceramics, remains (including those of early humans, giant sloths and tigers) and extinct fauna.

Check out this video about the find, which has some great footage:

Related
Starts With A Bang
Ask Ethan: What are white holes, and do they really exist?
In General Relativity, white holes are just as mathematically plausible as black holes. Black holes are real; what about white holes?
Life
Strange life forms create an “alien” ecosystem in an abandoned uranium mine
Slimy biofilms made up of bacterial and eukaryotic life forms have taken over an abandoned, flooded uranium mine in Germany.
Hard Science
Earth has an eerie “sodium glow,” and astronomers use it to image stars
Air currents in our atmosphere limit the resolving power of giant telescopes, but computers and artificial stars can sharpen the blur.
Health
How saliva changes the flavor of food
“It’s a liquid, but it’s not just a liquid.”
High Culture
Why are flood myths so common in stories from ancient cultures around the world?
Could the prevalence of flood myths around the world tell us something about early human migration or even the way our brains work?
Up Next
Technology & Innovation
This tropical forest is flowering thanks to climate change
Researchers find an unexpected side effect of rising carbon dioxide levels in a remote tropical forest.