Americans were surprised to discover the political implications of social media because, to many of us, the notion that platforms used for sharing baby pictures and arguing about diets could be used as propaganda tools probably should not have surprised us. Yes, you could probably say that about any tool, yet Americans were still shocked by the insidious tactics of deception foreign agents in the last election cycle. Techniques used by the Jennings seem quaint by comparison.

Eventually, every medium is used in ways the creators never intended, or perhaps even dreamed up. The creation myth of Facebook as an online rating tool for college females does not exactly imply an eventual mechanism for overthrowing the democratic process. But sometimes hindsight affords us the gift of foresight. The question is, will we learn?

Given the line-up of this year’s Tribeca Immersive at the Tribeca Film Festival, filmmakers are certainly learning something about how to utilize the growing immersive experience that Virtual Reality offers. Filmmakers are transforming the burgeoning medium of VR specifically into a political tool. We have to wonder how much this domain of entertainment is even designed to entertain at all. 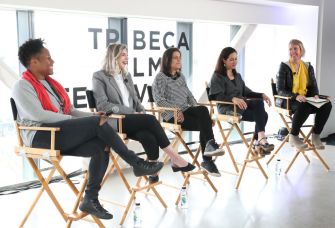 Among the topics at this year’s immersion, writes Angela Wattercutter, are “racism, the impact of atomic bombings, climate change, gentrification, LGBTQ equality, airport interrogation of Muslim travelers, and the white supremacy movement in the US.” An exhaustive breadth of social issues in a medium that’s mostly been used by gamers and pornography directors. Yet all media has served a social role. Writing began as an accounting tool for keeping track of livestock and goods, which is essentially a social tool. Perhaps all media has always exhibited this quality.

Still, VR will shape not only entertainment but how we relate to one another (just as writing did). VR as an experience is even changing mall culture. Here in Los Angeles, an immersive pop-up has been sold out for months; the Tribeca Film crew launched a similar project at the World Trade Center site two years ago. While these experiences arguably have some social impact, their focus is on the intersection of entertainment and retail. That’s not what others are aiming for.

Columbia professor Courtney Cogburn has researched the subtle gestures and microaggressions rampant in racism. She was part of the crew that helped Tribeca create a space for viewers of 1,000 Cut Journey to process what they had just experienced. The film was specifically created for viewing by liberal whites, according to Cogburn. Her hope is that it will have a transformative power in their day to day reality, offering them a virtual opportunity to empathize with what minority populations encounter on a daily basis.

From an empirical sense, I’d want those people to be more open to listening and maybe receive a new story differently or see data differently as a result of having gone through an experience like this.

Sol Rogers, founder & CEO of virtual reality company, REWIND, notes that politicians are also getting in on the game. Barack and Michelle Obama collaborated with an effects house to create a virtual tour of the White House, which Rogers says offers citizens a view inside of one of the most exclusive addresses in the world. While he states that VR companies are exploring more “positive possibilities,” he does recognize the potential for wicked ends, such as mass surveillance.

Stanford professor Fred Turner cites a 1922 statement from reporter Walter Lippmann, who noticed how photography was shaping public sentiment during World War I, and how that could be used to manipulate said public. Whoever publishes photographs that frame certain messages hold political persuasion over voters.

The distance between photographs and VR and Augmented Reality platforms is vast. Turner believes the persuasive power of devices like the Oculus Rift can alter the entire landscape of politics.

As the Oculus Rift and other devices come to market, we need to ask what it might mean to not simply see pictures in our heads, but to feel them, to live with and within them, moment by moment.

Turner does not deny VR’s positive applications, what he calls a tool for “re-humanizing the media landscape.” He discusses virtually walking through Los Angeles’s infamous Skid Row, waiting for aid atop structures during Hurricane Katrina, and traveling through a Syrian refugee camp as examples for building empathy—many of the same qualities professed by Tribeca filmmakers. 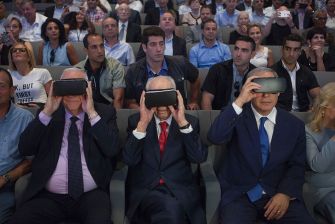 Exposure is a powerful antidote to ignorance. In this light, VR and AR create experiences inside the headset that resonate outside of it. This could be a means for creating something closer to democracy than we currently experience. Through a shared understanding of the suffering and ordeals of others, we form closer bonds with those we never actually meet.

Not that utopia is pending. Social media was supposed to bring us closer together, and in some ways it has. But we don’t all play by the same rules. It’s easy to imagine a populist leader creating a virtual reality akin to North Korea. It’s also easy to foresee corporations building worlds in which only their products and services work.

If immersive media are to truly serve democratic ends, we will need to confront not only the new psychological power of virtual environments, but the persistent political and economic powers of the world outside the headset.

Which has always been difficult. Regardless of what reality we choose, there will be no easy answers to something as complex as human nature.

Related
Life
Our antidepressant drugs are affecting animals and ecosystems
A toxicologist explains the impacts of antidepressants on fish — and no, they’re not getting any happier.
The Past
Ancient migration: Bering Strait land bridge from Asia to North America was not a one-way road
Ancient humans crossed the Bering Strait land bridge from Asia into North America. But some of them went back.
Sponsored
Want to boost your happiness? Buy experiences, not material possessions
Some experiences continue to pay dividends time and time again.
High Culture
Did Paul Cézanne hide an early self-portrait underneath a 160-year-old still life?
To answer that question, we may have to figure out when the famed painter started to go bald.
Strange Maps
Dutch government releases a genuine treasure map from WWII, sparking a hunt for the loot
X marks the spot. The Dutch town of Ommeren has been swamped by detectorists armed with shovels looking for $20-million treasure.
Up Next
Culture & Religion
Are religious people more moral?
Why do people distrust atheists? And are they right to do so?